I have the same problem reviewing you as I do Courtney Milan. As in, do I really have the temerity to criticize such an amazing writer? Apparently the answer is yes because while Beguiling the Beauty was beautifully written, I wasn’t feeling the romance. This may be an “it’s not you, it’s me not liking the masquerade trope thing” but at the end of the book, I hadn’t been convinced of the HEA. 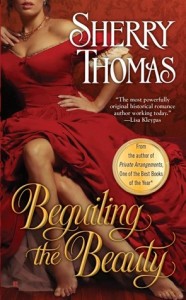 Venetia Townsend is one of the most beautiful women in all of the world. One look at her face when Christian de Montford, Duke of Lexington, was young man and he was dumbstruck and tumbled instantly in love. Unfortunately for Christian, Venetia was already married and it was his first realization that he, a pampered Duke, might be ordinary.

Christian felt as if he were falling from a great height.

He’d always considered himself a breed apart. Now he was just another sod who might yearn and strive, but never achieve his heart’s desire.

This love for her face festers into something hateful. When Venetia’s husband dies, in debt and near ruin, Christian chalks it up to Venetia’s vanity. When she remarries a year later to an older wealthy man and is rumored to be cuckolding the man, Christian pegs her as shallow. “Evidently Christian’s beloved was a shallow, greedy, selfish woman who injured and diminished those around her.”

Despite his intense dislike of her character, he still finds her beauty unparalleled and his lust for her seems unabated.
“Almost five years had elapsed since he last saw her. The passage of time had only enhanced her beauty. She was more radiant, more magnetic, and more dangerous than ever.

A wildfire raged in his heart. It didn’t matter what kind of woman she was; it only mattered that she become his.

He turned and walked away.”

He becomes obsessed with either her or his reaction to her. I was never certain. Were his actions driven by an unacknowledged self loathing or by his shallow judgment of her? Because he hasn’t yet had her, but is still obsessed, Christian denounces beauty and does so by obliquely referencing Venetia with just enough details in a Harvard lecture that those who are well versed in society  knows that it is her.

Venetia conveniently is in the lecture hall, having brought her sister over to New England and away from a negative influence. Venetia’s unmarried sister, Helena, appears to be embroiled in an affair with a married man and Venetia and her sister in law Millie, conspire to bring the sister to the attention of the Duke in hopes that another man could spring Helena from the clutches of her improper relationship.

Sitting in the lecture hall, hearing herself being torn apart by a man she’s never met, but one she had admired from afar, was crushing. In a fit of anger, Venetia vows revenge. She will use ever guile she has ever accumulated and make Christian fall in love with her. Then she will break his heart. She does this while the two are sailing back to England from Harvard disguised as a German baroness, appearing veiled in the daytime and occluded from Christian’s gaze at night by the darkness.

The basis of their relationship is lies, vengeance and obsession. The primary problem I had was that my heart ached for Venetia and I didn’t feel that Christian was worthy of her. When Christian and Venetia carry on their veiled affair and Christian supposedly falls in love with Venetia, he falls in love with one person and it just so happens that he conveniently gets to match that one person with the one face that he’s lusted over, obsessed over for 10 years. But if you strip away the convenience, you still have Christian in love with one woman and obsessed with another. I never felt like Christian’s issues with Venetia were adequately dealt with.

After the two have supposedly fallen in love, Christian sees Venetia (not knowing she is also the Baronness he professes to love and to want to marry)

He wanted to make cast models of her. He wanted to take a set of precision calipers and measure every distance between her features. He wanted her blood and glandular fluids analyzed by the finest chemists in the world—there must be something detectibly different in her inner workings for him to respond so dramatically, as if he’d been given a drug for which science had yet to find a name.

But more than anything, he wanted to—

He yanked himself back to his senses: He was a man who had committed himself to another. The baroness might very well not reciprocate said commitment, but he expected more of himself when he gave his word.

This repeats itself. Christian can’t stop thinking of Venetia, a woman he barely knows, a woman whose actions are despicable to him; and hardly remembers the Baronness, the woman with whom he fell in love.

Christian views himself as a victim, Venetia the heartless beauty. Venetia knows her plan of revenge was wrong but somehow justified. Venetia’s great sin was to choose to punish Christian knowingly.  Christian’s careless remarks weren’t so intentionally targeted.  This is a beauty and the beast story which the Great Beauty being the beast in disguise and so in order to fall in love, the beauty has to be obscured for it, like the beast’s ugliness, informs incorrectly.

Yet, even if you can get past the misdeeds the two inflict upon each other, I could still not overcome Christian’s obsession with Venetia.  If the Baronness had not been Venetia and someone else, Christian would have still be obsessed with another woman and in that, I could not find happiness in the ending.  B-

→ Jane
Previous article: REVIEW: Her Magic Touch by Sable Hunter
Next Post: REVIEW: Coming Up for Air by Karen Foley