REVIEW: Because of You by Jessica Scott

This is the first original Loveswept title from the new and revived Loveswept line. I’ve been hearing good things about this book from it’s original purchase by Sue Grimshaw earlier this year. Knowing that you are an Iraq war vet, I knew that the authenticity of this book would not be an issue and that’s a good thing because there were a lot of eyebrow raising events in the story. 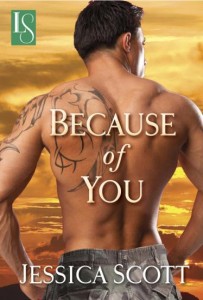 Shane Garrison is a Sergeant First Class in the Army.  At thirteen years of service, Shane is getting ready for action in the Iraq Surge and dealing with the failure of his marriage.  As a Sergeant First Class, Shane is in charge of his group of men.  He feels responsible for their well being, ensuring that every one is properly trained and equipped.  The weight of his responsibility is well conveyed and the future conflict involving his sense of responsibility is signalled clearly.  However, I wondered at the point of the Prologue.  The prologue actually just introduces Shane and given that chapter one doesn’t begin a uninterrupted timeline, I felt a bit confused.

Jen St. James, a recent breast cancer survivor, and Shane enjoy a smoldering kiss after a night out with mutual friends before Shane is deployed.  I was surprised at how emotional Shane was over their interaction.  He went from a divorce five months ago to thinking that Jen would be the reason for him to come home:

He’d hold the memory of that kiss with him even as he walked-willing and able-into a war. He’d volunteered to serve, but tonight, for the first time, he was walking away from something precious. Because of Jen, he had a reason for coming home.

The strong and devastating emotions of those in the military was well conveyed. I really felt for the women at home who missed their husbands and the soldiers abroad who weren’t provided adequate equipment to fight.  Jen’s poignant post cancer attempts to reconnect with her friends was touching as well.  I liked that Jen and Shane’s romance developed over time.  The book is very dramatic and angsty and for some it might be overly so.

Shane is beset, not just by the horrors of battle, but by incompetent officers, lack of equipment, emotional breakdowns of the soldiers around him, and his own personal pain. There was a scene with a newbie officer that reminded me a bit of Battle Los Angeles. In fact, Shane reminded me a little of the Aaron Eckhart character in that movie in that they both were Sergeants looking out for a number of soldiers whose well being and safety weighed heavily on their hearts and minds. I wished that the pacing had been more even. The book started out slowly and then had non stop drama until nearly the end.

The opposite side we have Jen who suffered breast cancer at a young age and who had a left sided mascectomy. The decision not to have reconstructive surgery was never addressed in the text of the book, although there is a lot of attention paid to the emotional trauma that Jen endures from being physically imperfect.

On top of Shane’s emotional problems suffering injuries in the war and seeing his men injured or killed, is his own lack of self esteem. His self worth was wrapped up in his soldiering and when his men came back in pieces, he was devastated. He felt guilty he was alive.  He didn’t think that he was a nice man (because as Sargeant he wasn’t supposed to be, problematically, he never see Shane being a jerk so the “he doth protest too much” entered here) and that he wasn’t good enough for Jen.  Jen spent much of her time telling Shane that he wasn’t god and that he has to let go and open up.

I was also surprised at how little attention was paid to the issue of Jen, the nurse, having a relationship with Shane, one of her patients.  In some ways, this conflict was used to humorous and touching effect such as when Jen has to remove Shane’s catheter but I did wonder at the ethics of the situation.  I understood that the point of the four chapter lead up was to make the readers believe that Shane’s feelings for Jen developed far before she nursed him back to health, but those four chapters involved so little real interaction between the two that I found it to be a shaky foundation.

There are two developing storylines in this book, both of which remain unresolved at the end.  The dual cliffhangers are meant to keep us coming back for me, but it also made the book feel a bit unfinished for me.  Given how much of the book was spent on Jen and Shane’s emotional agnst, their emotional healing seemed too quick.  The ending felt abrupt, as if I had looked away and missed something important.

The two wounded souls seeking comfort and peace will be appealing to many readers and the fast paced non stop drama adds a different flavor to this military romance.  The war scenes were highly charged and I appreciate the unflinching look at how awful it must be over in Iraq and Afghanistan. I wouldn’t have minded a few emotional respites and a less truncated ending.  B-