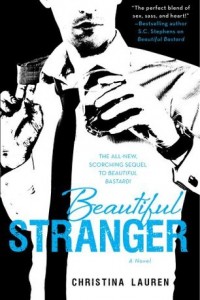 Elyssa Patrick, my twinsie in book reading, and reviewer Kati D loved Sweet Filthy Boy and both urged me to try it. I confess I was turned off by both the cover and the title and shunned the book for some time. I’d read Beautiful Bastard when it first came out and while it was entertaining, it didn’t move me to read more of the series.

But one day I was going through my old ARC pile and came across Sweet Filthy Boy and opened it up…and didn’t put it down until I’d read the last printed word. The pile of abandoned books became my pillow as I laid down to read the story of Ansel and Mia, two young people trying to make an impulsive marriage work. It was nothing like Beautiful Bastard where the couple spent most of their time hate fucking. And I even acknowledged with some reluctance that the title was apt. Ansel was a sweet filthy boy, emphasis on the sweet.

I went and bought Beautiful Stranger to discover whether the true voice of Christina Lauren was hate fucking Chloe and Bennett or sweet, confused lovers Ansel and Mia. Most of the books are more in the tone of Ansel and Mia than the Beautiful Bastard, to my relief. There’s nothing wrong with a good hatefuck, it’s just that sort of drama can be wearying whereas I can spend hours and days reading about sweet heroes who are befuddled by their newfound love feelings. Kind of like a puppy who discovers his own tail and can’t stop chasing that magnificent thing around and around.

Beautiful Stranger is a hookup story between Max Stella, a British ex-pat, who runs a venture capital business with his friend Will. He sees Sara Dillon dancing at a night club and is turned on. With her permission, he drags her onto a balcony and proceeds to stranger fuck her in the club. Sara loves this but she also believes that the one night stand is all she’s interested in. She just moved to New York City to work as a financial officer for Bennett’s family firm. And she’s put a painful relationship behind her.

For Max’s part, he’s stunned by his obsession for the petite dancer from the bar. When he discovers her identity, he convinces her to give him a chance but all Sara is interested in is a hook up. One night a week, on her terms. Max agrees. The two then explore Sara’s proclivities for voyeurism and exhibitionism. She likes the feeling of being watched, she likes the danger of being caught, and Max is happy to plan new activities whether it’s in the dusty stacks of the library or in an empty apartment building.

The one drawback in this book is that Sara’s intense need for privacy and her desire for sexual exhibitionism isn’t well explored from her point of view. Max thinks the dichotomy is endlessly fascinating but I would’ve liked to have had Sara give me some insight as to how she balanced the two. Her relationship conflict (I only like hookups) didn’t mesh with the external conflict (I like my privacy but will I get caught?!). For someone as photo shy as she was, she certainly seemed to enjoy being filmed endlessly by her hook up.

Sara seemed like a complex character but her parts were never fully explored. Max Stella was a dear, the kind of sweet, tender alpha male that I’ve always loved in my books. But to some extent, he too, was rather flat. He liked Sara. He liked sex. That seemed to be about it. But because the characters were so likeable and because the romance was sweet and because the sex was so very hot, I picked up the next book immediately. And it’s a book I’d recommend to others with caveats. B-

→ Jane
Previous article: How Do I Backup? Let me Count the Ways
Next Post: Monday News: Apple speculation builds, Kate Mosse and genre fiction, Jane the Virgin comes to US TV, and Neil Patrick Harris’s “Choose Your Own Autobiography”