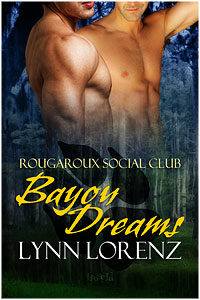 I don’t read werewolf books. I just don’t. If I see a m/m shifter book, I usually just move right along. But one line in the excerpt sold me on this book:

"Don't give me any back talk, son." She waved her spatula at him as she talked around a cigarette dangling from her lips. "You're getting old. You're the alpha. Time to take a mate, settle down, and give me a grandchild."

I just loved that extra little zing on the same old line. So I stayed up until 3am reading this book. I just couldn’t stop. And while the protracted (but necessary) ending took away a little of the Romance Novel Sigh (TM SBTB) when I shut my phone down, I still really enjoyed these two characters, even if I was aware of the flaws of the book as I was reading.

Scott is a werewolf, the alpha of his small pack in the bayou country of Louisiana, and the town sheriff. He’s 35, which is late for mating (werewolves usually mate around 30, apparently), but he’s put it off and put it off and now his need to find his One True Mate is spilling over into the rest of the pack and making them all a little nuts. His mother, a good Catholic, has cast spells for four months, trying to draw his mate to him. The problem is, she doesn’t specify the sex of the mate, so when Ted, a gay man, shows up and they both feel the instant connection, Scott–who is straight, dammit!–freaks out.

Ted is in town on a painting retreat which is really cover for his investigation of another of the painters. He’s a Private Investigator and the woman’s husband has paid Ted to figure out who she’s cheating on him with. Ted himself used to paint but he gave it up when he became a cop. But three years ago, his partner was killed when he walked in on someone robbing an convenience store. Turns out, though, that the partner was AT the convenience store to collect illegal protection money. Ted, who loved his straight partner, takes the fall to save his widow the grief of knowing her husband was actually a crooked cop, and is kicked off the force. Ted refuses to fall in love with a straight guy again, so he’s almost as freaked out as Scott.

So this story turns into a refusal of the Fated Mate Syndrome. Both men do NOT want to love each other, do NOT want to be attracted to each other. Scott thinks if his mother reverses the spells she’s set, the connection will be broken and he can go back to being straight again and Ted can go home. They fight it every step of the way, which actually gives them a little time (although not enough) to fall in love with each other. I really liked this storyline. Fated Mate stories usually make me nuts, but I loved the reversal of it here.

And the angst! OMG, the angst! “I want you, OMG why do I want you, you’re so hot, no go away, I can’t, I must, you kiss so well but leave me alone.” It was brilliantly done:

He kept walking. He didn’t want to do this. Whatever this was going to be, Scott knew it wouldn’t be good.

Scott made the cruiser when a strong hand landed on his shoulder. A shudder ripped through him, and he nearly staggered.

The other man groaned, and the grip tightened, almost bringing Scott to his knees. But not in pain. Oh hell, what he felt couldn’t be called pain at all, but damn if he’d name it.

Scott spun around, staggering a little. "You! Leave me alone." He shrugged off the guy’s hand.

"My name is Ted Canedo."

"I don’t want to know your name." Scott shook his head.

"Sure you do. You want to say it when you’re jerking off, don’t you?" He growled, his brows laced together.

"Merde. I don’t know what you’re-‘" The guy cut Scott off by stepping forward, catching his arm by the wrist and holding on. "Let me go."

"Not until you explain this." Ted stared into his eyes. Scott lost himself there, deep in those dark pools.

"I can’t. I don’t know what the fuck is happening."

"That’s a lie. I can smell it on you." Ted leaned closer and inhaled. "Shit. I can smell you in my dreams. Smell you when I touch myself."

Despite himself, Scott inhaled. Ted. His mate. The scent overpowered him, sent him reeling. His wolf howled to break free, to claim this man.

I like that both Ted and Scott were strong men, used to going out and getting what they wanted, and this translated into their actions. But every now and then they turned into guys with vaginas: “Do you know how that makes me feel?” Ted asks Scott at one point and then provides a detailed list of his emotions. And that’s fine if that’s how they’re constructed otherwise, but it’s not, so it was very jarring.

Other problems with the book:

There were a lot of extraneous characters: a homophobic cop in New Orleans at the beginning of the book who is there apparently just to show us how must NOPD hate Ted for being dirty, but that could have been done more smoothly. The painter running the workshop — Darcy Wentworth (and REALLY?! on that name? REALLY?!) is a slightly sleazy gay guy who wants to bareback another one of the painters, Peter, taking the workshop. And really, three guys at the workshop and they’re all gay? But the Darcy/Peter storyline took up WAY too much space without actually serving any purpose. There’s a random beating at the end of the novel after which everyone makes friends, which seemed odd. Ted taking the fall for his partner seemed implausible –not THAT he would do it, but HOW it would happen — especially since he didn’t KNOW his partner was crooked. Scott’s insistence he wasn’t gay bordered on the edge of homophobic. It never stepped over, because yeah, what straight dude wants to discover at 35 that his inner werewolf is actually gay, but it made me a little uncomfortable. Scott’s mother reversed the spell she did…that month. But she’d done it for four months. Why did no one mention that maybe she needed to undo all of them? And while they have time to fall in love because of their resistance, you never *quite* show it happening. There’s never something that either character does that the other one says, “I like that he does that. I like the person who would do that,” that would show them falling in love. (But I still loved that they resisted the Fated Mate Syndrome!) And the hot sex after being beaten up without even mentioning aches and pains? Sigh.

More importantly, the tone of the book was uneven. It was Angst-O-Rama, then…not, then back again. Your voice moved around a bit, and it was disconcerting at time. And finally, after Scott and Ted accept their feelings for each other, Scott has to present Ted to the pack and then subdue any challenges. And while that was very well set-up and had to happen for closure in the book, because all the tension had gone out of the relationship between Ted and Scott, it was a long let-down to the book. The emotion quit about 30 pages before the book did and while it was necessary, it’s a shame.

World building notes: Only men can be werewolves, apparently. Their mates (all women up until now) become part of the pack, but they’re all still human. And when the werewolves turn, they’re real wolves, not a wolf-man hybrid. And…when they shift, clothes are never mentioned. They don’t lose their clothes when they shift, it’s not mentioned that they’re naked when they shift back to human. It just seemed an odd thing to leave out. Finally, this is obviously the first of a series, but there wasn’t any obvious serial-bait except for one potential gay guy as a future hero, which I appreciated. Makes me thinks the books will stand on their own.

Overall, there’s too many problems with the plot, world-building, and voice for me to grade this too high, especially since I was aware of them AS I was reading, rather than in retrospect. But I LOVED the characters and loved the Angst-fest of it. The tension between “I want him but I can’t have him” on both sides was brilliantly constructed and displayed. Well done! I’m looking forward to more in the series. If readers can overlook a few gaping holes and can just read for the emotion and the hot sex, I totally recommend it.

These books show up at Amazon and other retailers about a month after their Loose Id release.