I decided to read Bear Necessities after seeing the cover for book 2 in the Halle Shifters series, Cynful, which features a truly beautiful American Indian man with long hair. It’s a striking cover, and was enough to pique my curiosity about the series. 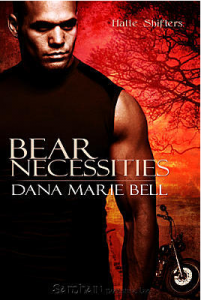 Alexander Bunsun is a grizzly bear shifter. He’s worried that something serious is going on with his cousin Chloe, who has been living in Halle, Oregon. Her family thinks she might be mated, but Bunny, as he’s called, thinks that it’s more serious than that. Chloe is in trouble, and he’s going to check in and be sure that if trouble is coming, family is there to stop it. As Bunny pulls in to Halle, he smells a sweet, compelling scent, and knows immediately that it’s his mate.

Tabitha Garwood is an Outcast wolf. She was cast from her pack at fifteen when she was accused of stealing from the local alpha, when in fact; she’d snuck in his house to make out with his oldest son, Micah. No one in her family spoke up on her behalf, so Tabby headed out on her own. She survived for eight years mostly in wolf form. But she’s come to Halle, and settled, living with her two best friends, Cyn and Glory. She’s working as an apprentice tattoo artist at Cyn’s tattoo parlor, and is hoping to live a quiet life. Unfortunately for Tabby, there is a wolf named Gary who lives nearby, he knows Tabby is an Outcast, and has been harassing her either physically or sexually for weeks now. Tabby has been doing the best she can, but she’s worried that Gary’s antics will bleed over to her friends and work.

The moment Bunny lays eyes on Tabby, he’s smitten. She has lime green hair like something out of his beloved manga novels, and she’s tall and curvy and beautiful. Given that Tabby is a shifter, she in no way fights the mating, and soon the two of them are building towards their future. That future is put in jeopardy, not just by Gary’s constant harassment, but when Chloe turns up beaten almost to death. Bunny and Tabby realize that there is a bigger menace threatening the shifters in Halle, now they just have to figure out why.

I’ll say this from the start; I’m a huge sucker for the soul mate trope. I like it even better when one member of the couple fights the soul mate pull. While Bare Necessities didn’t feature someone fighting the pull, it did feature a truly adorable hero, who was not exactly alpha, but was strong and kind and really sweet to the heroine. Tabby definitely had more issues, mostly due to her status as an Outcast. The tension between the couple was palpable, and once they consummate, the sex scenes are inventive and very hot.

I also really loved that the hero was a bear shifter, which I haven’t encountered many of in my reading of PNR. Bunny has anger issues which he solves by doing yoga, which tickled me. I found it hilarious that a Grizzly shifter named Bunny did yoga to avoid getting too angry. He’s a caregiver and spends all of his time once he meets Tabby working towards her happiness. It made him an easy hero to fall for.

What I wasn’t as excited about was the sequel baiting within the story. One of the most compelling characters in the story is Julian DuCharme, who is Tabby’s best friend. He is a Kermode bear shifter, or a Spirit Bear, and he’s almost more interesting than either Tabby or Bunny. Fortunately for me, his heroine is Cyn, Tabby’s best friend, and their story is Cynful, the second book in the series. I was almost more interested in Julian than I was in Tabby and Bunny.

Overall, Bear Necessities was a fun and sexy story with entertaining characters. I really like your voice and am looking forward to reading more from you. I’ve already got Cynful loaded on my Kindle and will be reading it very soon. Bear Necessities gets a B- from me.