GUEST REVIEW: Back to You by Jessica Scott

In the acknowledgments, you wrote that you have been working on this book since 2008. I can certainly see how this would be a challenging story to get right and while it’s not perfect, I am glad that you persevered. Before I go further, I have to admit that the US military is an organization and culture that is completely unfamiliar to me. When I read military romances, I sometimes wonder about the authenticity and accuracy, but because you are a career officer, I know I can trust you to get it right. That is definitely a plus. 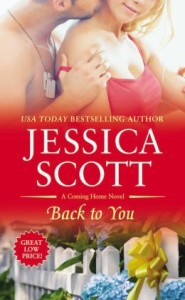 Laura and Trent Davila have been married for more than a decade and have two children, but Trent has been absent for much of the marriage: as an army captain, he has been deployed several times, and although he told Laura that there was no choice about it, she eventually found out that this was not true, and that Trent had actually volunteered to go several times. Feeling that Trent has bailed out on their marriage and unable to trust him, Laura files for divorce.

Around the same time that Laura filed for divorce, an investigation revealed that an officer under Trent’s command had been stealing and selling sensitive items, and the officer implicates Trent in these activities. As a result, Trent is fired from his command and returns to the US to await the conclusion of the investigation and a possible court martial. On top of that, a female soldier has accused Trent of improper advances, which is both damaging to his case and very hurtful for Laura.

Back to You is set about a year after these events, in 2008. Trent has not signed the divorce papers, and realizes that his choices have wrecked his marriage. He returns to Fort Hood, where a hearing is scheduled to take place soon and decide whether his case will go to a court martial. Laura, who works on base as a family readiness liaison for the brigade, still loves Trent, but feels that their marriage is over and wants to move on. Nonetheless, when his lawyer suggests that the two pretend that their marriage is going well as a way to undermine some of the charges, Laura agrees to go along with it, although she makes it clear that she does not believe that they can salvage their marriage. I didn’t really think that the pretend-marriage was needed for the story to work (or a particularly effective legal strategy), but I went along with it.

Laura had been willing to make a lot of sacrifices as an army wife, but finding out about the voluntary deployments and the allegations against Trent crushed her, and she’s afraid of letting him back into her life. Trent is scared because he doesn’t know how to cope with civilian life, including his family, and his way of dealing with it has been to stay away – physically while on deployment and emotionally while home. But this time, he knows that if he wants to fix his relationship with Laura and be a father to his children, he will have to face his problems and somehow find a new normal.

In many romance novels, when heroes carry the sort of emotional baggage that Trent has, it’s resolved with a quick conversation or a cathartic confession. I liked that you chose otherwise and showed Trent’s incremental progress in this regard: learning to ask for help, to share his experiences with others and to rely on them doesn’t come naturally for him and there is no miraculous fix – it’s something he has to work on with Laura, with his psychiatrist and with himself. He has to learn how to be a father and how to really be there in his relationship with Laura.

What didn’t work as well for me was the way Laura and Trent’s reconciliation was portrayed. They both spend a lot of time thinking about their past, what had gone wrong, and their worries about the future – but not a lot happens between them in the present. It was past the 10% point when they saw each other again for the first time, and even after that, there would be long stretches in which there wasn’t much interaction between them. When they did get together, there would often be some major development in terms of their relationship or Trent’s relationship with the kids. Sometimes it just seemed like it was too much and too fast. I wish there had been more Laura and Trent together, rather than Laura or Trent thinking about being together, and I think that might have helped with the pacing and the emotional impact of the story.

The case against Trent isn’t very strong, but the lieutenant who implicated him has a high-ranking and well-connected father so it isn’t something that can just be dismissed. It’s probably for the best that the lieutenant doesn’t make too many appearances, since he’s pretty much a one-note villain with no redeeming characteristics. But the outcome of the investigation and Trent’s consequent choices about his life were believable, and I felt that by the end, Laura and Trent were headed in the right direction. B-.