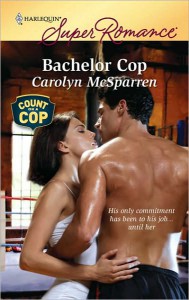 One negative aspect of having titles like the one that is given to your book is that it diminishes the content of the story Bachelor Cop is actually fairly intense emotional story but the title suggests something far more flippant. Perhaps that works in both positive and negative ways. Positive because the reader who believe she does not like the more serious books may pick up this story and enjoy it regardless of her original expectations but negative in that readers who are looking for something more meaty might pass this over.

Randy Railsback is the titular character. He has a reputation for being a womanizer and has no desire to settle down. In addition to his peacekeeping duties, he also runs a self-defense clinic for women. One in his new trainees is English professor, Helen Norcross. Helen is a divorced single mother who suffered a horrible rape and assault. The serial rapist who attacked Helen targets professional women; and sometimes, but not always, will return to the victim and kill her.

Helen is having a hard time recovering from her attack and attending the self-defense course is part of her goal to protect herself and her family from the criminal. Helen presents an interesting character because she is struck by panic attacks and is prone to having a number management issues. She’s not a very typical romance heroine and I really appreciated the diversity of character presented here.

In order for Helen to protect yourself however she really needs to control her rage. I did not feel as if the story suggested that women should not be angry or that Helen was not justified in her rage. Instead it was presented that Helen’s behavior from time to time would actually endanger herself because the anger would overcome her ability to fight back in a particular situation. Other readers assessment of this may be very different.

Randy is attracted to Helen, a little against his will. He ordinarily goes for the women who are into the same type of no strings physical enjoyment attachment versus the type of women like Helen who could barely stand next to him but there is something about Helen that really draws Randy. He exerts himself to get to know Helen, meet her daughter, and learn about how smart she is.

The the sex scenes were handled well. Helen is still in the recovery stage and she attempts to use Randy to test her resiliency when it comes to the opposite sex. This place is Randy in a very unique and uncomfortable situation, one that he has not been in before. His momentary outrage at being the test subject provides a little of it to a given his background with women. Randy’s transformation from tom cat to domesticated lap cat provides the humor in the story:

Randy was worn-out. All this celibacy and extra exercise was sapping his energy instead of giving him more. He ought to feel pumped, ready to hit the clubs down on Beale Street, have a margarita or two, check out the ladies.

Instead he went home. As he watched a basketball game on ESPN, he said, "Before long I'll adopt a cat."

Whether Helen’s recovery is believable will depend upon the reader. This story takes place over a fairly short period of time, maybe a few weeks, although it has been two years since Helen’s abduction and rape. I chose to accept that she had recovered because I felt that Helen’s greatest emotional challenge at the start of the story was overcoming her fear and anger rather than the shame of the attack itself. And it’s never suggested that she has to let go of her anger only that it’s dangerous to allow the anger to control her.

The story is very dialogue heavy and at times I felt that the dialogue was almost too mundane to be shared with the reader. Further, the emphasis on dialogue and lack of internal introspection could have contributed to my uncertainty over Helen’s recovery. As I said previously I accepted that she was because I was told that she was but in truth, I didn’t spend as much time in Helen’s head as I would have liked. B-

This book can be purchased at Amazon, Kindle, eharlequin, ebook Harlequin, or other etailers.