REVIEW: Bachelor at Her Bidding by Kate Hardy 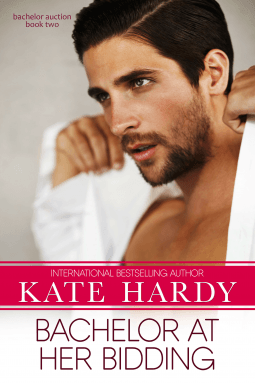 Your date with Parisian-trained chef Ryan Henderson promises you’ll get the best meal of your life cooked especially for you. His Red Velvet cheesecake is to die for – but we know he has even better desserts up his sleeve…

How to win a girl in ten cakes…

When Dr. Rachel Cassidy comes back to Marietta with a broken heart and a divorce under her belt, going to a Bachelor Auction fund-raiser doesn’t sound like her idea of a good time – and when her sister and friends “buy” her a dinner date with sexy Parisian-trained pastry chef Ryan Henderson, that sounds even worse.

Ryan doesn’t have time for dating – he’s put his dreams to one side and come back to Marietta to look after his sick grandmother. But when he agrees to help a charity fundraiser by offering to cook a special meal to one lucky bidder, he gets more than he bargains for and discovers a woman he might just dare to let himself fall in love with.

Then tragedy strikes, just when Rachel and Ryan think they might have a future, opening up old scars and pushing them apart.

And if they’re to stand a chance of getting back together, then Ryan’s going to have to be seriously inventive. Can he win the love of his life with ten cakes?

So I started with the last book in this series and am now reading my way back. Having read some other books about Parisian trained chefs and interested to see which cakes Ryan would bake, I decided to start here.

The premise of the whole series is quickly outlined at the start: a small town is coming together to help one of their own. The main money event will be an auction of bachelors who will each supply an incentive for bidders. Ryan’s will be an offer to cook a gourmet meal for the winner. Rachel’s friends band together and bid on him for her – ostensibly as a birthday present but the “not so veiled” reason is to help her get back in the dating pool after her painful divorce.

Rachel isn’t the only one with a relationship past. Ryan was all set to open what he hoped would eventually be a Michelin starred restaurant with his girlfriend when family issues called him home and she split in a nasty huff.

So two wounded people who are not looking for love, but boy do their hormones zing and sing around each other. Still they must frequently remind themselves and others that they are not, NOT I tell you, looking for any kind of relationship due to their past hurt hearts. Never mind the naked coffee drinking after the orgasm, they’re not looking for relationships.

A Parisian trained chef cooking dinner and desserts? Oh, yeah, bring it. And he makes macarons! I’ve been in love with macarons ever since a friend introduced me to them. Their protestations about no sex!, no relationship! this is just cooking! soon go up in flames. The road to the bedroom and blistering sexual pleasure is paved with good intentions, right? Ryan is a sweetie and Rachel is darling. As for the croquembouche – the cake with intent, per Rachel’s friends – all I can say is yum.

With a little help and a lot of hints from their friends + one snarky character who needed a public demonstration – which brought out the whistles from other customers – of the fact the Ryan thinks Rachel is desirable, the no strings fling is on. Funny how flirty they both suddenly get then. . . but these two talk way too much during the initial sexy time. I do like that once the dating has started, they actually sometimes talk in addition to sex and about things which mean something to them thus getting to know the real person.

Unfortunately, the often repeated painful past relationship issues of both characters eventually elbow their way into the story. Ryan kicks off the trip down Big Mis Lane but Rachel quickly joins in and both are soon recycling old hurts and regifting them.

After he acts like such a snot, Ryan does think about things and changes his mind on his own then comes through with a very public apology. I do admire his decision to go with his specialty and woo Rachel with decadent cakes – complete with tasting notes. They are a labor of love and something only he could make her. Of course she changes her mind though the turnabout to an engagement was awfully fast for how much she says he hurt her.

This is a nice small town romance with people who might be all in your business but they care and neither Rachel nor Ryan loathed the thought of moving back and living there. Of course sometimes there’s a need to drive to the big city to get gossip-aboutable things such as condoms, though. Then the upside of living where everybody not only knows your name but your business is that they’re happy to help out in giving Rachel and Ryan time to fling – and talk. The standard Big Mis was a disappointment but overall this gets a B- from me.