I’ve enjoyed your Harlequin Intrigue Romantic Suspense books for years, I thought your recent Cosmo Red-Hot Read was great fun, and one of your contemporaries for Carina landed on my Best of 2013 list.  So when I saw your first release in a new series for Samhain I requested it sight unseen. This is always a somewhat dangerous proposition, and here the characteristics I’ve come to depend on were mixed with character traits and story twists that I found quite off-putting. My reading experience was divided between my usual feeling that I was in very good hands and “oh no, they did not just go there.” I’ll pick up the next one, because a HelenKay Dimon contemporary is basically an autobuy for me, but I might be peeking through my fingers as I read, at least in the beginning. 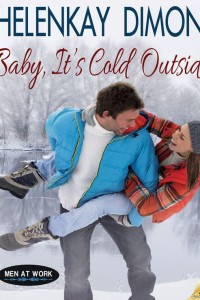 Baby, It’s Cold Outside is the first in the Men At Work series, and the series title is a good indicator of the book’s relatively equal presentation of the hero and the heroine. This is probably a good thing, because the hero does something almost unforgivable to set up the main story and conflict, and if I hadn’t seen things from his POV I would have had a very hard time thinking he deserved the heroine. As it was, it was still touch and go.

No one writing romance today can open a book like Dimon. No one. The story begins when construction company owner Lincoln Campbell and his personal assistant, Thea Marshall throw caution and HR rules to the wind and act on long-suppressed desires when they start a passionate encounter in Linc’s office and end it the next morning in his condo. Both think this might be the beginning of something more, but on returning to the office Linc is confronted with detailed and apparently irrefutable evidence that Thea has been selling company secrets to a competitor who is using the information to undercut them in a bidding competition for a major commercial project. He immediately has her fired for cause and escorted from the building, all without directly telling her the reason. After all, she did it and she’ll probably deny it, so she must know, right?

Thea is devastated in every possible way. She loves her job, she has been attracted to Linc for months, and she’s just building up her life after the loss of her parents in a plane crash. She has support from two work colleagues who have become her friends, Becky the office manager and Tim the computer guy, and that helps, but mostly she’s torn between desolation and anger, the latter quite justifiably aimed at Linc.

For his part, Linc can’t stop thinking about her, even though he has the evidence convicting her sitting on his desk. After trying and failing to move on, he hires a second investigator to look into Thea’s situation more closely (the first investigation was to discover the source of the leak and led to Thea but didn’t start with her). After a few weeks, he decides he has to see Thea again (whether she’s guilty or not) and pursues her to where she’s taken refuge to sort out her future, her family cabin in upstate New York.

Linc’s character has to tread a fine line between acting like a jackass and being an irredeemable jackass, and he more or less stays on the right side, thanks to Dimon’s ability to write believable, sympathetic men. But he was on serious probation for me the entire story and even his honorable behavior in the second half didn’t quite make up for it. The fact that they did have strong feelings for each other, feelings that weren’t just about lust, helped a lot as did the fact that they didn’t move from insta-lust to insta-love. Thea knows how Linc thinks and she uses that to keep from being snowed by his charm:

“Nu-uh.” No way was she falling for the quick drop of a pseudo-apology.

She’d been Linc’s assistant for long enough to figure out he’d assessed her mood and decided a quick admission would work best to pacify her. He was rock stupid when it came to women, but off-the-charts smart when it came to business and strategies. Thanks to the lessons he’d taught her, this time she would be smarter.

“Me, this, is a challenge of some sort for you. Well, you forget how many meetings I sat in on. How many calls I listened to.” He played a good game. He could schmooze and convince expert businessman they believed one thing when they came in believing another. Now he’d turned those tactics on her. She wasn’t buying it.

Unfortunately, while Thea makes Linc take responsibility for what he did to her, the way this unfolds makes Linc the harmed one because of his childhood and family history. It made him more sympathetic, but it also shifted the emphasis to his pain rather than hers. This isn’t an uncommon strategy, but I hate the way it turns the wronged person (usually the woman) into the one doing the comforting.

The second big problem I had with the story was the revelation of the real company mole. It made sense within context, but I hated that it turned out to be who it was. I can’t say more without completely spoiling the book, but it relies on a motivation that I want to go away forever. It made me angry, and sad.

Finally, there is a standard romance-novel twist that many readers don’t like, especially in contemporaries. I thought it worked fine here and it reminded me of one of my favorite older contemporaries, Banish Misfortune by Anne Stuart (both the twist and the confrontation/reunion in small-town New York). No one does anything stupid to get into the situation or to deal with it and no information is withheld. It’s about as realistic as you can make this setup in a contemporary and it gives a richer dimension to Thea and Linc’s conversations when they meet up again. But if you hate this sort of thing on principle the book might not work for you as a result.

Overall, this is a hard book for me to grade. The characters are written well and the various relatinships are well developed, especially given the novella length, which compresses important events and character arcs. I love the way Dimon’s characters talk to each other and most act like adults, even when they start out badly. No one behaves in unbelievable ways and most story elements are well motivated. But I was left with a nagging feeling that Linc needed to grovel a lot more, or preferably undergo serious therapy, before he was deserving of a relationship with Thea, and I really wish the company-sabotage plot had ended differently. Grade: B-

→ Sunita
Previous article: REVIEW: Down on Her Knees by Christine Bell
Next Post: REVIEW: I Have a Bad Feeling About This by Jeff Strand