“After a frantic call, Sloan McKinley travels to the heart of the Alaskan wilderness to be there for her best friend, who’s just inherited property in the small town of Indigo. The last thing she expects is to be lured by the town’s matriarchs into their annual contest to get their grandsons married off.

But Sloan can’t deny the appeal of the rugged local men-Walker Montgomery in particular. Soon she finds herself falling in love with the wild outdoors…and with one of Indigo’s most beloved residents. There’s just one question that remains: is the town’s most confirmed bachelor ready to get caught?” 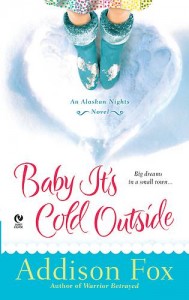 I’m never sure what arcs Jane is going to send me but in one of the latest batches, she tucked a copy of your new contemporary, “Baby It’s Cold Outside.” Not having ever tried any of your books before, I thought, “what the heck.” The blurb sounded like it could be cute so I dove in.

The book starts off well and gives a succinct background to Sloan and why she might not only go along with the bachelor stuff but be more ready than Walker in admitting to her feelings and going for what she wants. Then…

it’s off to Alaska and the feeling that I’m missing something. Grier and her story storta get started then dropped for much of the book with only an occasional return to it to remind us since by now we’ve almost forgotten it. I suppose since this appears to be a series that more time will be spent fleshing out Grier’s past and issues with her father but for right now as this book ends, I’m still truly confused. Since this is only sprinkled on top of Sloan + Walker’s book, I can – and will – ignore most of it for now.

The whole bachelorette thing could have taken over this story and made it silly. After all, the idea is kind of sexist especially since there are so many more men than women in this area so why should the women even be competing? Seems like the men should be proving their worth. Anyway, I’m glad that outside of lighthearted trash talking between the men and women this aspect was left for last and quickly over. I did kind of expect some more time to be spent on the bachelor auction as this sort of thing is usually good for a laugh but even this got skimmed over. Hmmmm

Sloan impresses me. She’s smart, witty, good natured, willing to have some fun after letting her hair down and she lets go of her preconceptions about Alaska and admits she shouldn’t have them. She seems like the type who’d be a great travel companion. She’s also a great friend to Grier and new found friend to Avery and sometimes that involves telling a girlfriend what she doesn’t want to hear. And those two need a lot of telling. I like that Sloan is willing to dig deep into herself and take the chance on telling Walker what she feels and wants. She’s the one with the balls about it. And she also gets off a great story about the whole adventure and learns from everyone then makes use of her new self knowledge. But then what the fuck happens after Walker announces his little “this is my background that precludes me from ever falling in love for good” and Sloan seems to throw all her principles about how she deserves more from a man out into the snow for a few nights of sex? This part disappointed me as it seems like falling into standard “pad the middle of the book and extend the word count because they can’t both fall in love just yet.”

Meanwhile Walker can be a putz. A handsome putz and putz who’s a good lawyer but Lord the man does need a 2×4 lumber whack to the head. Sloan doesn’t mock him when she finds out the reason he’s so against forevah, she sees and feels his pain, but then she is the one to point out that he isn’t his father, he’s grown and he can make choices if only he’s got the nerve and strength to try. As the page count wound down, I wondered if Walker wasn’t going to pull the rug out from under their romance once too often but the grovel scene, where he announces to the world what a fuckwit he’s been then goes about fixing that, is worth most of the price of admission. But man is he a fuckwit for a long time then, after a brief moment of epiphany where he pulls his head out, he plunges back into fuckwittery til the end.

I get the impression you either already love Alaska or have fallen in love with your research about it. It’s not only Small Town Life Rulez but snowy, extremely cold Alaska life Rulez. Okay, it does look like a bee-yut-eful place but for everyone to fall madly in love with life here in such a short space? In winter? Really? Which leads me to another issue which is one brought up here in a recent Open Thread for Readers. The story starts in late November, goes on for 2 weeks and it’s like mushing the romance to the finish line. Wedding bells haven’t rung yet on the New Years Eve that wraps up the book but let me catch my breath from the speed that a lot of today’s romance books seem to share.

“Baby It’s Cold Outside” starts off very nicely but gets bogged down a touch by the middle before finding its way again for the end. I was disappointed that Sloan gets temporarily turned into a character who – out of the blue and for little reason we’ve seen so far – suddenly realizes! “I’m in lurve. Let’s have a few nights of hot sex.” And that Walker switches into putz-mode when the plot calls for it. I’m not ready to move to Alaska yet but could be persuaded to continue with the series to see where you’ll take the plot threads next. B-