REVIEW: As You Wish by Elyssa Patrick

You and I have always been friendly on Twitter, and I knew that you were an aspiring author, so when you offered me an opportunity to read your self-published book, As You Wish, I jumped at the chance. The book is a series length book, that has a charming locale, entertaining characters and a sweet, satisfying romance. 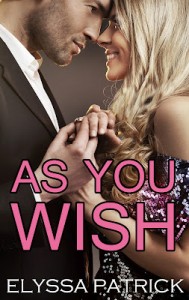 Aubry Riley is one of the world’s biggest pop stars. Famous for his fantastic good looks, his incredible musical talent, and his former wild ways, he’s come to Vermont to try to escape his crazy life in California, and to reconnect with his six year old daughter, Roxie. Aubry is a recovering addict who went off the deep end when his wife, Zoe, died suddenly. Now, Aubry needs to make a come-back, not just in the music industry, but with his family and the daughter who he’s never been a very good father to.

As he’s driving to the lake house where his family is staying, he passes an old car broken down on the side of the road. The car belongs to Portia Jackson. Portia is dumbfounded to find a seriously cranky Aubry Riley rescuing her from her broken down car and the raging blizzard. Aubry offers to give Portia a ride to the nearest gas station (which is 50 miles away). On the way, he finds that Portia is talkative and vibrant. She’s funny and seriously attractive. Of course, Portia thinks there’s not a remote possibility of Aubry finding her pretty or even being interested in a normal woman like her. But when she impulsively kisses him, and he responds by showing her a “real” kiss, and giving her his cell phone number, she decides it’s time to take a chance on a fling.

In the mean time, Aubry is dealing with guilt over his lack of attention to his daughter due to grief and addiction, and trying to better his relationship with his younger sister, Caroline. Aubry spent most of his childhood protecting his sister from their abusive father, and took her with him when he escaped their childhood home. But in the years after Zoe’s death, Aubry spiraled into addiction and hurt those closest to him, particularly his sister and his daughter. He’s become quite the grouch, and is not easy to be around. Plus, he has been suffering from writer’s block, and now his record company has no intention of offering him a new deal without hearing new music from him. But his attraction to Portia and reconnecting with his child is sparking new music within Aubry. Portia has her own issues. Her floral shop, Cloud Nine, is about to go under because of the recession. She’s on the brink of losing everything. Even as her personal life with Aubry is looking up, she’s struggling to pay her bills.

There is so much to like about this book. You have a truly lovely writing voice, and both Aubry and Portia are easy to pull for. Aubry has suffered loss after loss, which accounts for his surly attitude. Portia has a sunny personality, but has a ton of stress in her life. Despite several obstacles, it’s very easy to root for this couple’s happy ending. I appreciated that they didn’t just hop into the sack, but had several steamy and tension filled encounters before they finally consummated their relationship. Once the couple did have sex, the scenes were well written and enjoyable. Their relationship unfolds slowly and believably, with a few bumps along the way. It’s a satisfying journey, for sure.

As for issues with the book, I think perhaps the story had too much going on, which left me feeling slightly unfulfilled. Aubry has SO much baggage, that the resolution between him and his sister, as well as the reconnection with his daughter felt short changed. I’d have liked to have explored their past and had the resolution be more a focus of the story. Roxie, Aubry’s daughter, was important to the plot, but also had a whiff of plot-moppet to her. Again, their relationship felt almost incidental to Aubry’s development as a character, despite the fact that it’s mentioned many times. My final note is that Aubry had been mourning his wife for years, but fell in love with Portia very quickly, and more than that, realized it was love. I’d have liked to have seen more tension there. None of these issues felt insurmountable to me, but stemmed from a desire read MORE about a character who I found to be intriguing.

Overall though, this is a really lovely story with plenty of entertaining characters, a strong sense of place, and a touching ending. I really enjoyed your book and am looking forward to reading more from you. If you love a series style book and are looking for a sweet romance, As You Wish is for you. B-.