Are angels the new vampires in romance novels? It seems like the number of books starring angels continues to expand exponentially. When choosing to write about angels (or winged beings, in the case of the Guardians), authors invite introspection from readers about the nature of good and evil and the balance of power. 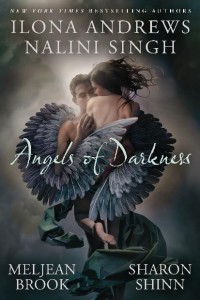 Vampires are predators and humans their prey. When pairing a vampire and human in a romance the power imbalance that writes must address is one of prey and predator. With angels the power imbalance is fundamentally different. Angels inspire awe but their otherness isn’t necessarily predatory so much as inhuman and powerful. An angel-human relationship isn’t about resolving the prey-predator dynamic but rather about protector and powerless. Angels are a like Knight-protectors (though without the horse and armor) and they are often portrayed as protectors of humanity (think guardian angel, the arch angel protector of women and children, etc.). How does this affect how we approach books starring these mysterious not-human beings?

These were the thoughts swirling in my head as I picked up the ARC of Angels of Darkness. I had read books and short stories by Ilona Andrews, Meljean Brook, and Nalini Singh; Sharon Shinn was a new-to-me writer.

The anthology opens with Nalini Singh’s story, Angel’s Wolf set the world of Raphael and Elena where all-powerful angels rule the world, create vampires to serve them, and humans live their brief lives much like we do. The angel Nimra serves Raphael and oversees New Orleans and its environs. Noel, a vampire recently healed from vicious attack that left him as little more than pulped flesh, is sent by Raphael to work for her. In Singh’s world angels are cold, uncanny beings of power beyond the comprehension of most humans.

Nimra is the most interesting angel I’ve encountered in Singh’s world. She has a horrific power that can take the violence and badness inside of a person and morph it into that individual’s own suffering and anguish. The meaner you are, the more Nimra can hurt you, which means the most powerful angels—all of whom commit acts of violence, have the most to fear from her. But Nimra herself isn’t mean-spirited or vengeful. Underneath her powerful crust she has a deep compassion which is seen through her love of her pet cats and her affection for her elderly human steward, Fen.

Throughout the story Nimra and Noel are on opposite trajectories. Nimra is slowly revealed to the reader as kinder and more compassionate than her merciless reputation and Noel is revealed as more powerful and capable than his broken victim status. They arrive at an equilibrium where Nimra remains the feared ruler of this territory and Noel rises to become her fear-inducing enforcer.

Ilona Andrews’ story, Alphas: Origins is set in the world of the Alphas. This was my first foray into this world that feels post-apocalyptic though it’s not. This is an alien story. Or more accurately, we are all subspecies created by aliens and left to battle until only one remains. At least I think that’s what going on. Most of the story is set in a parallel dimension that has portals into our dimension. I read this Alphas slowly and closely because the world is very complex and I kept trying sort out if I’d missed something. A lot of the time I did not understand what was going on. I was at least as clue-less as the heroine and this confusion created an empathy with her character. (Since finishing the story I’ve wondered if this was a deliberate construct by Ms. Andrews.)

So here’s what I think I know about the story: there is a battle between two factions of mixed subspecies. The “good” side—the one with our hero and heroine—are fighting to get to another dimension in their world while the other faction is trying to kill them. Some beings have more power than others, and fighting, pain, and death are commonplace.

I wouldn’t really call this story a romance. The “hero”, Lucas, is a shifter who turns into a fur covered monster that needs to drink Karina’s blood. Karina is a human who has some genetic link to the original subspecies making her blood food to fuel the hero

I find Ms. Andrews’ world building intriguing, but this such a complex world to introduce in a short story and I became focused on trying to piece together the world-building which distracted me from the character development. The romance, such as it is between Lucas and Katrina isn’t very romantic. They come together out of mutual need—he for her blood, she for her life—and an emotional bond begins to develop. But it the bond stems from the Katrina’s lack of other options—did I mention the leader of Lucas’ faction is holding Katrina’s daughter hostage? I would like to read more about this Alpha world, but as a stand-alone story this one was a tough read.

I should add that when I first saw this anthology was coming and that it was about angels, I hoped that Ms. Andrews was going to write a story about Thanatos, the angel in the Kate Daniels series. I was a disappointed when I found out this wasn’t a story about him and this may have contributed to my dissatisfaction with this story—I wanted one thing and got another.

Sharon Shinn’s story, Nocturne, is set in the world of the Samaria series. This is a story of redemption, forgiveness and hope. Moriah has been running from events in her past and the angel Corban is mired in depression and refuses to face his future after an accident blinded him.

Moriah is abrasive and canny, hardened by a tough life and hiding from events in her past. It’s her skeptical attitude and lack of awe for angels that are what Corban needs to shake off the mantel of depression and hopelessness that cling to him two years after his accident. In each other they each find their paths to redemption and the hope for a happy future.

This story is told in the first person and it took me a while to begin to appreciate Moriah; during the first half of Nocturne I had to force myself to keep reading. Shinn peaked my curiosity about the monster (Corban) in the forbidden house, but that was the only thing that kept me reading. I wonder if readers of the Samaria series will feel differently. Would knowing this world have made the story more compelling to me from the start? I’m glad I finished it, but I don’t know if I’ll seek out the other Samaria books.

Meljean Brook’s story, Ascension, is set in her Guardian world. Marc is a Guardian trying to identify and remove a demon who is spreading malice and discontent in his territory. Radha a fellow Guardian and Marc’s former lover, has arrived under the pretense of taking a vacation and offers to help Marc in his search.

I think Ms. Brook is a particularly fine short story writer. She deftly delivers subtle character development and emotional arc while weaving the investigative elements that reveal, layer by layer, information about the town and its inhabitants. The evil in this story was sown by a demon, but it was enacted by humans. I found the happy ending to the romance was more poignant after learning the identity of the murderer. The years lost between Marc and Radha as they each battled their inner demons were reflected in the choices of the murder. All of them made choices that led to unhappiness. Marc and Radha got a chance at redemption (and love) all these years later. Who knows, maybe the murder will receive the same, in time.

Each story in this anthology complicated my ideas about angels and reinforced my belief that good and evil are on a continuum with no clear lines demarking where you are on that continuum. As philosophical ideas I found each story offered something compelling; as entertainment I found the stories uneven and on that basis I give the collection a B-.