I’ve become rather selective when it comes to urban fantasy, even in the young adult genre. It’s just that there’s so much of it these days that if I don’t, I’d end up buried under a pile of books until well into the next decade. I’m also a little lukewarm on angels. Even after being introduced to Caris Roane’s brand of crack. I know angels were one of those trends people used to tout as “the next vampire,” but they never caught my interest. But despite these things, I decided to give your book a try and I’m glad I did. 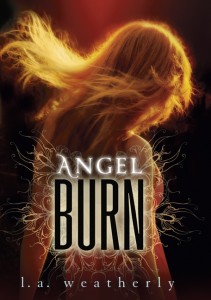 Willow is her high school’s resident social outcast, but there are actual legitimate reasons for this. She lives with her aunt because her mother is mentally ill and unable to care for her. In fact, Willow has been practically looking after her mother for as long as she can remember. Her father’s been a nonexistent presence in her life and according to her aunt, is the cause of her mother’s current mental state. She also gives psychic readings. I find this aspect of her character fascinating because it both ostracizes her from her peers (who label her a freak because of it) but also makes her an object of interest because those same peers who scorn her have no problems coming to her on the down low for a look into their futures.

And it’s one of these readings that sends Willow’s life into chaos. When she gives a fellow classmate a reading, she discovers that angels are real. However, Willow senses something is terribly wrong with this angel and wonders what exactly he’s doing to her classmate. Even worse, she inadvertently reveals her existence to the angels. This is bad because Willow is the key to their destruction.

In the world of Angel Burn, angels are not kind, benevolent beings. They want you to think that but in reality, angels are parasites. The dimension from which they come from has begun to collapse, which means they need to find a new home, one with an energy source to nourish them. In their home dimension, that energy source was ether. On Earth, that energy source is humans. To make matters worse, humans find the euphoria resulting from an angel’s feeding addictive and want nothing more than to experience that sensation again. This persistent desire to commune with angels usually leads to their own demise as prolonged contact results in any number of ailments and disease.

For the most part, this was a refreshing change from other paranormal YAs. While there was a romantic plot, it was balanced by an action thriller plot. After Willow’s existence is discovered, an angel assassin named Alex is sent to kill her but they team up when they realize that her hybrid nature might be the key to saving humanity from the angelic threat.

In many ways, this is a road trip story and I’m fond of those kinds of narratives. Willow and Alex don’t particularly trust each other — Alex was sent to kill her and Willow is the result of everything he hates — but they have no choice but to rely on one another. I enjoy that kind of tension, with or without the added layer of physical attraction. (That is present here, of course.)

Both Willow and Alex are independent, self-reliant people but this doesn’t necessarily translate into their being loners with no networks or friends. Willow has her mother and aunt, as well as her best friend. Alex has his fellow angel killers. They were both separated from them due to circumstances beyond their control, but the forced break doesn’t mean they forget about them. Willow constantly worries about her mother and fears for her best friend, who doesn’t believe the lie concocted to explain her disappearance. When the chips are down, Alex falls back onto his old connections. These reactions are normal and believable to me, and I’m glad they were presented here.

The one thing I didn’t care for was that stretch in the second half of the book where Willow and Alex holed up in the cabin and didn’t do anything. I understand that was part of the romantic plot but the majority of the book spends its time telling the reader that angels are bad, angels will destroy humanity simply because we’re viewed as food, and angels are coming to invade our dimension. While it’s believable that people would get overwhelmed and want to run away from their destiny, I had a hard time believing Willow and Alex would drop everything and do exactly this based on what we’d seen of them beforehand.

I also thought the identity of Willow’s father was so obvious. Talk about cliche. Why does the protagonist always have to be [spoiler effect=”blind”]the child of the big bad[/spoiler]?

Part of me wonders if this book was originally intended to be a standalone but had to be altered in order to fit the (now-traditional and almost-expected) trilogy structure. I felt like the climax and resolution was choppy and an obvious set-up for future books. That said, I thought the ending was refreshing because for once, not everything goes the protagonist’s way.

While I doubt I’ll ever be enamoured of angels, I am interested in seeing what’s next for Willow and Alex. Not so much the development of Willow and her father because I feel like I’ve seen that storyline a million times before, but to see how the war between humanity and angels plays out. B-