REVIEW: An Ember in the Ashes by Sabaa Tahir 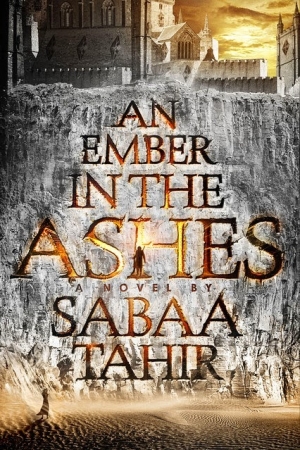 It’s been a while since I’ve seen a book with this much buzz and advanced publicity. There have been lots of comparisons already. Hunger Games and Game of Thrones pop up a lot. I do find comparisons useful — I sometimes use them in my own reviews — but only up to point. Considering how often “the next Hunger Games” or “Game of Thrones for YA” get tossed around as labels, those specific comparisons have lost all meaning for me. But if I were to compare your debut to something, it’d actually be Gladiator.

An Ember in the Ashes tells the intertwining story of two characters: Laia and Elias. Laia comes from people who were once renowned scholars. Unfortunately, their kingdom was crushed and taken over by the current ruling empire. Those who remain of the scholar people now live as oppressed citizens under imperial rule.

But one night, military officials visit Laia’s family and arrest her beloved brother for conspiring with rebels. It doesn’t go well. Her grandparents are killed, her brother’s taken away, and Laia barely escapes with her life. Left with no recourse, she seeks out the same rebels her brother was accused of working for. Laia strikes a deal — in exchange for infiltrating a military school as their spy, the rebellion will rescue her brother.

Elias comes from an elite warrior-noble house. He has trained since childhood to be a imperial soldier and is widely considered to be one of the finest their school has ever seen. But Elias has a secret: he has no intention of becoming one of them. Immediately after graduation, he plans to desert, a crime punishable by death. But fate conspires against him and Elias finds himself unable to leave the military school. And, of course, this puts him on a collision course with Laia, who has infiltrated his mother’s household.

When the first chapter was revealed a few months ago, a lot of people pointed out the dystopian feel of the sample. I get why they had that impression, but I personally didn’t agree. An Ember in the Ashes is a fantasy, and one of the staples of the genre is the evil empire that must be overthrown. This novel fits that to a T. It doesn’t proceed in the way you’d expect, if you’re familiar with that trope, but it recognizably belongs to the category,

Story-wise, I really liked the way the plotlines intersected. From an analytical point of view, I admire the way the story was put together. All the pieces fit and unfold in a beautiful, and unrelenting, way. Laia and Elias are people constrained by their circumstances and trying their hardest to achieve desperate goals. I personally thought their choices made sense in context. No one did something stupid for the sake of plot advancement.

On the other hand, I have a couple reservations. As I said, Laia’s choices made sense in context. She wasn’t trained as a spy. She wasn’t part of the rebellion. In fact, she tried to avoid them because joining them meant death. So it was perfectly believable for her to be timid and overly cautious in the Commandant’s household, especially since all previous spies were discovered and killed in horrible ways.

But too much caution is not interesting to read about. I can’t believe I’m about to say this, considering how much I prize clever characters, but I would have liked to see a more recklessness from Laia. Yes, what she’s doing is dangerous. But she’s trying to save her brother, and I wish that desire would have trumped her cowardice earlier on.

The romance between Laia and Elias is an odd one for me to discuss. It’s instalove (or instalust) but goes to great lengths to show us why it’s not a case of instalove. However, these attempts would have been more effective had the scenes between Laia and Elias not confirmed how much it actually is just instalove. I didn’t buy their connection at all. That said, I will readily admit part of my disbelief stems from the fact that their relationship found its start as one between someone who comes from a warrior-noble house and someone who is a slave.

To be honest, I would say the romantic aspects of the book are its main weakness. You can argue that romance isn’t the point of the novel, and I’d agree, but love plays an important role in the plot so the fact that its execution is clumsy detracts. The book has a love polygon in action and while I appreciate the intent behind the authorial choices contributing to this, it further fueled to my cognitive dissonance. An Ember in the Ashes takes place in a fantasy world based on Rome, not a contemporary modern-day high school. What made it even more awkward is that some of the characters aren’t teenagers, so to see them acting like this in a fantasy setting was strange for me.

My biggest reservation, however, is the fact that I was led to believe this novel was a standalone. And don’t get me wrong; it does stand alone. It doesn’t have a cliffhanger. But the ending is clearly open-ended and not in a satisfying way. I did some research, and I discovered there are no other books contracted, so I can only assume it’s not meant to be a series. Unfortunately, it reads like one and I’m not sure how I feel about this.

Despite all those reservations, there is a lot to like about this book. Once I started reading, I couldn’t stop. The plot keeps moving, and I had to see how everything works out. However, I wish the narrative execution of the relationships didn’t feel so forced and awkward. Assigning a grade is pretty difficult but all things considered, I’d give this a B-.