I’m always on the lookout for a good fantasy story. They are rare in romance, perhaps because those writers that are devoted to this sub genre are more interested in exploring heroic tropes that are common in fantasy rather than romantic tropes. 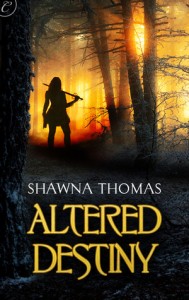 The setting is in some fantasy old world country and there are two basic types of beings: humans and Svistra.  The Svistra are fed by blood and are known to be great fighters.  There numbers are small.  The Svistra were hired by human kings to fight in battles but because of the Svistra’s predilection for blood, the humans cast the Svistra out and drove them to a northern, inhospitable climate.  Unbeknowst to the humans, the thirteen different tribes of the Svistra have united under one leader, Torin, and they are going to war to claim land in the South. This was land that was promised to the Svistra in payment for fighting for the human kings.

Jaden, Torin’s son, believes that fighting will be disastrous to the Svistra because so many of the small numbers will die and war increase the humans’ distrust and hatred against the Svistra.  Jaden leaves his people, a voluntary outcast.  Keldar, Torin’s other son and Jaden’s half brother, is war hungry and when his father doesn’t move fast enough toward war, Keldar kills the father and begins to mobilize the Svistra.  The only challenge to his rule is Jaden, considered to be the legitimate heir and held in esteem by those who seek peace. Keldar attempts to kill Jaden several times.

It is after an attack that Jaden seeks refuge in the stable of a tavern owned by Selia and her friend Oren.  Oren is a bit slow but he is muscle to Selia’s swift thinking and they view each other as family.  Despite their fear of Svistra, Selia and Oren nurse Jaden back to health.  Unfortunatley, Oren is then conscripted to fight in the impending war between the humans and the Svistra.  Oren is not a fighter and Selia knows Oren will not be safe.  She decies to travel north to get him back.  Jaden helps her as the journey is perilous.  Selia is a capable fighter but she’s unfamiliar with the secrets of the land.

There are a couple of things I thought were particularly well done. One was the building of Jaden’s character.  In the beginning I had doubts that Jaden could be a leader.  He seemed very soft spoken and his abandonment of his people, without even seeking to pursue peace, made me wonder how his people would truly embrace him if he returned home.  But the journey with Selia combined with the news of the impending war weighs on Jaden and you can see his transformation driven by guilt and love. Second,  Selia is a great heroine.  She wielded her brain and her knives with equal thoughtfulness and skill.  I appreciated that the story was written in such a way that Selia is presented as an equal to Jaden

While the romance between Jaden and Selia builds as they are forced to rely upon each other during their journey, it builds a bit too slow for me.  I would have liked more time with the two spent together.  This is actually related to my second complaint.

Like many fantasy stories, this story involves political manueverings, threats of war, unexpected heroes, and a large landscape.  Unlike many fantasy stories the entirety of the war is encompassed in this one  story.  Because of that, I felt that the book lost steam toward the end because all of the problems that arose throughout the story including the difficult political issues are resolved in the last couple of chapters.   Further, I felt like key confrontation scenes were totally skipped. Obviously the racial tensions on an individual basis still exists and any peace that is struck is tentative and therefore there is plenty left to write about, but I did think that the resolution didn’t match the intensity of the build up nor the pacing. Either the first three parts needed to move faster or there should have been more than one book to tease out the resolutions to the weighty issues.  B-