I’m glad young adult novels have started to move on from the dystopian craze. After all, there can be only so many books about oppressive future societies whose citizens don’t necessarily recognize as oppressive and the teens who fight the system. To be honest, I’ve been yearning for more action-based thrillers. Your debut novel, Altered, scratches that itch but still left me wanting for more. 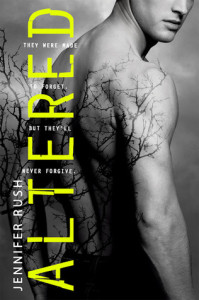 Anna lives a secretive life. Homeschooled, she spends much of her time helping her father with his work. What’s his work, you ask? Four boys living in their basement.

The boys are living experiments. They’ve been genetically engineered and Anna’s father monitors their vitals and runs test to examine their progress. But when the agency in charge of the project comes to retrieve the boys, they escape. And because her father urges her to accompany them for her own safety, Anna goes with them.

On the run from the agency, Anna and the boys piece together the memories of their past. You see, none of the boys have any recollection of their time before living in Anna’s basement. But as they uncover secret after secret, it becomes apparent that Anna is connected to their past and may not be who she thought she was at all.

This is a difficult book to review. It’s flawed in so many ways but I enjoyed reading it. The plot moves at a fast clip and I found myself unable to stop turning the pages. Because of the fast pace, it’s easy to get swept up in the story and fall into step with the narrative’s internal logic. But when I finished the novel and returned to the real world, I realized so many things do not make sense.

For example, Anna first encounters the boys at the age of thirteen when she wandered into the basement beneath the family farmhouse. Now I don’t know about you but if I were to discover four boys living in cells beneath my house, I’d have screamed bloody murder. These aren’t little boxes either. This a high security facility, complete with an access code required for access, and not to mention all the equipment necessary to run blood tests and a battery physical and psychological exams. On top of that, she soon becomes her father’s assistant when it comes to treating the boys. That is hardly normal and Anna taking it all in stride requires a huge suspension of disbelief.

Even though it’s revealed early on that the agency indulges in mind control and memory alteration, those two details remain huge questions for a large portion of the book. I can see this going either way for readers. It may propel some people through the book in the hopes of finding more answers. Others may get frustrated because nothing about that makes sense. Who recruits their thirteen year old daughter to assist in experiments upon genetically engineered soldiers? Right from the get-go, something is not right. I will say it’s explained late in the novel but that might require more delayed gratification than some people are willing to tolerate.

Most of the plot is devoted to Anna and the boys fleeing from the agency while trying to find out their connections to it. As you’d expect from this sort of story, there’s lots of running, hiding, near-captures, and dramatic escapes. It’s very much like a TV show in that respect.

But maybe because of that, the characterization is shallow. Each boy has a defining trait: the hot leader love interest, the one who’s like a big brother, the antagonistic one, the comic relief with a bottomless stomach. But other than Sam, the leader of the boys, I didn’t see it going far beyond that despite some rudimentary attempts to flesh out their backgrounds.

The romance between Anna and Sam is rote. She’s been fascinated by him ever since she was thirteen but I thought it could have used more delving. After all, there’s a huge difference between being a thirteen-year-old girl crushing on a hot boy who will forever separated from you by a glass wall and being a seventeen-year-old girl interacting with that hot boy in close, personal quarters. To make that romance work, the issues arising from that change really need more exploration, especially when you take into account certain revelations from Sam’s past.

Despite enjoying the breathless pacing of the book, I’m left with many questions and wish certain things had been explored. The boys have been genetically engineered. They are killing machines whose services are sold to the highest bidder. Their memories have been wiped multiple times. Some characters have had new memories implanted. There are forms of biological control at play. These are heavy topics. Or should be. It’s a little disappointing that the ramifications of these things aren’t given the weight they deserve.

Even though I found the story very flawed, I did enjoy Altered. It’s a good choice if you’re in the mood for action and cat and mouse chase scenes. Just don’t expect much attention be given to the worldbuilding and the issues that arise from it. B-