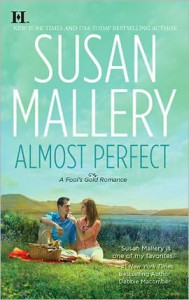 As you might have guessed, I have a love/hate relationship with your books.   My favorite is Simply Irresistible and I don't know if I could pinpoint exactly why but it is a contemporary I recommend with some regularity.   (I tried to give it to some reporter for NBC at the RWA in San Francisco but I can't remember if she took it or not).   The problem I had with the first book in the series is that I felt that the premise didn't match up with the way the story played out. Luckily I had no such problems with Almost Perfect. (As an aside, if you don't want to read my review, read natuschan because her review reflects most of my feelings about this book).

Almost Perfect is an amalgamation of popular contemporary romance tropes.   It has the secret baby.   The small town girl from the wrong side of the tracks making it big and coming home to win the heart of the town's golden boy.   The small town ostracizing the bad girl and then coming around to protect her.

Liz Sutton was a pretty girl whose mom is the town bicycle and because of her looks, her mother's promiscuity, and their poverty, Liz is targeted in high school as a slut.   She isn't, though, and doesn't give up her virginity until she falls for Ethan Hendrix, back from college.   Ethan is the son of one of the town's founding families.   He urges her to keep their relationship secret. One day she overhears him being asked if he is seeing her and he denies it and denies ever wanting someone like her.

Liz is crushed and runs away only to discover she is pregnant.   She returns to Fool's Gold   but finds Ethan in bed in his tiny apartment above his parent's garage with another girl, a girl who was mean and horrible to Liz in high school.   Liz runs away again.   Five years later she returns, feeling guilty about having kept their son a secret.   Only Ethan isn't there and he is married so Liz tells Ethan's wife about the son and in return receives a letter from Ethan telling her he wants nothing to do with her or her son.

Fast forward 6 years.   Liz is now a successful mystery writer but returns home to Fool's Gold when she discovers her nieces have been abandoned by their stepmother after their father (and her brother) was sent to prison.

Everyone in town treats her like she pariah.   They never thought much of her before and they despise her even more for keeping Ethan's son away from him.   In turn, Liz can't wait to shake the dust of Fool's Gold off her feet fast enough.

Like Nat, I thought the kids were realistically portrayed in the book.   Liz was a great parent and her son, Tyler, is really well adjusted but finding out who his dad was throws a wrench in things and suddenly Tyler thinks he loves his dad more, maybe even wants to live with his dad.   Then there are her two nieces.   Liz hasn't been much of an aunt before and these two girls are very gunshy when it comes to parenting adults.   They don't welcome Liz wholeheartedly.

I also appreciated the showing of how difficult parenting is, particularly when Ethan is forced to realize it isn't all pizza parties and take out.

I was a little disappointed at how quickly Liz fell back into bed with Ethan.   I recognize she had been alone for a long time and that despite the way Ethan had failed to be there for her, repeatedly, throughout the years, that she had a lot of feeling for him.   But more importantly, they did not use a condom.   WHAT THE HELL!   She had gotten pregnant with Tyler being with Ethan in high school and had to raise the kid by herself for 11 years.   She never once thought to use a condom?   I guess it was to show how swept away by passion they were, but seriously?

I liked Evan less than I did Liz.   Like Nat, I felt he was incredibly selfish and rarely thought about anyone else's feelings but his own.   He had a strong code of honor yet it was never employed for the benefit of Liz.   In fact, throughout the book, he continually acted in a manner that seemed unconsciously designed to hurt Liz.   Eventually he comes around and makes a grand gesture, but I never quite felt like he loved Liz like she was his one true love.   He seemed like   one of those guys who just wants to be in a relationship and so long as that relationship provided him with a comfortable life, he would be satisfied.   I wondered whether he knew himself.

Still, I did understand Liz's attraction for Ethan.   He represented all that she never had: safety, security and respect.   Add in that she was sexually attracted to him; he was her first love and the father of her child; and it all made sense why she was with Ethan.     There was a weird suspense plot at the very end which I think served to distract from the coalescing of the romance than further it.     It came out of nowhere and I don't think it was needed to propel the characters to the end point.

In the end, though, I agree with Nat that Liz is what makes this book.   She refuses to be intimidated, she accepts responsibility for her actions, and she stands up to her critics whether it is Ethan's mom, the town or even Ethan himself.     B-