REVIEW: All that Mullarkey by Sue Moorcroft

Do you have some inner drive to write flawed heroines? Because both books of yours that I’ve read have featured them but here in “All that Mullarkey,” you’ve really gone all out and presented us with a woman who might trip a few triggers. 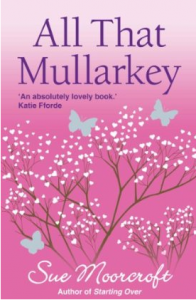 “Revenge and love: it’s a thin line… The writing’s on the wall for Cleo and Gav. The bedroom wall, to be precise. And it says ‘This marriage is over.’ Wounded and furious, Cleo embarks on a night out with the girls, which turns into a glorious one night stand with… Justin, centrefold material and irrepressibly irresponsible. He loves a little wildness in a woman and he’s in the right place at the right time to enjoy Cleo’s. But it’s Cleo who has to pick up the pieces of a marriage based on a lie and the lasting repercussions of that night. Torn between laid-back Justin and control freak Gav, she’s a free spirit that life is trying to tie down. But the rewards are worth it!”

As I said, you’re definitely specializing in flawed heroines. Here Cleo reacts to her husband’s unreasonable demands by heading off to a bar to meet her sister. After hooking up with Justin, she – via the inducement of alcohol – goes off with him for a one night fling only to have things go wrong as far as pregnancy precautions go. Which she then repeats with Gav after which she puts off her pregnancy testing until way too late. It is understandable to a point but then, hey, let’s get real as the signs are all there and need to be headed. But the bit about Cleo buying the pregnancy test is hilarious. I do like that once she’s sure of the pregnancy, her first instinct is to tell Justin immediately and, even after his spectacular “don’t contact me” speech, as soon as the baby is born, she still makes the effort to let him know he’s a father.

All that being said, however, after she faces up to her pregnancy, she does a good job and seems to be a wonderful mother. Her interactions with Shona remind me of a coworker of mine who doesn’t baby talk to her daughter either. The advanced things my friend says come out of that child’s mouth…

Lots of people might have problems with some of Cleo’s actions. Though perhaps not with the adultery as it’s only one time and then it turns out that Gav had also cheated once on her. Even her divorce isn’t totally out of line as Gav had kept key information from her and combined with the other failing aspects of their marriage I could see them calling it quits. But, and this is a big but, Gav’s later actions seem there merely to further justify Cleo’s “rightness” in what she did. The major secret Gav had kept from Cleo was enough for me. His further descent appears only to make Cleo look better for her choices. Once Cleo figures out what Gav’s done, the confrontation scene takes the wind out of his sails – too quickly, maybe?

Justin takes the usual female high road in their adultery which was fun to read. He’s outraged at being “used” for sex by a married woman but tends to hissy fit at bit too much for my belief. Plus the number of times he shows up for a key interaction with Cleo, only to conveniently find Gav there as well to cause friction, strained belief. But Justin is right in that though Gav might know a lot about Cleo – her past, her A levels, etc, Justin *knows* Cleo in that he’s got a connection with her that safe Gav doesn’t.

Cleo’s work involves getting business people to listen and interact with each other better yet she hasn’t been doing this in her marriage and doesn’t do it with Justin for ages. She’s got to mature personally in order to get her HEA. I also find it interesting that this is the second straight novel in which your heroine has poor relations with her parents. Is this supposed to mean something?

There is a long, 18 month break in the action and then still more time before the final HEA. Which I find a nice change from a lot of too quick romance novels. It seems to me that the book is more women’s fiction than romance – with a soupÃ§on of chick lit thrown in. But even then it was truly down to the wire before a HEA was in sight. I think you might make some people nervous about this. Cleo’s capitulation was rather sudden and once they finally talked, they cleared things up so quickly – the ubiquitous 5 minute talk – that all the conflict that went before seemed rather pointless.

You do include some touches of realism that I really like. So much of the story is carried out through text messages, emails and mobile(cell) phone calls. As well, not everyone is thrilled with their friend’s choice in romance. And it’s great to see a little of Ratty again – same old Ratty the real estate tycoon. I wish I could deal with my junk mail as Cleo does – in the wood stove fire.

You take a lot of chances with “All that Mullarkey.” I applaud most of them though they might be deal breakers for some readers. And even though I have some problems with the book, you are still an author I do plan to keep up with as you make reading interesting and beyond the ordinary. B-