REVIEW: All of You by Christina Lee

I’ve been slow to climb on the new adult train. I’ve read a few but I keep running into what I call the Trauma Wall. So much trauma. So many victimized characters. I get that angst is very popular in the genre right now, but I can only read that sort of thing in small doses. Still, I was intrigued by the idea of a virgin hero so I picked up your debut. 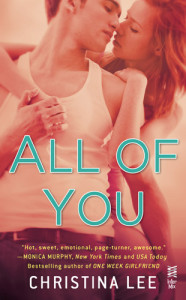 Avery doesn’t do relationships. One night stands and friends with benefits are more her speed. When a hot tattoo artist, Bennett, moves into the apartment upstairs, she thinks she’s met her next hook up. There’s only one problem. Bennett wants a more lasting relationship with her, and that is the one thing she can’t give him.

Like many NA protagonists, Avery has a traumatized past and the fact that she’s female should give a big clue as to what type of trauma it is. The narrative treated it as this big skeleton in the closet, but it was very obvious what had happened in her past. By the time the details were finally revealed, I was tired of all the skirting around the subject. There’s a fine balance between keeping a secret to heighten tension and just drawing it out needlessly, and I think All of You tips towards the latter.

One thing I did like about the treatment, however, is that there were lasting effects on her behavior. Avery is in complete control of her sexuality. She controls who she sleeps with and when, where, and how it happens. She’s not ashamed of her sexuality and screw anyone who thinks she should be.

Both Avery and Bennett come from similar family backgrounds: no father present while they were growing up and a neglectful mother with a tendency to date terrible men. It gives them common ground. But while that history made Avery not want to form any permanent relationships with men, it made Bennett very cautious and careful about who he has sex with.

I liked that the usual relationship dynamic was flipped. In All of You, the heroine is the one with lots of sexual experience while the hero is a virgin. I thought that reversal was great, and I got what the subversion was trying to accomplish. In other romances, the sexually experienced hero sleeps around indiscriminately until he meets the heroine, and then he stops because he’s met The One. In All of You, a similar thing happens except the gender roles are switched and that’s refreshing. But because Avery is a woman, there’s an aspect to it that’s not present in the male character equivalent. Namely, because of her history and family background, the subtext is that Avery sleeps around because she’s broken. Her own brother even implies it. Like there has to be reason why she sleeps with multiple partners beyond she wants to. And this is where the subversion starts falling apart for me. If a hero can sleep around because he’s alpha and hot, why can’t a heroine sleep around just because she’s alpha and hot? Does she need a traumatic, broken backstory to justify that behavior?

For the most part, Bennett is all right with Avery’s sexual experience but only in a theoretical context. There are a couple times in the novel when he comes face to face with her previous partners and loses it, but I found that reaction believable, sadly. Despite these scenes, I was fine with those depictions because the narrative makes a point to say he has no right to feel that way. Bennett is genuinely sorry he reacted the way he did. The same also goes for Avery. The narrative clearly says she has no right to feel jealous of the girls Bennett talks to because she’s made it clear she wants no relationship with him. She knows and Bennett calls her on it.

The main complaint I have pertains to the subplot involving Avery’s stepfather. The way that played out seemed forced and contrived. It seemed like it was present for the sole purpose of bringing Avery and Bennett together and then once that happened, the set-up required some closure.

I thought All of You was a good portrayal of two people with opposing desires falling in love. They spend a long time negotiating the ins and outs of their relationship. They go from an initial attraction to determining it wouldn’t work because they clearly want different things to trying to be purely platonic (and very much failing). I enjoy reading about evolving relationships and how they change as the people involved get to know one another and in that sense, All of You delivered. B-

→ Jia
Previous article: It’s not just what we say, but also what we mean
Next Post: REVIEW: Lethal Pursuit by Kaylea Cross