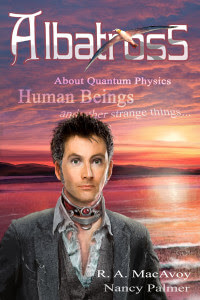 Quantum field theory is the less known brother of Particle Physics. But Dr. Rob MacAulay has followed it instinctively all his life, as he has followed the flight of seabirds over the island on which he was born. As the EU fractures around him, this gentle, tall man, with his glasses and his laser pointer under his old tweed jacket, finds himself under the steamroller of politics, and on the run from the police. He alone has solved the Unity Theory, but how does that matter now, as the police are convinced he is a terrorist? He himself is becoming quite terrified.
Thomas Heddiman, technical consultant with the police, finds himself both running with the fox and hunting with the hounds as he pursues the man, wondering just how odd a bird Dr. MacAulay is.

Award winning author R. A. MacAvoy (Tea with the Black Dragon, The Grey Horse) joins with artist and storyteller Nancy Palmer to present a tale of the possible future, human anger, and human compassion — and a man who turns out to be a very odd bird indeed.

I learned about your book when I read Liz Carey’s review on File770, where I lurk regularly. I was not as impressed with it as she was, but I enjoyed it well enough. I also want to note that when I was buying the book I had no idea that it contained and m/m romance, and I was pleasantly surprised when I found out.

The book takes place in a very near future of “our” world – I put it in quotations because even if the fictional world resembles ours, it is still a specific setting and does not look exactly like ours. The EU is in turmoil and the people who have overtaken the British Parliament make some very reactionary laws. In the meantime Rob MacAulay is on the run from the British/Scottish police (I put both because I was not very clear on the Scotland’s status at the time of the story – I think their parliament was no more and separatist movement was very strong but besides that I was not too sure).

Rob is a brilliant physicist and world-famous professor from Scotland. He was nominated for the Nobel prize several years before the story begins, and he is well known and loved by most Highlanders. He lost his beloved wife to cancer few years ago and now he is being falsely accused of murder. Rob does not really care about politics, but for some reason the separatist movement decided to have him as their figurehead (apparently this meant that everybody was sheltering him and helping him to stay away from the police for couple years). When the story begins, Rob is stressed, starved and pretty much at the end of the rope. He becomes hurt early in the story and after kind people helped him, he left and went on the run again.

Thomas Heddiman, an American who helps the police in tracking financial crimes (and does his own thing which I do not want to talk about because spoilers) tracks down Rob and manages to convince him to surrender, which Rob agrees to as long as no one who gave him shelter will be persecuted – he is exhausted and really does not have the strength to keep running.

“Mostly he spent his hours considering the situation he was now in with the government, and the absurd laws being passed. He was deeply concerned about what he had done to the people around him over the past two years, because now it seemed anyone found to have harbored a terrorist — and that was him — was considered to be equally guilty of the crime of terrorism”

But Thomas has his own agenda and apparently his agenda includes keeping Rob safe even if he achieves it by doing something that Rob may not like. I prefer that you read and decide whether you are able to buy the plot device that brings them together. I did not – I thought that despite the darkening atmosphere in Britain there was still a very long way to go before they would the law which was introduced, and I needed way better economic and political justifications than were provided.

However when they do live in close proximity and when it is very clear right away that Thomas is only concerned with changing Rob’s situation for the better, I really enjoyed their interactions.

That’s what Thomas wanted per his own words:

It was sweet overall, despite what politicians were doing. The book was full of a belief in better nature of the humans. Just think about it, nobody in Scotland snitched on Rob while he was on the run.

“Could all of the Scottish Highlands be hiding MacAulay, without a single snitch? That was not how human beings worked, in Thomas’ experience.”

I admit that I want to believe that it is possible that so many people could be kind to a fugitive on the run (in whose guilt they do not believe of course), but I have become too cynical for that. I do like the scenarios that appeal to our better nature though – no doubt about that.

Besides being not sure about the plot device that brought them together, I also lowered my grade because I was confused about the role of Quantum physics in the story. I did not do it because I am so bad with physics – in fact that was one of the main reasons I was attracted to the story. I was curious about something I do not know and the chance to learn something new.

I ended up being confused about why the heck the physics were needed in the story in the first place. Oh I understand that the love for physics at least partially made Rob who he is and that he has the certain cool ability, but I did not see how this influenced the plot much. Rob did get to be a superhero on the small scale couple of times, so if that was the idea and contributed to his character building, then I guess it’s OK? But I expected more of the actual science to be in the story, especially since this was in the title, and I had no idea that the story has m/m romance front and center.

I am also wondering if I can call this story Gay For You – I will leave it up to the reader to decide, because I just don’t know. If it is GFY, I certainly do not think it was done to objectify – there are no sex scenes in the book anyway, but Rob loved his wife and then he and Tom fall for each other (Tom is gay). Their only conversation about identities was Tom making a comment about Rob being straight and Rob responding that he was making a lot of assumptions. Rob never actually identifies himself, so I decided to think about him as bisexual.
Grade: B-