REVIEW: Addicted to You by Bethany Kane 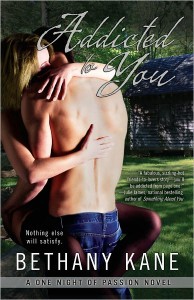 Katie Hughes, Everett Hughes, and Rill Pierce have been friends since their teens, the Hughes family adopting the young man from Ireland. Rill, a famous movie director and script writer, who had directed Everett Hughes in six of his films. Katie did not go in front of the screen choosing to be a tax attorney in Beverly Hills. Katie has been in love with Rill since he first came into her life but he’s never looked at her as anything as his best friend’s little sister. Rill married an actress named Eden but 18 months ago, she died and Rill ran away ending up in Vulture’s Canyon, Illinois. Why he ran away and the reason for his emotional withdrawal is far more complicated than the fact that his wife had died. Instead it is wrapped up in Rill’s sexual identity. Essentially, Rill is afraid of his own sexual nature, afraid that he’ll somehow let go and become overcome by his “unnatural” urges. He’s taken up drinking as his only hobby. (Was he an alcoholic? I never felt like this was well addressed).

There’s something about how you write the sex scenes that make them compelling. I think it’s the activity and by that I mean, there’s movement both in the action of the characters, but also in the emotion expressed through internal monologue and dialogue. During the scene, we know what the characters are feeling at each given moment and that’s important to me. I think the scenes also include the five senses: what the characters smell, taste, feel, hear, and see. They are very alive for me. Plus, there is a lot of emotion leading up to the acts itself.

Katie has come to save Rill from himself and unexpectedly finds herself the intense focus of Rill’s suppressed passions. So the first scene. Rill is the drunk off his ass. Katie shows up at his door. And … Rill proceeds to have sex with Katie without a condom. While this was incredible sensuous scene, I kept thinking that Rill wasn’t in complete control over his own mind and Katie should have put a stop to it. If roles were reversed and Katie was totally drunk, I don’t think I would have been okay with Rill having sex with Katie. And Katie! Katie, girl, I know this is the man of your dreams, but make him suit up, okay?

I liked that Katie has decided that Rill has had enough time to damage himself and that she wants him to wake up and realize that she’s a good partner for him, both in bed and out of it. She doesn’t back down from Rill or her brother but is pursuing her own desires. Rill, afraid of his attraction toward his BFF’s little sister, runs hot and cold. This is offset, though, by Katie’s mostly level headedness. I wanted Rill for Katie because Katie wanted Rill and Rill’s waffling wasn’t because he didn’t want Katie, but because he wanted her too much. Rill is full of a lot of self disgust and doesn’t want to sully Katie’s precious being with his dirty hands and even dirtier mind. Of course, everyone else from Katie to the reader is encouraging him to defile her in every way possible.

Even though Rill was married previously, I never felt that Rill hadn’t completely fallen for Katie by the end. I was charmed by the small town of Vulture’s Canyon and the inhabitants.

I think where readers may stumble include the overt sexual nature of Rill’s recovery (it’s the magic hoo haa) although this did not bother me. Why Vulture’s Canyon? Why would they stay there? Wouldn’t their positions take them elsewhere? Why wasn’t Katie happy as a tax attorney in Bev Hills? Didn’t she have any other friends/family she would miss? And for all the build up over Rill’s dark side, I was a little deflated (pun intended) when I discovered his dark side. Maybe I’m simply too debauched by my past erotic readings, but Rill’s passionate nature seemed quite normal to me and his angsting over his sexual beast became a bit tiresome.