REVIEW: A Tryst With Trouble by Alyssa Everett

Note: I posted a review of this book on Monday and then realized I have another review for the book. That’s three reviews so this is a bonus review today.  No, you haven’t read it yet. I promise.  This title was originally reviewed by Jennie when the story was released through Dorchester. Dorchester went closed its doors and this book was never for sale. You can read Jennie’s review here.

I’m one of those readers who absolutely adores a good, strong heroine paired with a powerful, thoughtful hero in a Regency-era romance. Throw in some mischief, perhaps a good mystery, and mix it all with passion, and you’ve more than got my undying gratitude. In A Tryst with Trouble, we find Lady Barbara Jeffords, an almost on the shelf young lady of gentle breeding matching wits with Lord Beningbrough (Ben), heir to the infamous Duke of Ormesby. They first encounter each other as Ben is acting as moral support for his cousin who is attempting to cry off a wedding with Barbara’s sister, the flighty and sweetly manipulative Lady Helen, thanks to some quietly spoken rumors. Unfortunately, the third party in the rumors, Sam, a neighbor’s footman, is found dead. Barbara and Ben are forced to work together, unwillingly, to clear the names of their relatives and discover the culprit behind the dastardly deed. Their task is complicated by their growing affection for each other – and a spy intent on keeping them apart. 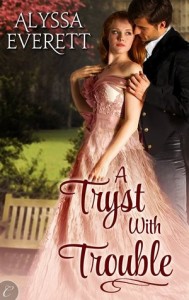 Both Ben and Barbara are very strong characters in the beginning, yet as the end draws near, both of them seem to lose their strength, becoming pale imitations of the pair we first met. It’s almost as though that, in growing and changing as people, they lose an integral piece of themselves. Perhaps it’s a factor of their character evolution, but they moved from strong and steadfast to much more emotional and seemingly scattered. Once the danger became real, they both realized that this was much more serious than previously thought and lost not only their levity, but their focus as well. Which is odd – as much was made of the gravity of the situation in earlier chapters.

Of particular note was the character development in the secondary characters – particularly Lady Helen and Lord (Teddy) Cliburne. Lady Helen is one of those absolutely perfect “diamonds of the first water” found in just about every single Regency written. She’s the pretty one of the sisters, the one with blue eyes and blonde hair, and the utterly manipulative-seeming nature. And while she holds true to form, there’s clearly more to her than first meets the eye. She’s not overly deep, mind you, but she’s beautifully portrayed. Teddy is absolutely adorable. It would be easy to see how the pair of them would have absolutely gorgeous, completely vapid children. While Teddy is of a very sweet nature, he has the backbone of a ragdoll – and yet he’s a sympathetic character. These two are stereotypes, of course, but they’re done in such a way that there’s just a little bit of a tweak to them, making them more interesting than most.

I absolutely loved the fact that you addressed the Duke’s “infamy” in such a genteel and straightforward way. One thing that is notably absent from many Regency romances is the idea of same-sex couplings. In most books, couples engaged in same-sex relationships are portrayed as caricatures and in the most negative light. Yet you presented the Duke, and his relationship with the his Duchess, in a sensitive and utterly delightful manner, focusing on how the standards of the time – namely arranged marriages and the lack of love matches – could not only impact a relationship, but also strengthen it.

One of the things that bothered me a bit was the liberties taken with the conventions of the time. It seemed a little too convenient that Barbara had Ben in her room, alone, with the door closed, not once, but twice throughout the course of the book. While it’s true that Barbara was sure she’d never receive an offer of marriage, just the hint that she’d been sequestered sans chaperone with Ben would have been enough to bring disgrace down upon the whole household if even a hint of the scandal had escaped.

On the whole, I found the book to be smart and sassy, with enough of a nod to the conventions of the time to fit into the genre, yet it had just the perfect amount of tongue-in-cheek attitude to make it interesting. I look forward to finding more of your books and immersing myself in a world viewed through a very slightly skewed lens. B

The narrative technique used here — alternating first person points of view from the hero and heroine — reminded me strongly of the young adult books I read when I was a teenager. That resemblance is emphasized by the nature of each main character’s inner conflict: Lady Barbara feels humiliated because her suitors always fall for her more popular sister; Lord Beningbrough, commonly known as Ben, is disgusted by what he see as his parents’ sham marriage and worried that he might someday become a “sodomite” like his father. Although both characters are in their twenties, it’s total teen angst — plus, the two sleuth together, scuffle like siblings, and even have an encounter featuring an inconvenient, embarrassing erection.

If all this this had been done in a coyly overt style, it would have been unbearable. Instead, reading the book as Regency YA made it curiously endearing. (And kind of appropriate that though there’s some sensual intimacy, we never see the actual consummation.) Even elements I normally loathe — a mystery, and a bickering couple — worked for me here. Could this be why so many young adult novels are written in the first person — because it makes their self-absorbed angst more understandable?

Ben has been uncomfortable about his family life ever since he first went away to school and discovered his beloved father was known for being a “bugger.” While frequently proving his manhood with his fists or in bed, he secretly worries that he might wake up with unnatural inclinations one day, and even deliberately suppresses his tastes for elegant clothing. (I’m not sure if this makes sense in historical context.) His anger towards his parents has made him cynical about marriage, and meeting the gorgeous but hotheaded Lady Barbara does nothing to change his mind. But a murder in Barbara’s household, in which Ben’s cousin is a suspect, causes them to form an uneasy alliance to solve the mystery. Along the way, Ben realizes that he still needs his father, Barbara realizes that her jealousy of her sister isn’t one-sided, and of course the two fall in love.

The mystery… eh, it’s reasonably well done and serves its purposes for the story, though Ben gets so many injuries to the head from the villain, my eyes were rolling right along with his. I didn’t like the plot so much as not mind it. But I was unexpectedly charmed by Ben and Barbara and completely engaged with their volatile relationship, perhaps because the first person narratives made it easier to see why this arrogantly insecure pair bump heads so much, and also how they begin to truly like each other:

Barbara: “Considering he’d been boasting only the night before about the hordes of beautiful women he’d bedded, Ben’s remarks should have sounded hypocritical. Yet he looked more sad than sanctimonious, as if he were genuinely troubled by all the faithlessness in the world.”

Ben: “Sometimes I wished Barbara weren’t so cursed fearless. Between the kisses we’d shared and her admission tonight that winning didn’t come as easily to her as it appeared — a startling show of vulnerability, considering she managed to outdo me at every turn — I’d begun to feel oddly protective of her. Protective of her, and completely unbalanced.”

I also liked that Barbara discovers how attractive she really is. The heroine who despises her big breasts is rightly mocked by romance readers, but Barbara’s feelings make sense in context, since her sister is so much more fashionably attractive. Still, it helps plausibility that Ben isn’t magically the only person to appreciate her striking beauty.

A Tryst With Trouble was originally supposed to be published by Dorchester, but never appeared; it’s now coming out as an ebook from Carina. Jennie reviewed the ARC and gave it a C a year ago, saying, “it didn’t have much to distinguish it or raise it above the mediocre.” I understand her take on it: it’s certainly not a deep book, and the immaturity of the characters can be hard to swallow considering that Barbara is 24 and Ben 28! And it’s not the sort of romance likely to appeal to historical purists — I think the details in regard to titles and so forth are correct, but the cheeky humor has a modern sensibility. But it didn’t feel bloated or cutesy to me, as so many wallpaper Regencies do, and it just generally had a freshness that appealed to my jaded romance palate. The characters started to seem too clueless and stubborn towards the end, which brings my grade down to a still appreciative B-.