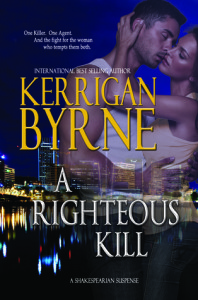 Mandi from SmexyBooks recommended this book to me an even though it was a fairly expensive self published book at nearly $6.00, I’m happy to spend money on a book I’ll enjoy. The book was as Mandi said. It featured a gruff, reluctant hero, a self possessed heroine, and a suspenseful plot.

Hero Viola Katrova-Conner is found with her hands and side pierced like Christ, the victim of a John the Baptist serial killer. Why Viola survives where the other victims live isn’t quite clear and you have to buy into the insta-lust between FBI agent Luca Ramirez who arrives on the scene as the agent in charge. There kneeling next to the victimized boy of Hero Viola, the two exchange meaningful glances. (Hero later says that he reminded her of her brothers).

The story essentially follows a standard suspense plot line. Hero is a damsel in distress and Luca is assigned to be her pretend boyfriend/bodyguard in hopes that the serial killer comes after her again. Luca begins to examine Hero’s male acquaintances in hopes to find out who it is. The FBI has few leads.

I confess that in retrospect, the lack of urgency in the pursuit of John the Baptist was puzzling. In order to make the romance more believable, the suspense plot takes serious hits. For instance, after the initial scene, we fast forward seven weeks later so that Hero is fully healed from her injuries.  She has very little emotional repercussions from her kidnapping, torture, and near death experience.

This is not to say I didn’t like Hero. I did. She’s a sexually confident woman while also being creative and pragmatic.  She pursued Luca because he was too reluctant to get involved with her even though sexual tension thrums between them. Luca doesn’t believe he’s good for Hero or any other woman because he has so much rage inside of him.

There’s a good blend of romance and suspense so long as you forget about the seven weeks during which the FBI does almost nothing in terms of investigating Hero’s background, her lifestyle, and every person in her life particularly since her profile was different than all the other “working girls” that had been targeted by the killer in the past.

The series is called “Shakesperean Suspense” and is likely based on all the Katrova-Conner family. The Katrova-Conner both exemplifies the best and worst of the book. When it was convenient to bring the whole family together, a big fun boisterous family, they were trotted out, particularly when they were needed to set up a future story.  But one of the family members was also an FBI agent. Didn’t it make sense for that person to be involved in her safety? Her four older brothers seemed almost nonchalant about her safety as did her parents.

Speaking of her parents, there is a prologue involving how the parents first meet that is self indulgent and unnecessary. There was no explanation later and no connection to the overall story.  The Katrova-Conner family sounds interesting and I’m definitely on board for more books, but I’d hope for less convenient appearances of the family to increase the series hook.

Finally, there were a couple of reviews that mention fat shaming. The story opens with Luca thinking fairly negative thoughts about a heavy set detective. I don’t see that continues throughout the book. In sum, there was a strong connection between the two main characters. I loved the family scenes and the whodunit wasn’t bad.  B-