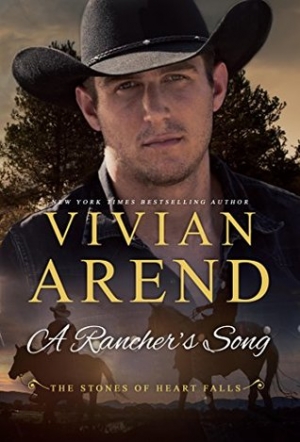 At the end of A Rancher’s Heart which was released late last year, readers got a tease of what may lay ahead for Walker Stone. He threw his guitar case in the back of his truck and headed off to try his luck in the music business.

So it was with some surprise A Rancher’s Song started off with Walker having a panic attack during a bull ride at a rodeo and very little was mentioned about his burgeoning music career. It seems that a number of months had passed between the end of book one and book two in the series but in that time, mostly Walker was doing the rodeo circuit and not the music one. And then he comes home to Heart Falls because panic attacks during a bull ride area not good for one’s continued longevity. He needs to sort out his head and decide what’s next.

I had thought, given the ending of A Rancher’s Heart that the decision had already been made. I have a vague memory of seeing a tweet or two from you to the effect that where you thought the story was going to go was not where it ended up. (Alternatively I could totally have made that up.) If my memory is correct, that may explain the differences in the two books. Because the story did not at all go where I thought it would go based on what I read in the first novel.

It’s clear that Walker has taken advantage of an opportunity to sing backup vocals for a single (or maybe an album?) for a friend of a friend and he has a chance to go on tour as a backup vocalist and potentially build a career in music from there. Or he could continue on the rodeo circuit. But in either case, he’d need to stop having panic attacks first. When he comes home to the ranch, he’s so happy to be home. There is a clear longing jumping off the page; Walker wants to be home with his family. But the ranch is facing some lean times and there is a risk of the family losing the property and Walker feels obligated to contribute to help. He feels the best option for him to do that is to head back out – either with music or bull riding – as he can make good money doing so and can send it back to the family. If he stays he’s just another ranch hand and anyone can do that, right?

To complicate matters, Walker’s high school sweetheart, Ivy Fields is back in town. They fell in love when they were teenagers but after graduation, Walker encouraged Ivy to leave Heart Falls and pursue her dream of becoming a teacher. The path to fulfilling that dream and eventually coming back home to take up a position at the local school took 11 long years. Ivy has no intention of leaving again.

Walker and Ivy still have feelings for each other and it doesn’t take long to realise that the intervening years have not changed their essential characters. They still love each other. But Ivy is staying and Walker has to leave so how can they be together?

The twist in the tail is that Ivy can’t “change her mind” about remaining in Heart Falls as easily as it might first appear. She has a significant health problem which affects her immune system. New environments and lots of people pose a health risk to her. Travelling is not on the cards so it is just as well she has no great ambition there. Part of the reason it took her so long to make it back home was that she spent a very long time recovering from illness when she was away, including lengthy hospital stays. It is clear early on that things got very dire indeed for a while there. Ivy’s disease isn’t specified. An Author’s Note in the book references you being inspired by a real life person you once knew. It isn’t really necessary to know the nature of Ivy’s medical condition. What is important for the book, is for reader’s to understand that Ivy has somewhat fragile health and this impacts upon what she can and can’t do.

Ivy is also very shy and introverted. She is better now than she was but she still needs to have breaks from people and prefers small groups to large crowds. She has learned coping strategies and is much more confident than she was but she will never be comfortable in the spotlight. Part of Ivy’s shyness is about her illness. When she was a child she had to isolate herself from people for her health but it is also her natural constitution. There is not a lot about Ivy’s very early childhood in the book but Ivy and her three sisters were all adopted (sisters by adoption, not biology) by Sophie and Malachi Fields and there is reference to them all being vulnerable and in need in one way or another and that is how the Fields’s chose them. So I inferred that Ivy had not had an easy time of it prior to becoming Sophie’s and Malachi’s daughter. (I don’t know exactly how old Ivy was when she was adopted – if it was in the book, I missed it.)

Initially Walker is resistant to picking up with Ivy because he knows he’s not staying but Ivy has learned a lot about resilience and going after what she wants since she was 18. While she is clearly not interested in being a weirdo stalker type, she’s not ready to just roll over.

She was going to have to move slowly. If he really didn’t want to stay in Heart Falls she wasn’t going to force him, but it seemed silly not to talk about this more. It would be wrong to not figure out what was going on in his head before she gave up completely.

I liked that Ivy’s introversion and the continuing effects of her medical condition were just built into the story. Certain allowances were made for her and by her so she could be happy and safe and it certainly had some impact on where any HEA could go given Ivy’s very real reason for wanting to stay in Heart Falls, but it wasn’t a story about Ivy’s health. It wasn’t a story about Ivy having a health crisis or about her getting over shyness or introversion. Ivy’s health and personality just were.

I loved how connected Walker and Ivy were. Walker is effortlessly considerate of her needs without being overprotective or fussing. He doesn’t treat her as fragile as spun glass or put her on a pedestal. He knows her and loves her for who she is; a resilient, smart woman with plans for her career and hopes for a future with him. There were perhaps some things about how they had lived their lives in the years they had been apart which I thought just a little far-fetched (particularly in Walker’s case) but I couldn’t be upset about them either.

Walker’s story arc is really about him deciding what he wants to do with his life; whether to stay or go and how, if he was to stay he can meaningfully contribute to the ranch and ensure the Stone family can stay on their land for generations to come. Necessarily, he has to deal with his panic attacks. As it happens, Ivy has some experience in dealing with such things and can offer some practical assistance there (when he finally opens up to her about it) but there was a glaring lack of actual professional assistance. I don’t think most people in real life get over panic attacks without seeing a doctor or a psychologist and many people need medication (for a period of time at least) and I wasn’t really sure the representation of Walker’s issue was ideal here.

The writing had some lovely similes, painting beautiful and apt word pictures in my head.

Conversation flitted like butterflies over a patch of wildflowers; the whole group for a while, smaller twos and threes at moments.

Fans of the Coleman series catch up briefly with Dare at her wedding to Jesse and Caleb and Tamara are happily settling into married life. Luke, the next brother to get a story, is further revealed and readers also meet a certain sexy fireman who will be featured in a novella to be released later this year.

I find your books reliably entertaining, easy to read page-turners with characters I can root for and love and A Rancher’s Song is no different where those things are concerned. I know I’m going to get an interesting family dynamic, different examples of what family can look like, banter and a bit of snark (particularly between siblings) and steamy sex scenes wrapped up in a love story between people who feel like they could be my friends (if they were real and lived anywhere near each other), and of course, the all important HEA. So I always open one of your books in happy anticipation knowing that the experience is pretty low risk. There is little chance I won’t like what I find.

Here, there were a couple of things that didn’t quite work for me; the main one being the distinct differences between Walker in A Rancher’s Heart and Walker in A Rancher’s Song (not so much in character but in continuity) but taken as a stand-alone, the book works very well. And even with those issues, the story is still sweet and sexy with a cinnamon roll hero and a solid romance.