REVIEW: A Night to Surrender by Tessa Dare

You are well known for your cute toy filled book trailers (Stud Club Trilogy / Maya Banks’ Highlander Trilogy) and I was tempted to do a lego review for this book. After all, I have a castle. 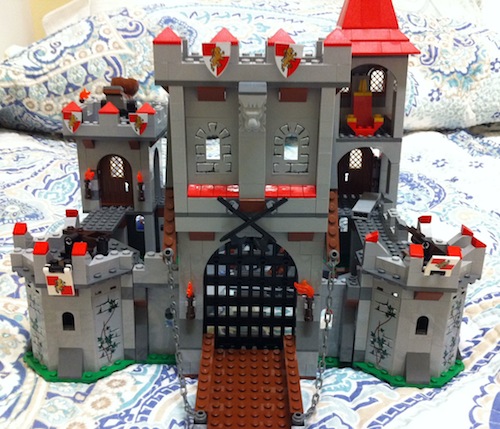 I bought some canons.

I have minifigs where the girl’s boobs look like they are busting out of her top like any decent romance heroine. 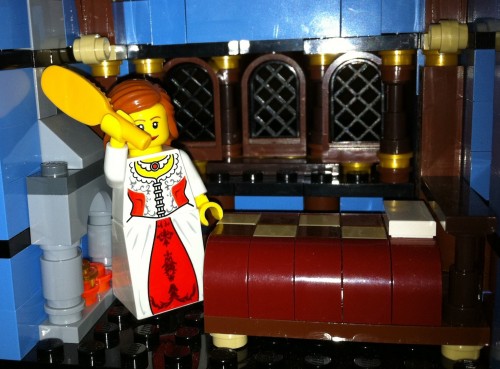 I don’t have a carriage but I did debate buying one. I have cows though which can depict a gentle, pastoral setting. 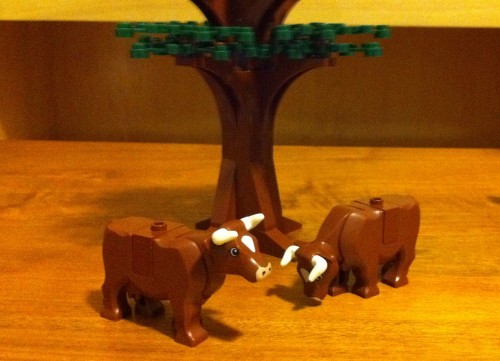 But alas, my Lego helpers have abandoned me for other things. 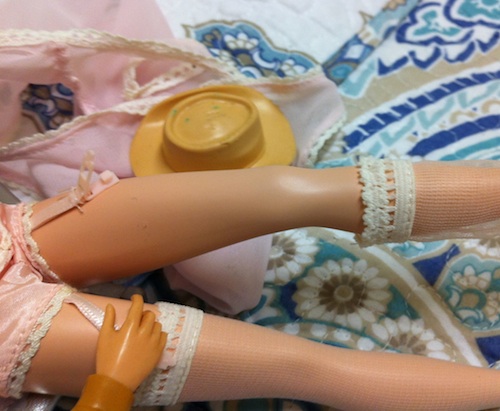 A Night to Surrender is the battle of the sexes story. It’s a very cute and sweet romance. At times, I just wanted to squeeze the book it was so darn adorable.  However, the battle of the sexes stories are notoriously difficult to do because you have to make sure that you don’t demonize one sex in order to elevate the other. On the macro scale, I thought you were less successful in portraying this because the entire story is about how this bucolic retreat for women was made better by a male outsider coming in and changing the male/female dynamic. On the micro scale, I felt that the two protagonists were portrayed as much more balanced. 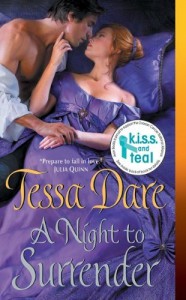 Spindle Cove has gained the reputation as a retreat for women, so much so that it is called Spinster’s Cove by some (a term probably coined by a male to be derisive). But Spindle Cove is a safe place for women to come. Susanna Finch is the daughter of the only local “gentleman”, Sir Lewis Finch, albeit an ignored daughter, and is the leader of her community. She is revered by both the men and the women. A gentlewoman by the name of Mrs. Highwood is considering sending her three daughters to stay at Spindle Cove. Susanna realizes that the bookish Minerva and the slightly asthmatic Diana whose treatment at the hands of male hacks has led her deeper into illness could do very well at Spindle Cove where they would gain self confidence and good health. Susanna’s plans to enfold the Highwood girls into the town’s embrace is placed in jeopardy by the arrival of Lieutenant Colonel Victor Bramwell. Bram plans to convince Sir Finch that Bram is fully capable of going back into battle despite his gimpy right knee.

Sir Finch is a “celebrated innovator of fireams and artillery”, is an advisor to the royals, and as such has enormous pull with the British military. A recommendation from Sir Finch all but guarantees Bram’s return to active duty.  Bram believes that his place is life is one of a soldier.  It’s all that he knows how to do and it’s how he measures his self worth.  Not soldiering feels like a diminishment to Bram.

Bram is then tasked with mounting a 24 man militia to march in the midsummer year’s fair. Bram eagerly accepts this challenge before realizing that finding 24 able bodied men to serve in the militia in Spindle’s Cove may be more difficult than spotting comets without a telescope. His cousin says that there are no men in Spinter’s Cove what with the women in the town completely emasculating anything that may have balls and stalk between their legs. Bram, however, is completely undone by a smart woman and Susannah with her talk of battle strategies and her competency with a gun nearly has Bram swooning.

The introduction of Bram, Colin, and their manly men set the town a flutter and none of the ladies can talk of anything else.  While some the book is a clever poke at societal expectations such as when Bram is told that he should marry and raise a family and give up soldiering, something undoubtedly told to hundreds of girls, there is also an unconscious undertone that something is wrong with Spindle Cove.  Before Bram comes to town apparently none of the men could stand up to Susanna and thus their tavern is turned into a teahouse and the smithy is not banging out horseshoes and swords but fashioning clasps on lockets. The truth is that Susanna is a good leader and the overt text of the story acknowledges this toward the end.

The story is funny and charming. The sexual tension between Susanna and Bram is immediate but believable. Susanna and Bram, both individually and together, are sharp and fulsome characters. There are no wasted scenes and the dialogue is snappy. I also felt that Susanna and Bram made a great couple and that their strengths and weaknesses overlapped. The story is very romantic with both characters making big gestures (and Bram making the biggest).

But I admit that throughout the book I felt uncomfortable. The idea that you seem to be heralding is that a balanced community is better than an unbalanced one, i.e., that everyone will be happier if the men are integrated in a equal fashion with the women. I think that this worldbuilding works better on a grander scale as in a science fiction where the entire world is unbalanced.  When the Cove, however, is one bastion of retreat for women where they can come and be judged not on the basis of their ability to pour tea and bear offspring, but on their intelligence and capabilities, does it really need to be changed? “They included the sickly, the scandalous, and the painfully shy; young wives disenchanted with the wrong men…All of them delivered here by the guardians to whom they presented problems, in hopes that the sea air would cure them of their ills.” The book goes on to say “No ‘cures’ were necessary. They didn’t need doctors pressing lancets to their veins, or daily doses of poison. They just needed a place to be themselves. Spindle Cove was that place.” Did Spindle Cove need to change? It seemed like a question that was never asked, let alone, answered. The absence of that debate, particularly given the stance of the leading female protagonist (aka heroine) was one that made this book a B- rather than a B.