REVIEW: A Most Precious Pearl by Piper Huguley 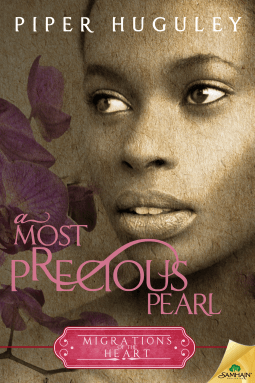 Caldwell returned from the Great War with nothing to show for it—as in nothingbelow his left knee. Forget about the journalism career he loved. His story is over. Done. Yet he finds the strength to journey to Winslow, Georgia, to get Ruby Bledsoe Morson’s sister out of trouble. Before he can bring Mags Bledsoe home, though, a spate of mysterious attacks reawakens his investigative instincts.

During the war, Mags did her duty to God and country by stepping into a management role at the textile mill. Now she’s been shuffled back to the rank and file—and Asa has her hard-earned job. Not only is the infernal man doing everything wrong, her plan for revenge against the mill owner who lynched her childhood sweetheart is farther out of reach than ever. As they clash over almost everything, Mags begins to set fire to Asa’s soul, bright enough to dim the memory of the killing fields of France. Enough to give him a new mission in life—to make her feel the same way.

When the previous book in the series, “A Virtuous Ruby” ended, the eldest sister of the Bledsoe clan, Ruby, was on her way north and free of the darkness of Winslow, Georgia. Well, when this one starts, she’s still as much a pistol (if you’ll pardon my saying so given how she orders Asa around) four years later. Now she’s going to get Asa doing what she wants and what she wants is her sister Margaret Ruth – or Mags as the family calls her – in Pittsburgh after Asa brings her there. Asa doesn’t stand a chance.

Asa knows he’s going down into an area of the country where Jim Crow rules and Negroes have to be careful of everything they do or say for fear of the dire consequences. As a reporter, Asa is determined to brings first hand news of this to the rest of the country but first he has to face Mags. She and Asa clash from the first – not only about the fact that Asa takes her job which she earned and did well at while the men were off fighting in Europe but also how the job is done and about his efforts to change things at the mill.

Mags has seen – up close and personal – the horrific results of Negroes asking for their basic rights and the things due to them. But at least her worry about Asa being naïve about the way things are down South is unfounded. He’s heard of the lynchings and beatings and – after she tells him – about what was done to Ruby to stop her trying to organize a chapter of the NAACP there.

Asa enjoys rattling Mags’s composure a bit though he quickly gets her to see that they’re both on the same side. It might take Mags a little while to calm down about it all but eventually when she learns who Asa really is, she does see the need for him to be there and is determined to help bring his reporting voice back as a way to help the race. But with Winslow and his minions already watching the family based on Ruby’s actions, can they avoid stirring up a hornet’s nest?

There are external conflicts galore to go with the internal ones. But for me the personal ones between Mags and Asa kept repeating too much. One main character changes like a weathervane per chapter. There’s lots of talking between them but still miscommunications abound. It got wearing. Yet on the other hand, I did like how Asa opened Mags’s eyes to new possibilities beyond Winslow and got her to understand her worth. Just as Mags helped Asa to finally understand he’s more than man enough for her despite his war injury.

The danger and ever present menace for Negroes in the South is palpable. They have to think of and consider things that at first Asa doesn’t even register outside of a clinical way. But for the Southerners, it’s a real and present threat for even gathering together outside of worship. I barely breathed the whole time I was reading the final confrontation scene at the train, you made it so real. Even I felt more at ease once they reached Pittsburgh. It was like I could finally relax my tense shoulders and take a deep breath.

Mags was determined to make Paul Winslow pay for what happened to Travis. In the end, I think she makes the correct choice of what to do and right choice for her own soul and well being. She won’t have anything on her conscience about how she acted. Brother Carver and Sister Jane are back. Yay! Religion and spiritual life is very important to this community and the families. Something always seems to happen at that yearly Revival, though.

I agree with Asa that Mag’s amazement at how she’s treated once they’re in PA is sad. But bless her heart at her reception from Asa’s mother Elodie. Poor Mags faces prejudice in both places but she sets Elodie straight soon enough, Church leader though Elodie is. After her sister – and I do admire Ruby’s determination – and Adam do some scheming with Asa, Mags doesn’t stand a chance, herself. Happy sigh at the end.

Though it can be emotionally hard to read, I appreciate the fact that you don’t pull punches with this series. To do so would have watered down the reality of the people who lived during these times and troubles. I see at your website that information on the next “Migrations of the Heart” book is already out and the cover looks amazing. I’ll be waiting to see how the middle Bledsoe sister finds her HEA. B-