I read this book at the Romantic Times convention because you had brought me an ARC or perhaps the ARC was there for someone else and I appropriated it. I can’t recall. I read this throughout the conference, taking it with me to dinner and not going down to drink in the bar because I wanted to finish the story. Since then I’ve read a few reviews excoriating the heroine for being a slut and having a bizarre predilection toward lustiness. As if that’s a bad thing! 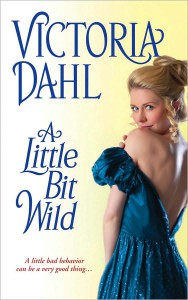 The truth is that Marissa, the heroine, is a wild girl from a wild family. No doubt her brothers have been swiving their way through London and into the countryside so “[a]fter an endless summer of pretending to look for a husband in London, Marissa had thought to treat herself to a night of forbidden pleasure” during a house party at the start of hunting season. Unfortunately for Marissa, her deflowering is not very pleasurable. “She’d found clumsy fumbling, not to mention a bit of discomfort and lots of grunting. Perhaps this was why girls were ordered to keep themselves pure for marriage.”

But the worse part of Marissa’s deflowering is that she is caught by her brother, her cousin, some maids, and is going to be forced to marry a man who “failed to meet even the lowest expectations of performance.” She doesn’t want to marry him, but she has to marry someone because she is totally and irrevocably ruined.

Marissa has no good excuse for her behavior. She didn’t comport herself as a young lady should. She says she was bored, drunk, and curious. At first the stolen kisses and surreptitious caresses seemed exciting but now that she is ruined and has to marry someone, she feels none of the titillation and all of the panic and awfulness of her actions.   But she also chafes at the unfairness of it.   No one would force her brothers to marry.

Family friend, Jude Bertrand, offers himself as the groom. Jude is the recognized bastard of the Duke of Winthrop and as Marissa’s brother points out, has no need to elevate himself by marrying the ruined sister of a baron. Marissa finds Jude to be a brute. She likes pretty boys, their elegant legs, their delicious curls, their soft hands. Jude is big, hard, and looked rough; nothing like a gentleman should look.

Jude challenges Marissa at every juncture, using his superior experience to woo her in a different kind of way, appealing to her wild side.

“So,” Aidan continued in a doubtful tone, “you may have sat across from her at dinner on occasion. That still doesn’t answer my question. Why would you marry her?”

“Marissa?” Jude laughed at the doubt in his friend’s voice.

“Yes, Marissa.” “She hardly seems your type.” Yes, he had a known weakness for rather naughty

women. Jude raised an eyebrow. “Apparently she is exactly my type.”

“Right,” Aidan huffed, then rocked back on his heels to stare at the floor.

Actually, Marissa had caught his attention the first time Jude had seen her. There was that brightness in her green eyes. Not merriment, but . . . transgression. It had always been disorienting, being surrounded by people who seemed to consider her the last bastion of calm and propriety in the York family. Yes, she was graceful and tall and lovely, but could no one else see the way her eyebrows twitched any time she overheard a double entendre? Did no one notice the way her eyes traveled over men’s bodies when she watched them dance?

The girl liked wine and dancing and pretty men. She rode her horse too hard and was constantly slipping free of her shoes to stroll barefoot on the grounds. Wildness lurked just beneath her skin, and Jude could feel it every time he passed too near.

But it’s not just a story of a girl gone bad falling in love with the beast or the beast taming the wild girl. There’s a deeper story here and one that is all about how goodness and decency is measured by society. Jude, for example, is good enough to be friends of Marissa’s brothers. And he’s good enough to be the stand in groom for their ruined sister, but the brothers act as if he can’t understand the concept of honor simply because of his birth.

And Marissa, in falling in love, learns there are depths to her that she had never bothered to perceive before. I remember reading a book once about a violinist. The violinist wanted to achieve first chair but her playing of music was mechanical, without heart. Then she had her heart broken and she understood the depth of the music and was able to translate that when she played. Her heartbreak transformed her. Marissa was a child at the beginning of the story, immaturely flitting about chasing after some elusive pleasure. As she begins to fall for Jude, a maelstrom of confusing emotions cause her to strike out and hurt those around her and she, in turn, comes away wounded. These wounds and her eventual realization of love for Jude helps her to mature, to become less selfish, more understanding.

What is problematic is how could a gently bred girl be allowed so much permissive behavior in this time period? Further, would her brothers really be so understanding about her unwillingness to marry the man who deflowered her? The brothers were understanding to an almost unbelievable degree. At times, I felt that Marissa’s shallowness was overplayed for effect as if she was asking the reader how bad could she be and still be liked? There is no doubt that Marissa is hard to like at times, but that is precisely why I appreciated this book. It wasn’t as if Marissa’s selfishness and immaturity were portrayed as a good thing but rather something from which she needed to grow.

And it’s not as if this book is perfect but it is challenging. It challenges the reader to see things from a slightly different perspective. Can a selfish, immature girl grow to be a woman? Does she deserve love? Is a bastard without honor because of the circumstances of his birth? And is Jude’s insecurities of his own making or because of the attitudes around him? I thought that Jude made the story. His appreciation for Marissa; his struggle to regain his own self confidence; and his just general decency made for an enjoyable read. B-

P.S. Is it just me or does the heroine on the cover look like Tessa Dare?