REVIEW: A Gentleman in the Street by Alisha Rai 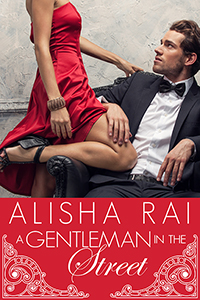 I loved the core of this story about a woman who pushed every provocative button in a somber man’s buttoned up vest. Both Jacob and Akira were real and different characters. Jacob was an author of thriller books who had raised his younger siblings even before the death of his derelict father. Akira is his stepsister, billionaire developer and heiress of the now defunct Mori hotel chain.

For years, sparks have flown between the two of them with Akira playing up the forbidden step sibling connection and Jacob looking at her repressively.  She calls him Brother Jacob to tweak him doubly–marking him as an ascetic and a relative with one nickname. The two are at cross purposes. Akira torments Jacob because she believes he is disgusted by her. Her response to anyone who disapproves of her is to play into that persona to the nth degree. So every party that Jacob attends, Akira makes a point to find a man and drag him off in front of Jacob. Jacob does his part by glaring at them.

But then Akira’s mother dies and she contacts Jacob in search of a special gift that she believes was in her mother’s possession. Mei, Akira’s mother, never liked her daughter and took a gift meant for Akira and hid it away. During the encounter, Akira vamps it up but she makes a mistake. She touches Jacob and it sets off a series of events, much like a Rube Goldberg machine where one action results in another action.

Jacob finds the box and returns it to Akira with a plea. He proposes that they spend ten nights together, getting to know one another. Jacob is abjectly apologetic that Akira believed he disapproved of her or that worse, he thought she was disgusting. It was the exact opposite. Jacob was shamed by his response to Akira and locked into his position as guardian of his younger siblings.

Akira is just as much a prisoner. Her father is the Bruce Jenner type, an aging rich hotelier married to a much younger woman who has several terrible and spoiled children who all appear on a reality TV show. She hates both of her parents, even her dead mother, but longed for their approval. But Akira’s pride drives her to be successful, to be outrageous. Akira is wealthy and successful. She’s beautiful and sexually proactive. But how much of her persona was the result of doing everything she could to piss her mother off? I didn’t know who the true Akira was and I wasn’t sure if Akira knew either. I did find the billionaire heiress to be a refreshing change from all the other billionaire characters appearing in romances.

I always struggle with group sex scenes, not just in this book but in others because there’s a lack of intimacy in it and I like my love stories intimate. I think this is an “It’s not you, it’s me” problem. Group sex seems to be too much like a party so it’s fun but it’s not emotionally close. At times it seems that the two are lost in the moment and other times it came off calculating and a little unemotional.

The non sex scenes were the most interesting. Both felt the hard breath of their despised parents hot on their necks, pushing them toward the adults they’d become. So maybe Akira’s sexual predilections were formed by her rebellion against her mother but so what? Isn’t everyone the result of their environment to some extent?

And it’s always entertaining to see a buttoned up, gruff character unravel. Jacob’s epiphany that it was okay for him to be a sexual creature was delightful. The slightly shaken up billionaire plot line is worth the read despite some of the problems I had with the love scenes. B-