I’ve been waiting for your 62,000 word novel, A Christmas Gone Perfectly Wrong, for a while now, so when I saw it had come out, I snapped it up. 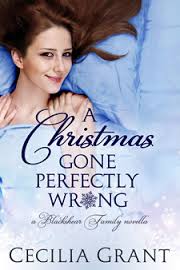 The book is about Andrew Blackshear, the oldest of the Blackshear siblings, three of whose stories appeared in your earlier novels. Andrew’s sister is about to marry, so the Christmas of 1807 may be the last, at least for a while, that he and his siblings will spend together. To mark the occasion, Andrew has decided to get Kitty a special gift—a hunting falcon from Lord Sharp’s mews.

On his way to Lord Sharp’s manor at Mosscroft, Andrew is caught in a rainstorm. Having insisted on taking the reins from his coachman in order to find the place, he is stunned when he comes upon a young lady in the lane. As he halts the carriage, he sees that—even more shocking—her hair is down.

Shock sparked at the nape of his neck, followed by a faint, irrational prickling of shame, and an impulse to avert his eyes.

Not only did the girl wear no hat or bonnet, but her hair—pitch dark masses of it—fell straight down, unbound and ungoverned, for some scandalous number of inches before it disappeared into the collar of her cloak.

Andrew has never seen a woman with her hair down, and he can’t help but feel an attraction, but his shame at being drawn to the girl quickly merges with disapproval of her. Nonetheless, he offers to convey her wherever she is going to keep her out of the pouring rain. The girl declines his offer, but they later meet again, when he discovers that she is Lord Sharp’s daughter, Lucy.

Lucy was raised by her widowed father and has had an unconventional upbringing. Although she understands the same social strictures Andrew observes religiously, to her they are remote concepts, rules she was told about by her governesses and her aunt, but not actually made to follow.

The only young people near her own age whom Lucy has met are her cousins and those men who stop at her father’s estate to purchase hunting birds. Lucy finds Andrew attractive and is charmed by his thoughtful desire to acquire a falcon for his sister so that she’ll have something all her own. Lucy’s father, however, is particular about only giving his birds to those who will know what to do with them and provide them with a good home.

To keep Andrew at the house a little longer, Lucy tells a white lie or two, earning her more of Andrew’s disapproval. But that is nothing to the disapprobation she garners when her plans to arrive at a Christmas house party at her aunt’s home the next day are foiled by her coachman’s injury and she contrives to get Andrew to take her and her maid so she’ll be able to attend after all.

On the journey, everything that can possibly go wrong does, and by the time Andrew and Lucy are stranded near a small village along the way, circumstances force them to pose as man and wife.

Will Andrew find a way to set aside his disapproval of Lucy? Will Lucy come to see that Andrew means well and isn’t entirely lacking in self-awareness? Will they find some Christmas cheer in their holiday and perceive that sometimes, when everything goes wrong, some things go right?

Initially, Andrew comes across as dour and joyless, and I found him hard to relate to, especially since his attraction to Lucy made his disapproval come across as hypocrisy. But this impression eased some when his reasons became evident. His behavior was connected to his mother’s death in childbirth and his feelings of responsibility for his four younger siblings. What drove him was understandable even if his insistent adherence to the rules was not.

Lucy was much easier to understand, sympathetic despite her small lies and manipulations. Her intentions were good, and she’d grown up in isolation, never even attending a party or a ball before, so her desire to be among young people her own age at Christmas for the first time was very easy to grasp.

The novel was painful to read for a good portion – first because Andrew starts out so disapproving of Lucy, and later because so much goes wrong and you write acute misery so well. I wanted more joy amid the misery, and it does finally come at the end, which is absolutely lovely.

The book also had me convinced of Andrew and Lucy’s incompatibility for a while. He cares so much for the rules, and she flouts them so easily. By the end of the book I felt that their relationship could work, that they will complement each other where rules are concerned, but more admiration from each to the other, and from Andrew to Lucy especially, would have helped convince me of that sooner.

The novel’s opening scene reminded me just a tiny bit of one of my favorite Balogh novels, Snow Angel, and indeed A Christmas Gone Perfectly Wrong captures the bittersweetness of the holiday season almost as well as a good Balogh. But it also quickly diverges to its own path,  one that feels fresh and new.

I appreciated the way the novel captures the characters’ youth and inexperience. There’s even a section in which something of a sexual nature happens that I haven’t seen happen in a romance before, and it reminded me a little of my favorite awful, embarrassing sex scene from A Lady Awakened.

The writing is very strong in this book, as in your others. There is a scene in which Lucy takes the falcon to hunt its supper which is so starkly beautiful that I’m sure it will stay in my mind for a long time. I also loved some of the metaphors, like this one:

A glance across the table found Miss Sharp beaming unabashedly in Andrew’s direction. Her pleasure leapt over the plates, the glasses, the cloth, like a presumptuous cat determined to land in his lap.

There was one turn in the storyline that I found hard to credit:

That Lucy thought dismissing her maid to enjoy Christmas with her beau and her family when Lucy herself was traveling alone and unchaperoned with Andrew was a good idea. I thought she would know better, unconventional upbringing or not.

I was also left with a few unanswered questions, none of which were crucial to answer, but still I was curious about them:

What happens when Lucy and Andrew arrive at her aunt’s home? How do they explain themselves?

What about Lucy’s father? Does he ever learn that Lucy didn’t arrive at her aunt’s party on  time?

What happens to the falcon? Does it go to Kitty in the end?

Answering my questions might have taken something away from the heartwarming ending, though, and the book answered some of the questions I had left over from the earlier books in this series, about the Blackshears’ childhoods.

A Christmas Gone Perfectly Wrong is a great depiction of what it feels like when everything that can possibly go awry does, but I felt it needed more joyous moments. The storyline was fresh, moving, and well paced, though, and by the end I liked both of the main characters and could believe they’d make their marriage work. At its current price of less than a dollar, this novel is a bargain. B-.

→ Janine
Previous article: REVIEW: The Teashop on the Corner by Milly Johnson
Next Post: What does it mean to be a “good” reader?