Sapphira Vardon needs five thousand pounds to avoid a cruel marriage and a grim future, and there’s only one path for her. Don a mask and an assumed name, and risk everything to win at the gaming tables. First, though, she has to get through the door. Luckily she knows just whose name to drop.

Corin, Lord Elston, is curious to find out who used his name to gain entrance to Mother Brown’s whorehouse and gaming hell. The enigmatic woman who calls herself Lucia isn’t the sort of female usually found here. Behind her mask and heavy makeup, she’s obviously a respectable woman-‘who plays a devilish hand of cards.

Sapphira is desperate to keep her identity a secret, but Lord Elston’s devastating kisses and touches demand complete surrender. And once he learns the truth, there’s more at stake than guineas. Corin finds himself falling hard for a woman who's poised to run. A woman who’s about to learn that he only plays to win-

Since this is the fourth book in the Triple Countess series, perhaps it should be relabeled as the Countess Quartet? Anyway, on to my thoughts. 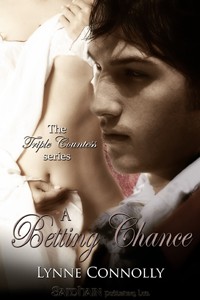 My, my this is a rather a grim look at 18th century fathers where even the kindest of them might easily resort to corporal punishment. And what does it say for society in general that Sapphira accepted the fact that her father whipped her and she still considered him one of the good ones? Times have certainly changed for the better here.

If there’s one thing I always look forward to in your books it’s the examination of another facet of 18th century life. The look into the life of a Cit woman – how she views the hawkers, sellers and constant sounds of London is new and I found it very interesting. Sapphira is a City woman born and raised and doesn’t feel at home anywhere else. I wish there had been a few scenes of Sapphia actually helping her father in his business but the glimpses to a time when a man’s word was his bond shows another way we’ve changed into a society where everything has to be in writing and even then people will try and back out. You also show how important London businesses and merchants are in the world economy.

I used to read a magazine called Colonial Homes that did a spread one time about a restored house in Spitalfields. I kept the pictures of it in mind as I read this book.

I like Sapphira’s pragmatic approach to marriage in that she’s not a girl with her head in the clouds about falling in love. All she wants is comfortable, kind and maybe someone who can have fun. Or even just even tempered and someone she can rub along with. To then be faced with the husband her father has picked for her – gadzooks, what a horror. Would the bizarre Barbers be considered that bizarre by their fellow Londoners? Are they Church of England or one of the newer, fiercely religious sects? Oi what a life to have to deal with them as in-laws.

Clever Sapphira has an escape plan worked out instead of just bolting and running with no destination, money, or papers as so many silly heroines do in romance novels. I did notice that at first she’s going to Coventry but when she actually purchases her ticket, she’s heading to Bristol but later laughs with Corin that she’d be in Coventry now if he hadn’t have come up with the plan that got her free of her father. She even would have been able to explain away any unintentional pregnancy from her “one night of love.” And Corin knows full well the price to Sapphira for losing her virginity – I hate the cavalier heroes who don’t.

The relationship between a romance hero and his family is so often fraught with friction that it’s nice to see how well Corin gets along with his as shown by the fun scenes of Corin and his mother laughing together at the first ball. Corin’s explanation of how he flies under the radar of the marriage mamas is smart and shrewd tactics. Did society men exchange tips? “Ways to Keep Marriage Minded Mamas at Bay:101?” One of my favorite scenes in the book is the slip sliding dance on the overly polished floor. Fact? If not, it’s a brilliant bit of fun and brought to mind hilarious mental images of hooped skirts and coat tails flying. Break dancing 18th century style. Bet the servants laughed their heads off when back downstairs.

I love Mother Brown – a good, honest, earthy business woman who takes no prisoners but also plays fair – even if that’s because just because it’s good for business. It’s also fun to see these polished society men with their coats off and relaxed. I can see how they’d be a little pissed to have a respectable woman invade this place where they go to relax. They have to behave themselves again, dammit. What kind of guidebooks are you referring to that say that Mother Brown’s is one of the best whorehouses in London? There were such things? I thought it more word of mouth.

The contrast between Welby and the other men at gambling tables is the second new and interesting way of showing the fine distinctions in social status in this book. His flashy but poorly made clothes, his slight air of deference to the other men, his ignorance of current affairs all tell even Sapphira that he’s low on the food chain. Would the final accusations against him follow him home and for the rest of his life? I had thought any accusations of cheating would be dealt with immediately then and not excused for any reason. The final lesson to Welby sounds like it would be a sight to behold by those who cottoned on that something was happening. Retribution at the hands of the masters in the art.

I know it’s your favorite plot to have your hero and heroine fall almost instantly in love but not having any, or very little, conflict between the two forces all the conflict outward and is getting repetitious. Plus I’m finding it hard to believe that all the couples in the worlds that you create have this instant, total and complete attraction to each other. Surely somebody needs a little coaxing or time to discover the wonders of their future spouse? But this does make it easier to believe that Sapphira, who starts the book with a deep seated feeling of EMFH, would be so willing to quickly trust Corin.

Love the sex but maybe not quite so many pages devoted to nothing but their total bliss. Even here everything is totally fantastic from the start including almost no pain the first time. The scene at coaching inn was almost too much.

Oh, Corin, typical man who thinks Sapphira knows what he intends and then is astounded she didn’t know his plans for marriage. How might they work out a marriage portion for Sapphira and any future daughters? What is the Mary Blandy case? Is the Belle Sauvage still in existence or did you make this up? Oh dear about last bit. I hoped something like this wouldn’t happen. I hate to say it but sometimes your villains take a turn for the absurd.

It’s fun to see the dynamic duo of Strang and Freddie at cards again. Now, remember, you promised us something for Freddie. Alethea, the minx, seems like she’d be jolly good fun to be around and up for about anything. Will we see more of her?

Well, I hope that Corin and Sapphira throw some marvelous card parties once they start to entertain. And that Sapphira manages to get used to life in the country at whatever Stately Heap Corin eventually inherits. Perhaps he’ll pay the servants to stand outside her windows and pretend to hawk things. B-

→ Jayne
Previous article: Monday Midday Links: How the King James Bible Has Shaped Our Language
Next Post: REVIEW: Nook Color, If you like color this is the device for you