I’m a big fan of Gossip Girl and Pretty Little Liars — the television shows at least. We’re all allowed a few guilty pleasures, right? When HarperCollins offered this book to us at Dear Author and called it Gossip Girl meets Charmed, how could I resist? 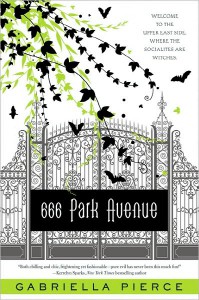 When her parents died in an accident, American-born Jane Boyle went to live with her grandmother in France. Unfortunately, her grandmother was paranoid and overprotective, which led to Jane fleeing to Paris as soon as she became an adult. Now an architect, Jane has finally met the man of her dreams, an American named Malcolm Doran. A whirlwind romance leads to a marriage proposal, and soon Jane is ready to make a new life with him in New York City.

Before she leaves, however, Jane wants to wrap up some loose ends and decides to pay her grandmother one last visit. She never made a proper farewell when she ran away to Paris and now that she’s moving across the ocean, it seems this would be a good time to finally do it.

But when she arrives at the old farmhouse, Jane discovers her grandmother’s dead body — though apparently of natural causes. She has little time for regrets, because she also finds a letter addressed to her. In it, her grandmother drops a bombshell that will change Jane’s life forever: her parents’ deaths were not accidents and she comes from a family of witches. Finally, all those strange occurrences and Jane’s bad luck with technology are finally explained!

Determined to keep her newfound identity as a witch secret, Jane moves into Malcolm’s family home where she has to contend with an even more frightening prospect than people wanting to kill her: her future in-laws. Most specifically, her future mother-in-law, who is used to getting her way. But there are strange things afoot in the Doran family home, all of which lead Jane to realize that maybe there are more witches around than she originally thought.

Anyone who’s ever read a Gossip Girl novel or one of its ilk will know exactly what kind of book this is. In fact, it’s written like a more grown-up version of Gossip Girl. Readers unfamiliar with books put out by packagers might be put off by the slight, breezy writing style but maybe it’d be helpful to think of this book as something akin to chick lit in terms realigning reader expectations. This is not your usual urban fantasy. It’s not even what I’d call your standard contemporary fantasy.

It took me a long time to get into the book. The first half was very meh for me. I don’t know if it’s because the cover copy gave away that Jane’s future mother-in-law is also a witch, but I kept waiting and waiting and waiting (and waiting) for Jane’s great revelation. By the time it happened, my reaction was more, “Finally!” than “Oh, look at this plot twist!” Sometimes I wish cover copies wouldn’t give away things like that.

It also didn’t help that despite her relationship with Malcolm being the reason why she moved to New York, we never see Jane interact with him in any significant way. People expecting a romance of that sort better put those notions right away. The romance is more of a plot point to get Jane to New York than anything else.

But once I hit the midpoint of the novel and Jane learns about her future in-laws, her powers, and the history of witches, I definitely grew more interested. I wish the entire book had been like this. For this reader, stories about people learning their abilities and researching family mysteries are far more engaging than ones in which a woman is ignored by her fiancé and railroaded by her future mother-in-law.

Other readers may feel differently but I liked how the relationship with Malcolm ended up. The reason for that resolution may be too neat and pat for some tastes (including mine) but I didn’t much care for him as a character and found Jane’s interactions with the other potential love interest more interesting. Hopefully, this will not develop into a love triangle in future books because that’s something I could definitely do without and I think what Malcolm did ultimately puts him in DNW territory in terms of potential love interests.

Because the book got such a late start for me, I found myself wanting more when I finished. More about the witch families’ history, more magical battles in the middle of Central park, more everything. I’d be lying if I said I wasn’t looking forward to the next one. That’s the strange alchemy of many an Alloy book production. B-