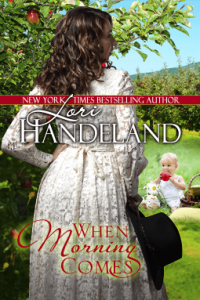 The Civil War is over for Union Major Seth Torrance, although he continues to fight it every night in his dreams. Though his mother expects him to take over the family munitions business, Seth can no longer bear to construct instruments of war. When he receives word that his oldest friend died on the Confederate side of one of the many battles Seth fought, his guilt deepens. He jumps at the chance to travel to Virginia and settle his friend’s affairs.

Upon his arrival, Seth discovers those affairs include not only the family farm but five children, presently being watched over by a neighbor who doesn’t take kindly to Northerners. Though Ella Fontaine is ready to shoot Seth on site, she refrains once she discovers his honorable intentions. To tell the truth, between keeping up the farm, caring for the children, fighting off carpetbaggers and deserters, she needs help–even if it is from a Yankee.

However the children have other ideas and set about getting rid of the Major. But Seth has fought worse battles, and he plans to win this war. To the victor goes the spoils, and Seth wouldn’t mind winning the heart of Ella Fontaine.

I’ve read most all of your “Nightcreatures” books and, years ago, some of your historical novels. It’s that memory of your Western books which made me want to try this one given that it seemed, from the blurb, to have a few things in it which usually set off my alarm bells: war heroes with PTSD plus oodles of cute kids. To my relief, neither thing was too much.

This is a novella so it gets right down to business. Seth Torrance survived the war and he has the mental scars to prove it. His family munitions business is enough to trigger him plus his domineering mother is trying to arrange his life and a wife. When he gets a letter informing him that he is now the guardian of his deceased West Point friend’s infant child, Seth grabs the chance to escape Boston even if it is to northern Virginia.

Ella greets Seth from behind a shotgun but quickly realizes that having a man at the house, and one with money, will be helpful even if he is a Yankee. She’s exhausted trying to keep all of her deceased friend’s children clothed and fed much less keep the farm going. She doesn’t care much for Seth’s sense of duty to his friend but his moral principles and sense of justice which keeps him there will come in handy to pay the bills and deal with rogue men wandering the area.

The thing is, the longer Seth stays, the more he, Ella and the children begin to understand each other and see that the wounds of war were inflicted on both sides. The children – especially the eldest son, twelve year old Cal – find in Seth a man who wants to do the right thing and who might just be the best father they could ever have hoped for.

Ella and Seth have to decide whether or not to act on their mutual attraction and the triggering event makes sense given the lawlessness of the time and place. Not everything is neatly wrapped up and there are long, hard days ahead based on his mother’s reaction to Seth’s Reb fiancée but it does seem like they’ve turned a corner and that things are better “When Morning Comes.” B-