REVIEW: Straight Up by Deirdre Martin 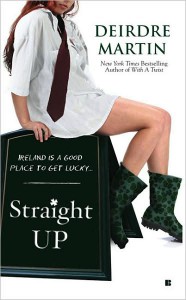 I am really ambivalent about this book. On the one hand, it’s a straight contemporary in an usual setting (Ireland) featuring a very strong heroine. I should love that.   On the other hand, it features my least favorite type of hero. I came away from the story dissatisfied, wishing that Aislinn could have hooked up with someone more worthy of her.

Aislinn McCafferty grew up loving Connor McCarthy and then Connor did her wrong.   Already believing that men weren’t really worth her time (and that Connor was the exception), Connor’s betrayal made her give up men altogether.   The local men are uniformly portrayed as meatheads.

Liam, the hot Yank who is hiding out in Ireland from the Irish mob in New York, tries to practice his wiles on Aislinn who turns him down flat.   Liam tends bar at the local pub Oak.   Rebuffed and then egged on by the locals, Liam lays down a bet that he can be successful with Aislinn where all the others have failed.   Even though Liam realizes this is not a very nice thing (cruel he admits), he doesn’t call it off because his pride is more important than Aislinn.   Lovely.   Everyone does get their comeuppance, though, in a scene I particularly relished.

There was a certain episodic nature of the story. As one conflict was resolved, another would raise itself up kind of partitioning the book into three sections.

In one of the sections, I recognized what the conflict was going to be but didn’t necessarily believe in it. I knew that the hookup between Liam and Aislinn would be impaired by their geographical differences.   Liam loved New York and Aislinn was Baillycraig.   Yet, because we spent nearly the entire book in Bailycraig, I never really was shown Liam’s strong connection to his family or New York. He had one visit from his brother, but we never saw him calling home, writing home. We were told Liam missed NY and his family but I saw little evidence of it.

Aislinn was a great character.   She was devoted with a big heart that had been bruised and broken too many times.   The family dynamics from the family created   by the locals at Oak, the rediscovered ties Aislinn was building with her sister, and the new relationship Liam had found with his extended family in Ireland form the center of the story .   These, more than the romance, were the heart, the laughter, and the tears of the story.

There’s a lot to like in Straight Up but I admit that I never warmed up to Liam who seemed to be all charm and no substance. He brought most of his misfortune down upon his own head. I wasn’t convinced that he was a changed man in the end. Being with Aislinn was easy for him, despite leaving his New York ties behind. In the end, there was almost a too neat conclusion to all the conflicts. B-

This is a mass market from Penguin (Berkley Sensation) and thus one of the Agency 5.   Penguin prices its digital books $1.00 below the mass market price, if the book is in mass market which is my long ass way of saying the book is $6.99 but not at Amazon because Amazon and Penguin are feuding.   Still.

→ Jane
Previous article: REVIEW: Tagged by Mara Purnhagen
Next Post: To Be Read: There’s an App for That