I’ll be straight up and cut to the chase. This is the first anthology I have liked in a . . . . well, I can’t remember the last time I really enjoyed an anthology. Even though there were some quibbles I had with each story, overall, I felt that they were hot, modern and romantic. I can see alot of my contemporaries enjoying this collection. Overall, I would grade the anthology a B-. 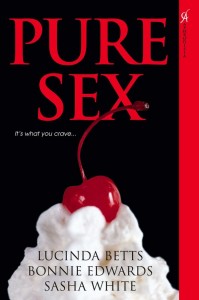 I would probably buy this anthology just for your story. Zoe Lauterborn is a money manager at a big NY Firm. Phillip Kingdom is her closest competitor. Phillip would rather be making love to Zoe than competing and takes advantage of her drunken state one night by bartering his bonus (200K) against her agreement to become his sex slave depending upon who gets the next promotion. Zoe is sure that she will get the promotion because she is the highest earner. Phillips is pretty sure that it will be him because the FIRM, as most firms do, promote the good ol’ boys.

Zoe has always shot down Phillip’s advances because she believes that any fratnerization will show a weakness. Zoe understands that to get ahead in a male dominated business, she has to be better than the men and show no vulnerabilities. This set up was perfect. I knew right away I was going to like the story when Phillip calls Zoe by her last name. Nearly every man I know calls people by their last name or some derivation of the last name.

Your dialogue between Zoe and Phillip was smart and sexy. Not enough of that is done in books these days. The courtship stage is so delicious. Why do we rush over it?

“You have an evil sense of humor, Lauterborn”
“I could’ve taken lessons from you, Kingdom.”
“And you’re a smartass.”
“I thought you liked my ass.”
“I love your ass.”

“It’s–"it’s filled with sex toys,” she whispered to him.
“Shh,” he whispered back. “Don’t let everyone know.”

Where the book falters and why I can’t give you an A is that Peter Phillip is less entertaining when he is serious and tender. I know that sounds shallow of me, but I liked Peter Phillip when he was a funny smart ass not when he was all tender and caring, pouring out sweet nothings to Zoe. I also thought that the heat fizzled out toward the end. The sex wasn’t as hot or as fun as the flirting but it was still a good story and I’ll be looking around your website for another book by you. B for The Bet.

Jared MacKay is a captain of a luxury charter boat who runs day cruises and week long honeymoon cruises. Teri Branton is a NY Production Assistant who was jilted at the altar and decided to come on her honeymoon by herself. Jared and Teri feel the instant crackling electricity between them. They both deny the meaning of this connection. Jared comes to grips with what this means first, and puts forth his every effort to convince Teri that he is the right man for her, forever and ever, amen.

At times, the story was too sweet and part of the conflict resolution was too pat, but overall, it was an easy read. I was curious whether there were other stories of the MacKay men but alas did not find any at the website. C+ for Slow Hand.

My second missive to you in one month. We are getting to be regular correspondents. I enjoyed your voice in Bound and was excited by the opportunity to review another of your stories, even if it was an anthology form. Unfortunately, The Crib, was not well suited to an anthology format.

Lexy is a PI who did skip tracing on the side. She returns to The Crib, a bar owned by Jimmy D and a place where she spent her formative years. Jimmy D is accussed of committing a murder. Lexy knows that Jimmy D is innocent and sets out to prove who the killer is. During her investigation, she meets a mysterious and sexy stranger by the name of Devon. Devon’s purpose in her smal hometown and his presence in The Crib is shrouded in mystery.

The biggest problem I had was that the story did alot of backtracking. Essentially you had the action take place and the action was followed up by an explanation for what had happened and why. It was a little confusing for me to follow. You don’t tell us the heroine’s name for the first three pages. You don’t tell us where the story takes place. It’s only Lexy’s hometown and some place away from Vancouver. (I didn’t realize the setting was Canada until chapter 4).

I don’t know if you got a complaint that your writing had too much backstory dump and edited all the backstory out or if this was just the way you choose to tell the story hoping for a build up of greater suspense. Because I had no rational explanation for some actions of the heroine, I became frustrated. Once you explained the motivation, I nodded my head and understood Lexy better but I got tired of trying to move back and forth from the pages to square up the motivation with the actions. I still like your voice, but I liked it better in Bound. C for The Crib.