This was a greatly anticipated book. Twilight, the prequel, was my 2005 book of the year. New Moon, however delightful it was, seemed to throw all of the faults of Bella in sharp relief. You portrayed her, either intentionally or not, as a selfish user who seemed to only be able to exist with the help of a man in her life. It seemed ironic that her ability to cope with life so closely paralleled her mother’s which Bella, and you, appear to decry. 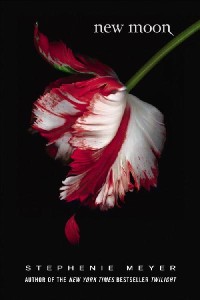 The story opens with Bella celebrating her birthday with the Cullens, a family of vampires. Edward Cullen, a perpetual 17 years of age, is Bella’s soul mate. He is a vampire, though, and while Bella longs to be one, Edward refuses to change her as he believes it would rob her of her soul. During the party, Bella cuts a finger on wrapping paper. The smell of her fresh blood is too much and Edward is forced to shield her from family members. This event causes Edward to believe that his presence does Bella more harm than good. In true romance fashion, Edward paternalistically decides that removal of his presence from Bella’s is the only answer to keeping Bella alive.

Bella is destroyed. She sinks into a deep depression and is only able to rise from it with the help of of Jacob Black, whom Bella terms a good friend. She understands that she is using Jacob but cannot seem to help herself. She revels in the warmth and goodness Jacob exudes. She convinces herself that this is what Jacob wants even knowing that Jacob’s feelings toward her run so much deeper. Jacob Black is young member of a local Native American tribe. I am not giving anything away (at least it was included in the Booklist review) when I say that Jacob Black’s tribe has ties with werewolves. Unlike the fully developed vampire mythos, the world building for the werewolves is sophmoric at best. There is no explanation as to why there are no old werewolves around, how they change (I think it is blood related), whether they have special needs, and so on.

Bella’s climb from the pit is also marked by a desperate recklessness. She engages in increasingly reckless acts because she hears Edward’s voice when she does so. The origin of the voice is unclear. I wasn’t sure whether this part of the book was to depict teenage suicidal ideation, the use of drugs, or was simply an unsure narrator trying to be emotive. It didn’t appear organic to Bella’s previous characterizations. You had portrayed her as steady, a bit emotional, but steady. I couldn’t help but wonder if this part of the plot was an attempt to shoehorn Edward into a story when you knew so many of your fans loved him?

You refer the Romeo and Juliet theme with the idea that Edward and Bella are star crossed lovers and that perhaps in the retelling Romeo should return to Rosalind and Juliet should get on with her life with Paris. Maybe if that was the route you were truly going to take, I wouldn’t feel so disappointed. But the book takes a sharp turn when Edward reappears toward the latter quarter of the book. The ending suspense plot seemed rushed and tacked on, as if someone reminded you that the success of the first book rode on the back of the romance of Edward and Bella. It was really as if there were two books, or two stories, included in New Moon and neither of them were finished.

For all my disappointment, New Moon zips by and leaves me wanting more. It is engaging and unique but flawed. It’s not one that I will be re-reading anytime soon. B- for New Moon.