Alex Romero has a bad habit of allowing his libido interfere with his jobs. He signed on to Bullet catchers, not just for its super rich salary, but for the opportunity to guard “presidents, princes, and the head of Scotland Yard.” His boss, Lucy Sharpe, assigns him to guard the body of a tv news anchor in Miami. Alex recognizes this is both punishment and probation. He resolves to be on his best behavior despite the fact that his principal (the body to be guarded) is well, let me just quote you:

she added, “Don’t let me down, Alex. You know the rules.”
“Jeez, Luce. It’s insulting that you think I’m such a dog that I can’t resist one measly news–“”
She heard the folder flip open, then his long, slow whistle.
“Those are real,” she said without taking her attention from her handheld device. When he didn’t answer, she finally looked at him, seeing a glint in his eyes that was both threatening and amused.
“You’re evil, Lucy. Truly black-hearted and evil.”

The principal is supposed to be Jessica Adams, but Jessica has asked her twin sister, Jazz, to impersonate her for a week. I was pretty skeptical of this at first but you allayed my fears by telling me that Jazz had worked at a newstation for years and could carry off Jess for one week. What I didn’t get was why the BC weren’t more concerned about finding Jessica. That seemed so odd to me and not quite believable, even considering the excuse you gave toward the end of the book. 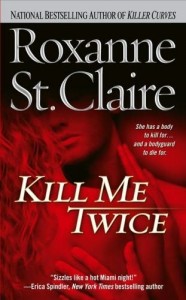 Alex was delightful and I loved the small pyschological exploration of why he was a Bullet Catcher. He’s a Cuban male whose entire life has been trained to protect the women in his life. Jazz chafes at this overbearing attitude and must come to grips with who Alex is in order to completely love him. Love him, love his overbearing attitude. Jazz’ emotional struggle is tied to her inferiority complex. She has always felt less than her sister Jess and wants to make up for it by doing everything in her power to carry out the impersonation. I enjoyed the portrayal of the sisters’ relationship.

Two things kept me from loving this book and both were motivations of the characters. The motivation of the villian was not believable. It wasn’t organic and seemed to be inserted only to make the suspense more palpable (which is wasn’t). Additionally, I despised the actions of one of the other characters and that character did not really make up for the despicable actions. Fortunately that character was not either the hero or heroine and thus didn’t ruin the romance but it diminish my appreciation for the book (and if affected how I read the second in the series). B- for the book.

This book can be purchased for $3.89 at Simonsays.com.