REVIEW: If You Dare by Kresley Cole

When this book first came out, I was really attracted to the cover. It’s very sexy. [note to self. Must remember to tell Maili about this cover]. Yet, I recall telling someone that I was interested in buying it and the response wasn’t positive so I didn’t. Now, after having read and thoroughly enjoyed A Hunger Like No Other, I decided to give If You Dare a second chance. I am glad that I did.

Again, you kept me up reading until 3 am. Like A Hunger Like No Other were alot of things to like and alot of things to dislike.The plot is about an Andorran noblewoman who saves a mercenary Scot, Courtland MacCarrick, only to find out that he was responsible for the jailing of her brother with the evil General Pascal. Pascal wants to be the one general who overthrows the existing Spanish monarchy even though many generals before him has failed. The key, of course, is Annalia Llorrente, a Castillian princess. Annalia goes to offer herself up as trade for her brother’s life. In the escape from Pascal with Court, Annalia becomes marked by the Reszchado’s. The race is on to save her life from Pascal, the Resczchado’s and the curse of the MacCarricks. The curse of the MacCarricks is that anyone who loves them shall die. This was brought home to the brothers MacCarrick when the oldest brother’s fiance dies under mysterious circumstances the night before the wedding. Court believes to some degree that his curse has marked Anna for death. 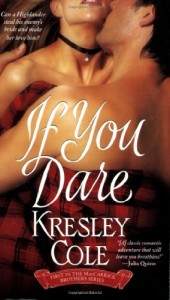 First, I loved that this heroine was not an English miss. She was a Castillian noblewoman who acted like a noblewoman. She liked parties, gowns, and collected Limoges. When a barbaric Scotsman washed up the shore of her Andorran land, she drug him home but refused to undress him because it wasn’t proper. Wow. Propriety from a vriginal young society woman. Unheard of. I like that the relationship between the hero and heroine developed over time even though there was instant lust. What I further liked was that even though consummation was delayed (appropriately so), there was an enormous amount of sexual tension that made smoke arise from the pages. I liked the setting and time period – 1856, Andorra. I liked the action – there was never any lags in the story. You have great pacing. You are also funny or, at least, I find you funny. Maili, the Scot, may not find this story funny. She may stab out her eyes at your doona’s and no’s and whatever else you have gotten wrong. Lucky for you, what I have learned about Scotland came from the noted historical author and researcher, Diana Gabaldon. (kidding, kidding)

What I didn’t like was that the heroine was petulant and spoiled at times. That Court was a overbearing arrogant asshole who could not help himself from constantly baiting Annalia. The whole curse thing was laughable. There are two lines of the curse that unreadable from blood but no one in Court’s family seems to think that the last two lines would be favorable. Maybe it is because I have had the benefit of many many romance novels, but it was pretty apparent that troo love would break the so called Curse. That Court didn’t figure that out until the last chapter shows that he is pretty dense. Your characters also talk like they are from 2006. Maybe even high school, 2006. From “Wine? Not so much” to “You Coach and Six-ed me” Although, I loved the whole Coach and Six concept. A Coach and Six was derived from Annalia’s experience at her prestigious girls’ school. One day, a coach and six would show up. It was a dreaded day for that particular girl because it signaled that her father, brother, guardian has decided to contract some advantageous alliance without the girl’s knowledge or consent, thus changing the course of her life forever.

I decided after the “Wine? Not so much” comment that I would treat this as an alternate reality book, much like Warprize and Warsworn by E. Vaughan. It makes the stabbing of eyes with a rusty pen knife much less likely to happen. B-

→ Jane
Previous article: REVIEW: The Pie and Pastry Bible & The Cake Bible by Rose Berenbaum
Next Post: REVIEW: A Gentleman by Any Other Name by Kasey Michaels