Two of my favorite Harlequin authors published novels with somewhat similar characters, so I thought I’d write a combined review. 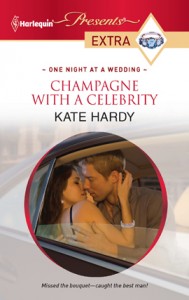 I am a big fan of your Harlequin Presents Extra/Modern Heat novels, and when I saw that you had two linked books set in France I was intrigued. The second in the series, Champagne With A Celebrity, is set in the French countryside and in Grasse, home of perfumes. The hero, Guy, is a master parfumier who has attained fame and fortune by developing a sought-after line of scents. But he has recently lost his sense of smell, and if he cannot find a cure he’ll lose his business, his livelihood, and a major component of his identity. Guy meets the heroine, Amber AKA “Bambi” Wynne, at his brother’s wedding. He is attracted to her because she reminds him of his supermodel ex-wife, but he is also wary of his feelings because his marriage was so unsuccessful. For her part, Amber is the gorgeous, leggy daughter of a movie star who spends her time shoe shopping, charity fundraising, socializing with her friends, and avoiding celebrity magazine publicity and the paparazzi. Guy and Amber have a hot and satisfying one-night stand after the wedding ceremony, and they agree to limit things to that night. But as Amber stays on to sightsee and they spend more time together, they both realize that their attraction may be more than mere lust. Nevertheless, Guy holds back emotionally because he doesn’t want to repeat his mistakes, and he hides his condition from Amber as long as he can.

Amber is presented (and presents herself) as something of a ditz, but the reader quickly realizes that she is more than that. She is a generous friend, an excellent events planner, a good cook, and an indefatigable charity fundraiser. She’s not an intellectual, but she’s far from stupid, and she has a great deal of common sense. When word of Guy’s condition leaks out, she offers him solid advice and useful resources to take control of the situation. Guy is a handsome, charming hero, but he’s also a driven workaholic who can’t imagine life outside his chosen profession. His previous marriage failed because his wife couldn’t cope with his dedication, and he assumes Amber will be the same. Instead, she respects his intelligence and commitment and she looks for ways to help him succeed if a cure can’t be found. Yes, she shops for shoes and texts at the speed of a teenager, but she also takes an intelligent interest in Guy’s business. I really liked the way that you depict their everyday life together in the countryside and in Grasse, and I believed in the HEA of these two very different people. Grade: B 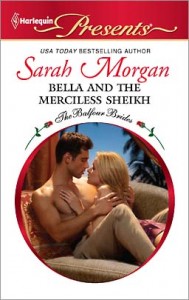 You, Ms. Hardy, and Liz Fielding have shown me that Sheikh books can be intelligent and fun. So when Bella and the Merciless Sheikh showed up, I was happy to read it. Bella’s story is part of the Balfour series, which I have not read, so much of the Balfour context sailed right over my head. But it’s not necessary to know all the backstory in order to understand and enjoy this novel. When we meet Bella, she is miserable in a desert retreat, which is presumably somewhere in the Middle East. She’s been deprived of her mobile phone, her iPod, and various other necessities of a civilized life, like a mirror and hair conditioner. Bella has been exiled to this place because of something that happened in the previous Balfour book, and all she wants is to get out. She steals a horse from a nearby stable and takes off into the desert without a hat. She is rescued in the nick of time by the titular Sheikh, Zafiq, who is on a voluntary and much sought-after weeklong retreat of his own from the stressful responsibilities he shoulders as the ruler of a small country.

Zafiq takes Bella, who unknowingly stole his prize mare, back to his camp and refuses to return her to the retreat or to the city because he wants his week away, dammit! Bella tries to use whatever feminine wiles she has left and is at a loss when they don’t work. Despite their opposite personalities and interests, Zafiq and Bella develop a mutual case of lust-at-first-sight and enjoy each other’s company until Zafiq is forced to return to his responsibilities. When they get back to Al-Rafid Bella surprises Zafiq and herself by begging him to let her stay. She’s not ready to go back to her paparazzi-filled life. Zafiq, who is stunned to find out that she is that Bella Balfour, wants her out of his life, but he agrees to let her stay if she takes on a job and keeps out of trouble. At this point the fairy-tale elements of the book spin it into the stratosphere. I won’t give away the rest of the story, but let’s just say it’s sort of a cross between  Hidalgo and National Velvet. Since the title had already clued me in to the realization that this story was not going to play out as a slice-of-life dramedy, I went with it and had a good time. Grade: B-

I can see why some readers might write off the heroines of these two books as clueless or TSTL, but I think they’d be wrong to do so. Neither Bella nor Amber is dumb, but they’re both so used to being famous for their looks and their partying ways that they have little belief in their own intelligence (and why should they, when no one else gives them credit for any). In their heroes, they find men who see beyond the superficial celebrity to the interesting women they really are, but the heroes don’t turn them into something they’re not. Instead, these two heroines find their own paths to greater confidence in themselves, and I really enjoyed traveling those paths with them. And the heroes were pretty hot too.