There's been some discussion online about the pricing of your newest contemporary, Christmas Eve at Friday Harbor. The book is a hardcover priced at $16.99 (though I myself paid $9.99 for the e-book version at the Sony Store and have recently seen the hardcover on sale at Amazon for as little as $7.58), but it feels closer in length to a novella than to a novel. On my Sony Reader, Christmas Eve at Friday Harbor is just 120 pages long, so I can see why some readers feel that the book is overpriced. 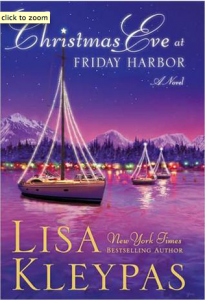 My reasons for wanting to read the book were threefold: I've wanted to try one of your contemporaries for a while; the subject of grief, with which the storyline deals, can be very moving in a romance; and for me at least, the short length of the book meant I could fit reading it in during a busy time of year.

Christmas Eve at Friday Harbor begins with a prologue containing little girl's letter to Santa, in which the child asks for a mom. This may sound curmudgeonly, but I have to admit that when I read little orphan Holly's letter, I started to worry that this book might have more sap than a maple tree.

Happily, things improved in the next chapter, in which we were introduced to Mark Nolan, Holly's uncle. One night, the omniscient narrator tells us, Mark's sister Victoria is killed in a car accident, and Mark, who's been warm but not close to his niece, is thrust into the role of six-year-old Holly's guardian. That role is made even more daunting by the fact that grief has rendered Holly mute, and the child has not talked to Mark since her mother's death.

Victoria had never named Holly's father and Mark's two younger brothers had no role in the child's life. Mark, Victoria, Sam and Alex's parents used the children in their marital battles, so there is little in the way of affection or closeness in the family.

One of my favorite scenes in the book was the conversation in which Mark attempts to persuade Sam to let Mark and Holly move in with him:

"You're kidding, right? Do you know what life is like for single guys with kids? You miss out on all the hot women, because none of them wants to get conned into babysitting, and they don't want to raise someone else's kid. Even if by some miracle of God you manage to get a hot woman, you can't keep her. No spontaneous weekends in Portland or Vancouver, no wild sex, no sleeping late, ever."

"You don't do all that stuff now," Mark pointed out. "You spend all your time in the vineyard."

"The point is, that's my choice. But there's no choice when there's a kid. While your friends are knocking back a beer and watching a game, you're at the grocery store looking for stain fighting liquids and Goldfish crackers."

"No, just the rest of my youth." Sam lowered his head to the table to pound it, then settled for resting it on a forearm.

"How are you defining your youth, Sam? Because from where I'm sitting, your youth jumped the shark a couple years back."

Sam stayed motionless except for the middle finger that shot up from his right hand. "I had plans for my thirties," he said in a muffled voice. "And none of them included kids."

"Neither am I. That's why I need your help." Mark let out a taut sigh. "Sam, when have I ever asked you for anything?"

"Never. But do you have to start now?"

Mark does manage to convince Sam, and as the story picks up again six months later, Mark, Holly, and Sam are all living together in Sam's fixer-upper farmhouse, which is located in the San Juan Islands' Friday Harbor. We next see Mark and Holly through the POV of Maggie, a toy shop owner, and as she learns from her assistant that Holly is Mark's niece and that following her mother's death, the child stopped speaking, Maggie is filled with both attraction to Mark, and compassion for the little girl.

Maggie and Holly bond over a fairy house Maggie made to sell at her toy shop, and with a little encouragement from Maggie, Holly begins to talk. An astonished Mark doesn't know whether to trust Maggie, who encourages the child's imagination and belief in fairies and magic, but he is as drawn to her as she is to him.

But Mark already has a girlfriend, Shelby, and two years after her husband's death from cancer, Maggie does not want the pain another serious relationship could bring, so as they encounter each other in the toy shop and later on a ferry ride to the mainland, Mark and Maggie try to keep the attraction from blossoming into anything more than friendship. Of course, they aren't entirely successful, and then things become complicated further when Holly asks Santa to bring her a new mom.

Christmas Eve at Friday Harbor has enough material for a whole novel packed into its shorter length. The book felt abbreviated and that is probably its biggest shortcoming, but since I approached it expecting more of a novella than a novel, I didn’t feel too deprived.

I loved the lovingly-described San Juan Islands setting, and despite my trepidation after reading the prologue, I thought there was only a little bit more cute kid element than I wanted. In fact, I would have loved to see Mark’s adjustment to being a father, given the family background that he had, as well as Sam’s adjustment to living with Mark and Holly. I wish that transformation hadn’t been glossed over because in many ways it could have been the most compelling part of the story.

While I liked Mark a lot – he was sexy and his love for Holly made him endearing to me — my feelings about Maggie were more complicated. First, I have encountered so many red-headed heroines named Maggie that I'm starting to ask myself why this name is associated strongly to red hair. Second, Maggie was likeable, but in some ways I thought she was a little too nice.

[spoiler]When Mark told Maggie that he broke up with Shelby she said she was sorry to hear that. While that’s the polite thing to say, could she have actually been 100% sorry? I think we were meant to believe this was genuine, but since she was so drawn to Mark I think any real woman in her shoes would have been at least a little bit glad, as well as sorry. I would have liked to see more of that kind of nuance in the story with regard to its triangle aspect.[/spoiler]

Overall though, I loved the triangle aspect of the story because I thought that that, as well as the setting, the coffee Mark made for his coffee business, Sam’s vineyards, Alex and his failed marriage, and the distant and dysfunctional dynamics of their family, gave this story a bit more realism than is often found in the single title contemporaries I read, and that is something that I welcome. Yes, there was some sentimentality too, but the elements I’ve mentioned and the grieving theme helped keep the book from becoming treacly.

I will be interested to read the other Friday Harbor books when they come out in 2012. Alex’s story especially — I thought he was really interesting. Actually even Victoria, Holly’s mother, seemed like an interesting character and I was a bit sorry she died because I would have liked to read about her.

My main complaint is just that this story had so much potential to be an amazing full length novel — the grieving process and the change in the dynamics of Mark’s family could have been explored in more detail and I would have loved that. Despite these concerns, I can confidently say that Christmas Eve at Friday Harbor made me more interested in trying your other contemporaries than I was before. B-.