REVIEW: Agnes and the Hitman by Jennifer Crusie and Bob Mayer

I have to admit that I was afraid to read your new Jennifer Crusie and Bob Mayer collaboration, Agnes and the Hitman. Your first book, Don’t Look Down never got off the ground for me, and Crusie’s other recent collaborative release, The Unfortunate Miss Fortunes, was not my luckiest reading experience of the year. So I dragged my feet on Agnes, started a few times and stalled, wondering if my days of enjoying Crusie’s new books were over. Fortunately for me as a reader, by the time I got serious about Agnes, the book got serious about delivering high impact entertainment through what I can only characterize as a screwball mob romantic comedy “The Godfather” meets “Bringing up Baby” with a little bit of vintage Julia Child thrown in (think about those episodes where she hacks up poultry). It was fast and funny and made me perpetually hungry for breakfast. 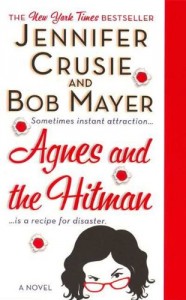 “Cranky Agnes” Crandall, a food writer with a successful book, “Mob Food,” has moved into her dream house, but not yet into the master bedroom she idealistically expects to share with fellow foodie and fiancé, Taylor Beaufort. Although Agnes and Taylor purchased the home together, defraying some of their mortgage by agreeing to cater an important wedding on the property, Agnes is now second-guessing her engagement to a man who spends as little time as possible at the new house and with his fiery fiancé. But Agnes could not have afforded the house without Taylor and without the break in the mortgage, even though the former owner of the house, Brenda Fortunato, has known Agnes since her daughter Lisa Livia brought her home from boarding school when Agnes was 14. After that, Agnes spent every holiday and summer at Savannah’s Two Rivers, and when she finally owns the house, she feels as if she’s come home to family.

Family is a recurring theme in the book, and probably the most prominent. Right away we recognize that Agnes has a knack for assembling a makeshift, albeit somewhat dysfunctional, support system for herself, including surrogate father Joey, local diner owner, subject and cover model for “Mob Food,–? and retired goombah. Joey believes that Agnes and her dog Rhett are in grave danger after a photo of Rhett wearing a gaudy old necklace appears in the local newspaper. The young man who shows up at Two Rivers in the first scene of the book demanding the dog at gunpoint also supplies an early clue confirming Joey’s suspicions. Although neither the reader nor Agnes understands the source or the object of danger, Joey places an immediate distress call to his nephew Shane, the hitman of the book’s title, who hurries home to protect Agnes and Rhett, and becomes the immediate object of lust for the now barely engaged Agnes. Shane arrives at Two Rivers in the middle of a complex assignment, bringing with him a secondary plot involving an assigned hit, a partner/love interest for a secondary character, and, unintentionally, a whole lot of the history that drives the numerous mysteries and conflicts of the novel.

At the most superficial level, Agnes and the Hitman is about one woman’s attempts to carry off a seemingly impossible wedding in order to hold on to the house of her dreams and a life of prosperous normalcy. But if things went according to plan, there would be no fun, especially with all the obstacles in Agnes’s way. So we get mafia grudges and government spooks and family secrets and betrayals big and small. And food, lots of food, especially as it serves to bring people into community around the table and create a sense of cockeyed but emotionally satisfying familial comfort and homecoming. At the center of it all is Agnes, with her tenacious desire for a stable and happy home, some anger management issues, the emotional weight of several failed relationships, a mean way with a frying pan, and a court appointed psychiatrist with whom she has fictitious conversations throughout the novel whenever she feels like she’s going to lose it –” which is often. Someone is sabotaging Agnes’s efforts to throw the perfect wedding for Lisa Livia’s daughter, Agnes’s fiancé betrays her, and people keep breaking into her house to steal her dog. In the midst of the mayhem, Shane becomes Agnes’s constant, his elemental masculinity an irresistible lure. As cool as Agnes is hotheaded, as introverted as Agnes is gregarious, and as deliberate at Agnes is impulsive, Shane represents the quiet that Hurricane Agnes has never really known. Shane has hit his own life crisis, and cannot really afford a distraction from his delicate assignment, but Agnes’s lively energy, her independent and intelligent quirkiness, make her impossible for Shane to resist.

It is impossible to talk much about the plot of Agnes and the Hitman without revealing some of the coincidences, intersections, and revelations that make the book so much fun. Most of the action takes place around the impending wedding and the various family members and friends who arrive on the scene to amp up the tension and the comedy. The mob plot runs parallel to the wedding plot, crossing over at critical points, adding a sort of madcap gruesomeness to the whole shebang and a great opportunity for Mayer’s experience with action-adventure stories to merge with Crusie’s way with romantic comedy. And unlike Don’t Look Down, which read to me like an uncomfortable writing round robin exercise, Agnes and the Hitman is a more integrated, better written, more tightly plotted, and much more satisfying book. Although there are still places where I felt the command of one authorial voice, I didn’t feel that either threw the book off-balance. Rather, I was happy just to read along, not completely convinced of the romantic elements of the book but entertained enough not to care all that much at the time.

In regard to the romance, I warn those who are seeking a more traditional relationship development to suspend those expectations if you want the greatest enjoyment out of the book. The way Shane and Agnes begin their relationship is anything but conventional, and Agnes’s character is not that of an emotionally stable good girl. Her strengths as a character aren’t fully realized until she comes to terms with all her pent up anger, which happens well into the novel and in a way that is both unconventional and delicious. The relationship Agnes shares with Shane, although obvious in the setup of the book and in the way that opposites so often attract, seems based primarily on the fact that Agnes is drawn to the fact that Shane is “Big. Broad. Dark. Strong. Handsome if you liked thugs. Looked like Joey. And he was here to keep her safe.–? The combination of his dark burliness and promise of safety really seems to drive a lot of the connection Agnes has to Shane, and honestly, it seems that Shane doesn’t need much more than Agnes’s “round everywhere–? body and “pattable–? behind to keep him interested. Considering the speed at which these two characters seem willing to commit, I could have done with much stronger emotional development of their relationship.

I didn’t need the book to be full-out Romance; in fact, I think that part of the novel’s strength is its freedom from strict generic conventions. But even on the book’s own terms the romantic relationship between Shane and Agnes comes across to me as shallow, which is both ironic and a bit of a disappointment considering that Agnes had made so many bad choices about men. Part of the problem for me is that Shane remains somewhat remote as a character, like his movie character alter ego, despite the fact that Crusie and Mayer’s book does not end with the same level of ambiguity as George Stevens’s film. There are some significant revelations in this book of mysteries that affect Shane — that would affect anyone in a deep way –” but they are somewhat glossed over. That Agnes is not primarily a Romance kept my disappointment over the relationship development from being fatal, especially because the rapid pacing of the novel kept me turning the pages and staved off any quibbles, questions, and frustrations until after I closed the book and began to contemplate my review. Overall, I have to recommend Agnes and the Hitman as a manically entertaining romp, neither too frothy nor too heavy, steeped in quirky characters, lots of family angst, and emotionally satisfying resolutions. Had I gotten Agnes’s recipe for pecan sour cream buttermilk pancakes, it would have been even more satisfying. But even though I could only enjoy them vicariously, I still have to give Agnes a B+.