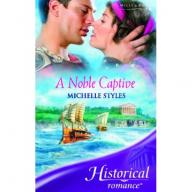 Thanks again for sending me an advanced copy of “A Noble Captive.” I agree with you that the cover is great. Not that “A Gladiator’s Honor” was bad, well except for the wrong color hair for the hero! Have you ever noticed the difference in the texture of Mills and Boon books vs US published Harlequins? Strange….anyway, back to the review.

Marcus Livius Tullio and his men have no idea where the pirates have taken them but Marcus knows he needs to get his men out of the stinking trireme where they’re being held captive before any more of them die. The junior tribune seizes an opportunity when the island’s gold-masked sybil comes to inspect the tribute goods also taken by the pirates, though those swine disguise their actions by saying they rescued the Romans during a storm at sea. After racking his brains to remember the correct words of supplication to invoke the hospitality of the goddess Kybele, Marcus maneuvers the sybil into offering the sanctuary of the goddess’s Temple while they all wait for the ransom money to arrive from Rome.

While Marcus is pleased with himself at getting his men medical care and better conditions, Helena is furious. Lately some of the pirates have been pushing to gain greater control over the sybil. His actions have given the pirates more reasons to attempt to insinuate themselves into the power structure of the Temple. If she’s not careful, they’ll completely take over and the Temple will lose its independence to them. Worst still, if the presence of the Roman soldiers brings the island to the closer attention of Rome, it could cause the greedy Republic make its own move on them and everyone knows what happens when Rome shows an interest in something. Helena knows she’s walking a tightrope between the two sides and is further burdened by something she can’t allow either side to know: the real sybil, her aunt, is dangerously ill and Helena had to take her place to inspect the pirates’ tribute. Can Helena keep her head clear and her heart unentangled with the tribune’s? And will Marcus be able to save his men and his own heart?

Some of my main problems with your first book have been ironed out in this one. The historical information is much more smoothly integrated into the flow of the writing and the heroine shows quite a bit more backbone without becoming a modern woman in a chiton. Marcus is a believable hero. He makes mistakes in his relationship with Helena but learns from them. This is also the type of historical novel I love, one that takes a little known incident and turns it into a story. These are the books that make me immediately want to know more and end up providing hours of googling inspiration. I like the way you ended the novel. A price had to be paid for the HEA and this (Marcus’s army career) made sense and fit with the historical event.

One thing I was sorry to see were more misunderstandings between hero and heroine. You did give some plausible reasons for most of them and both sides quickly admitted their mistaken beliefs but this is one frequent Romance plot device I’d be glad to see the end of. I also felt that you tended to reiterate the basic plot conflicts a bit in the early going but since I’m finding the same thing in a book I’m currently reading which was written by a long established author, maybe I’m just becoming a crotchety and impatient reader. ;)

I hope this current trend in using ancient settings for novels continues. After reading your workshop notes on how to make historical worlds come alive in novels, I’m looking forward to what you have in store for us next. B for “A Noble Captive.”

Note: this is a Jan ’07 paperback release in the UK. So far there is no publishing date for the US/Canada. Boo-hiss Mills and Boon/Harlequin.