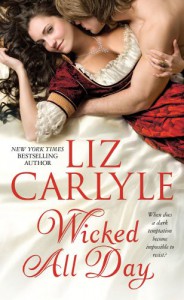 I have read you since your debut in 1999 with My False Heart. My False Heart remains high of my favorite romances of all time and it is the book against which I measure all of your other titles. The story was so fresh at the time. The heroine, Evie Artevalde, was not a virgin. The hero, Eliot, the Marquess of Rannoch, was a surly, disreputable lord. He lies to her. She turns him off but ultimately they have a memorable happy ever after. Wicked All Day tells the story of of Eliot’s illegitimate daughter, ZoÃ«. ZoÃ«’s mother was an opera dancer whom Eliot paid off. Eliott was not a good father. He had good intentions, but up until his marriage to Evie, he had left ZoÃ« in the hands of a succession of governesses.

ZoÃ« was incredibly spoiled because Eliott didn’t know how to be a good parent. His response to a governness that treated ZoÃ« badly was to cast her out without a reference and order his servants to make sure that ZoÃ« never had another unhappy day. ZoÃ« grew up to be a flighty young woman who seemed to delight in breaking hearts and living on the edge of ruin (ironically, not unlike her father). ZoÃ« snubs society’s conventions as much as she is able because they refuse to accept her. She’s a bastard, an illegitimate and despite the fact that she is beautiful and moneyed, the only offers she can get is from roues and ne’er do wells.

Rannoch, at his wits end and not wanting to see his daughter an outcast, has laid down an ultimatum to either marry a certain gentleman or to be banished to Scotland. This drives ZoÃ« to engage in a reckless and selfish act with her best friend Robin, Lord Rowland. Robin and ZoÃ« have been friends and instigators of each other’s bad behavior for years. While Robin usually doesn’t think of ZoÃ« in a sexual manner, one night at a ball with a little too much liquor and the temptation of a beautiful woman begging him for physical attention, he can’t seem to resist.

Robin and ZoÃ« are caught in a compromising position by Robin’s older brother, Stuart, the Marquess of Mercer, and his recently cast off mistress who is looking to cause Mercer grief. Robin and ZoÃ« are thus affianced making everyone miserable. Robin realizes that he loves his mistress and begins a downward emotional spiral resulting in drinking, whoring, and arguments with ZoÃ«. Stuart realizes that his constant animosity toward ZoÃ« was tied up with his repressed sexual longing for her and his resentment of Robin and ZoÃ«’s closeness. His emotional anxiety is worsened by the recognition that he now lusts after his brother’s wife to be.

And ZoÃ«? She has to face up to her own demons. Her recklessness and selfish act has resulted in making everyone she loves miserable from her best friend, Robin, to her father, to Stuart, and everyone in their interrelated families.

"Robin, it isn’t just Mrs. Wilfred," she whispered. ZoÃ« gathered her reins in one hand, and tried to reach for him, but he nudged away. "Please, Robin. Don’t shut me out. We are best friends."

He shook his head, and turned his face away, leaving ZoÃ« with the most dreadful suspicion he was blinking back tears. "Listen, ZoÃ«," he rasped when he turned back around, "I don’t care if you were with my brother or not. And this bruise"-‘Here, he rammed a finger under his shirt collar and yanked it savagely down-‘"for this you can thank Jemima. She got a bit out of hand last night. Not that I took any pleasure in it."

The bruise, ZoÃ« realized, was just a small passion mark. "Robin, I don’t care to hear this," she murmured, cutting an uneasy glance at Jonet.

"Don’t you?" His eyes were dark with pain, his voice rising, causing heads to turn. "Well, you can listen anyway. To say her talents were wasted is an understatement of epic proportion. That’s why I came home early. I thought, you see, that I owed my bride-to-be an apology."

What I found so interesting about these characters is that they aren’t so driven by their bad parenting but the constructs of society. In other words, would ZoÃ« have been so capricious and reckless if she hadn’t been stigmatized as not worthy. Would Stuart, who was well loved by his mother, have been more apt to go after his heart’s desire if he wasn’t slotted into the role as older, responsible brother? Would Robin have offered for his mistress if he hadn’t, at some point, thought she wasn’t wife material because of her lower station and her widowhood?

All three have to breakthrough the expectations set upon them. For Stuart, it means abandoning his rigid principles. For ZoÃ«, it is fulfilling obligations. For Robin, it’s coming to grips with responsibility.

There is no suspense plot. This is wholly driven by the characters and the society rules of the time period provide much of the conflict. ZoÃ«’s reputation is still hanging by a thread and Stuart’s former mistress could bring ruin upon her even if Stuart married ZoÃ«.

Family has always played an important role in Carlyle books and this one is no different. The familial interactions of ZoÃ«’s family with Stuart’s provide real drama from the anger of Eliot toward Robin and toward himself to the dismay of Jonet, Robin and Stuart’s mother, over her worry that ZoÃ« is marrying the wrong son.

One thing I loved was when both characters, independently, started changing their perceptions about each other and how what irritated them the most about the other was some of their greatest traits.     It’s a beautifully written and crafted romance and one that I know I’ll revisit again and again. A-