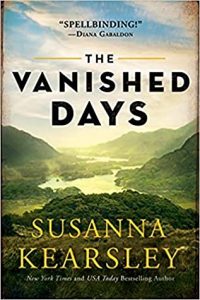 A new book from you is always a treat for me. My favourite (of many favourites from you) is The Winter Sea, which is “Slains 1”. When I re-read The Winter Sea I’m always forced (happily) because reasons to then read at least some of The Firebird (“Slains 2”). In fact, there’s a glorious ‘Kearsley loop’ I have often found myself in and The Vanished Days (“Slains 3”) hooked me right back into it. It’s a pretty fantastic place to be actually.

I’m sure The Vanished Days can be read as a stand alone. Much of it pre-dates The Winter Sea (some of it is concurrent) and all of it is before The Firebird. But because I knew who some of the characters were, my own reading experience was informed by it and by my feelings about certain of the characters I’d already met (in particular, Colonel Graeme – who was, in this book, a captain). The Graemes and the Morays and their real life histories are threaded through with the fictional characters you create and it’s so seamless it feels like it could all be real.

There are also echoes of The Firebird in The Vanished Days  in that there is young girl, brave and alone who is the centre of the story and it’s just an arrow to my heart some of the things she has to deal with. There’s always a Graeme to try to help though and that made said heart very squishy.

What is different about The Vanished Days to your other books is the narrator; rather than the story being told from the main female character, here the lead POV is from a man. And, for a lot of the book we don’t really know what his full role is to be. Is he merely the storyteller? Is he the romantic lead? How closely involved is he to the tale he is relating? In any event, after spending so much time with him it was impossible not to care about him.

The book begins with Adam Williamson looking back on a particular part of his life and putting pen to paper to write it all down.

I was a younger man when I first met her. I should tell you this in fairness, not because the years have dulled my recollection of that moment, for in truth I could still lead you to the spot where I was standing when she looked in my direction. I’ve forgotten many things. That is not one of them. I’m telling you because even the wisest man, when young, is ruled by other things than wisdom when he meets with such a woman. And when I met Lily Aitcheson, I knew I was in trouble.

There is a dual timeline (but no paranormal element) – some of the story is from 1683 or thereabouts and some is in 1707, the story moving from one period to the other and ultimately filling in the gaps in between the two timelines, apart from the very beginning and the end which are set when Adam is writing his story down.

In 1707 Adam Williamson is tasked to assist in the investigation of whether Lily Aitcheson is the widow of James Graeme, who died in the Darien expedition, Scotland’s tragic foray into creating their own colony in South America. If Lily is Jamie’s widow, she’s entitled to some compensation. But there are no witnesses alive to attest to the wedding and some irregularities in what records exist and so Adam is to lead an enquiry to make a recommendation to the Commissioners of the Equivalent, assisted by Lord Grange’s clerk, a Mr. Gilroy. Adam is not too sure about Gilroy but he’s instantly taken with Lily. Which, in the circumstances, makes things extra tricky.

From there, he traces Lily’s life and her intersection with James Graeme and by the end, the truth is revealed.

It is interwoven with the true history of Darien, the Equivalent and parts of  a Jacobite rebellion. The author’s note at the end reinforces just how much meticulous research you did but I already knew from your previous books that you know your history.

There are parts of the story which are told from Adam’s first person perspective, including sections where he directly addresses the reader, and others which are in the third person; things Adam knows from being told by others. He intersperses these parts in chronological order for the most part rather than strictly when he became aware of them –

She did not tell it to us in that way. She told it haltingly. We asked her questions, and she answered, and from there the story took its shape. Some details I did not learn till long afterward, but since my purpose is to write things down for you in all their fullness I have woven everything in place as best I can, that you may have the clearest picture.
I can promise I’ve invented not a word of any part of this tale that belongs to her—that everything is as she told it, or as it was called to memory by those who were there and lived it with her.
That much I assure you, on my honor.
Whether she was truthful in the telling of it…well, that can’t be laid to my account.
And that was, after all, the very thing that I was being asked to judge.

In my head as I was reading it was like when you watch a movie and someone is telling a story and then the movie morphs into the events as they happened and the narrator’s voice fades as the tale continues to spool out and you forget the narrator altogether. Even though there is an awareness that the story is filtered by and through Adam, the sections in the third person feel external to him when reading. I’m not sure that makes much sense but if it sounds weird here, I can assure readers it does feel organic in the book.

It’s difficult to talk more about the plot without giving things away which are best read  as they are revealed on the page. Even though Adam is the narrator of the story, the tale is mostly about Lily and she shines through the entire novel – she is the heart and soul of it. Of course, Adam has immediately (or thereabouts) tumbled into love with her so everything he writes is through that lens but I couldn’t help but agree with him. Lily broke my heart but it was mended by her eventual happiness.

There are some twists and turns and I admit there were times I was worried about just what kind of story this was going to be and where it would all end. Was it even a romance? But I reminded myself that you understand the implicit promise in the genre and you wouldn’t let me down so I resisted the temptation skip to the end and peek. I was right to do so – for more than one reason.

Apart from The Winter Sea and The Firebird, there are also smaller links to Bellewether, Mariana and so many others of your books too. I’m sure I didn’t catch even half of them on my first read. If I were forced to choose one book to have with me if I were in a Castaway-type situation (-well, I wouldn’t be – I would die – I have terrible survival skills-), I’d cheat and choose all of your books. The thing is there are so many delightful Easter eggs within them and they connect with each other in unexpected ways. It then lends something extra to the previous books and then I’m in the ‘Kearsley loop’ again. I have re-read so many of your books so many times (and I’m not a big re-reader generally) but there is always something new to appreciate in them. I referenced it in a post earlier this year here which focused on The Rose Garden but it holds true for pretty much all of your books.

I did in fact immediately re-read The Winter Sea after I finished The Vanished Days. And the only reason I didn’t read all of The Firebird after that was because I had review commitments (but I did read the Captain Jamieson bits – I had to do at least that.) I was sorely tempted to then re-read Bellewether as well but I didn’t have time – soon though. The ‘Kearsley loop’ is a true thing is what I’m saying. Readers beware!

The Vanished Days is another which will be a re-reading must for me (I can hardly wait for the audiobook). There are reasons I won’t go into here because of spoilers but it will definitely be an entirely different reading experience the second time around and I am convinced there will be things to find not just then, but in many future readings to come. Because there always is.

→ Kaetrin
Previous article: REVIEW: How to Examine a Wolverine by Philipp Schott
Next Post: REVIEW: The Beatryce Prophecy by Kate DiCamillo, illustrated by Sophie Blackall