REVIEW: The King of Attolia by Megan Whalen Turner 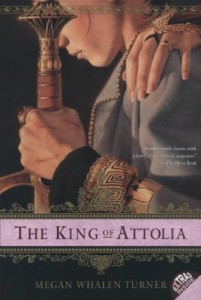 Last month Jane, Jia and I embarked on Keishon’s TBR challenge 2009. This time Keishon’s suggestion is a book that AAR has rated as a DIK (Desert Isle Keeper). While scanning through AAR’s list of DIK reviews, I was excited to unearth Rike’s review of your Thief Series.

But other reviewing commitments delayed my reading it and then my life got so busy that I barely had time to read a thing. The consequence was that The King of Attolia has languished on my bookshelf far too long. Happily, the TBR challenge was the excuse I needed to pick it up and finish this set of reviews.

It is impossible to discuss the third book without giving MASSIVE SPOILERS for the first two. Readers who haven’t read The Thief or The Queen of Attolia and want to avoid spoilers for these books should read no further.

The three books are set in a fantastical world based on the Mediterranean (Greece in particular) and deal with the three kingdoms of Sounis, Eddis and Attolia. This third book focuses mostly on Attolia.

As The King of Attolia opens, Eugenides, master thief of the kingdom of Eddis, has married the Queen of Attolia, who once cut off his hand, and in doing so, become Attolia’s King. But most of the Attolian court and the queen’s guard have nothing but contempt for Eugenides.

The Attolian custom is that a new bride goes to her husband’s bedroom on their wedding night, but in Eddis the groom is the one to visit his wife. The corridor between the king and queen’s apartments is full of attendants, so it is widely known that neither Attolia (as the queen is called) nor her new husband has traversed that distance.

Eugenides lacks the demeanor of a king, and he seems to most Attolians to be a childish fool. Among those who despise the new king is Costis, a member of the queen’s guard. One day, in a moment of rage he can’t even understand himself, Costis hits Eugenides in the mouth, despite his being king and having only one hand.

Costis fully expects to be tortured and then hanged for treason. But he is unexpectedly pardoned by the king, who comes to visit him in his rooms. Costis is then called to attend on the king. While spending time in Eugenides’ vicinity, Costis observes the king’s attendants and the palace guard making a fool of the king with little tricks, like staining his clothing, and making jokes at his expense.

Yet even as he tells himself how little respect he has for the king, Costis begins to hate him less. The more time he spends in the king’s company, the more puzzled Costis grows at the king’s relationship with the queen. He finds himself torn between his loyalty to the men he serves with, who despise the king, his fealty to the queen, whom he reveres, and what his own sense of honor demands of him.

Costis senses there are machinations in the palace, plots against the king, but is uncertain what, if anything, he should do about it, and whether there may be, after all, a point in protecting Attolia’s King.

The King of Attolia is a thrilling book, especially to anyone who has read the previous two books in the series.

Most, though not all, of the scenes are written from the viewpoint of Costis, and he is a very likable character — honest, loyal, brave, and above all, honorable. His dilemmas where the king and the other palace power players are concerned are understandable and involving.

Readers of The Thief and The Queen of Attolia know that Eugenides is nobody’s fool, even when Costis doesn’t realize it, so it’s delightful to see the thief king’s cleverness at work as he himself fools many of Attolia’s nobles. The plot takes unexpected twists but Eugenides is always two steps ahead of everyone but his queen.

The relationship between Eugenides and the older (and even taller!) Attolia is incredibly romantic. Here, as elsewhere in Eugenides’ life, things aren’t what they appear to be, and Attolia, who has a reputation for ruthlessness and whose very name instills fear in so many, has a soft spot where her new husband is concerned. Theirs is a relationship between two highly intelligent people who are sometimes tortured by their past and who must outthink their many enemies and rivals.

But the most thrilling thing about the book is the character of Eugenides. Readers who have been following his adventures since The Thief have the chance to see him grow from a daring boy into a haunted man and now into a worthy leader for the kingdom of Attolia.

There is so much complexity in your portrayal of Eugenides that I’m in awe of the way you have bound maturity and boyishness, ruthlessness and vulnerability, cleverness and devotion, into this one character. It is this portrayal that makes The King of Attolia one of the most engrossing and satisfying young adult books I have ever read. 2010 and book four can’t come soon enough for me. A-/A.

This book can be purchased in paperback from Amazon. No ebook format.

→ Janine
Previous article: Even Ian McEwan Has Critique Partners
Next Post: REVIEW: Not Without Her Family by Beth Andrews