REVIEW: The House of Sundering Flames (Dominion of the Fallen #3) by Aliette de Bodard 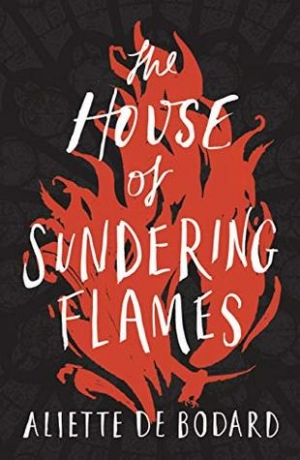 The multi-award-winning author of The House of Shattered Wings and The House of Binding Thorns concludes her Dominion of the Fallen saga, set in a Paris devastated by a magical war.

The great magical Houses of Paris – headed by Fallen angels and magicians – were, however temporarily, at peace with each other. Until House Harrier was levelled by a powerful explosion. Now that peace has become chaos, tearing apart old alliances and setting off a race in which each House hoards magic and resources to protect itself against another such blast.

Thuan, the Dragon head of the divided House Hawthorn, is still consolidating his power when war comes to his doorstep. Aurore – exiled from and almost beaten to death by House Harrier – sees her moment to seek power in order to protect her family, even if she must venture back to her destroyed former home to get it. And Emmanuelle finds herself alone in the middle of it all, driven to protect others, trying to piece together what has happened, and hoping – eventually – to make sense of it all.

None of them know what destroyed House Harrier, though . . . and when they do uncover that fiery, destructive magic then divided Houses, old enemies and estranged friends will all have to make a decision: stand together, or burn alone .

This conclusion to your “Dominion of the Fallen” trilogy was brilliant. The end. Oh I do need to write a little more I suppose.  This book is also an Exhibit A of how to end a trilogy.  Do not do not start reading here, go back to Book 1, because really they are three parts of the same story, not separate stories in any way.  Every plotline was completed, every character arc was completed .  I thought it did not preclude further stories in this universe if the author so chooses, but there was *no sequel baiting in any way, shape or form*, nothing left hanging to annoy a reader like me.

As the blurb states, Thuan (one of my favorite if not the favorite characters in this trilogy), dragon prince who married Head of the House Hawthorn Asmodeus after some explosive events in the second book has the war suddenly come to his door step. In the beginning of the book Thuan is having a relatively calm day, but such a calm day very quickly transforms into the possible beginning of another war between Houses.

“His other mistake, of course, had been to use his one hour of leisure in the day to be nice to overwhelmed parents. “Unka Thuan, Unka Thuan! She’s stolen my doll!” Ai Nhi had drawn herself up to the full and rather limited height of a five-year-old and pointed an accusatory finger at Thuan’s niece Camille. Her shape wavered between human and dragon, with the shadow of antlers above her pigtails, outlined in the bluish light of khi water. “Give it back, or I’ll tell Auntie Ly!””

“The khi currents of water, faint lines of blue light, seemed undisturbed. They curled, lazily, along the wide paths of pockmarked gravel, around the wide trees whose trunks were flecked with fungus, and stopped at the water’s edge. Nothing wrong. Still nothing he could put his finger on. And yet…”

“He shifted into his dragon shape, as easily as slipping on the tailored clothes Asmodeus kept pressing on him. He scooped up both children, ignoring their protestations—the wriggling, screaming Camille, Ai Nhi saying she was all grown-up and too old to be carried, trying to grab her doll from Camille on Thuan’s other side—and started flying towards his office. The pressure in the air was becoming unbearable; that dreadful, unnerving calm before the storm, slowly spinning itself together.
The plume of smoke from the burning House Harrier now cast a long shadow across the lawn, the trembling, billowing finger of some malevolent deity lightly resting on a wound. There was no khi water left in the air at all—Thuan felt he was swimming upriver through tar, caught in sticky air that only slowed him down. The river wavered in front of him, patches of oily sheen distorting into vague, unrecognizable shapes. An illusory safety: the dragon kingdom would not help him, would not shelter him, would not save him.”

The explosion in the House Harrier affects other Houses deeply and brings a lot of Houses to the brink of dying – the magic that caused the explosion is only too happy to start causing destruction everywhere . I won’t share the reasons why, because the reasons are very spoilerish.  All the important characters from the previous books are forced to deal with death and destruction – death and destruction that can only become worse with every minute/hour/day.

The horrible things that are happening are influencing the relationships as well.  I have to admit that while I found all main characters to be very interesting, the romantic elements in the story only interested me when Thuan and Asmodeus were on page. While after reading the second book I thought they had lots of chemistry and connection, it was clear that they still have tons to learn about each other and negotiate with each other where House is concerned and they do it in this book!  Of course these guys (dragon and fallen angel) are just part of ensemble cast, and romance is not the main story of the book at all, but I was ridiculously pleased every time they appeared on page together.

““You make that difficult.” “Why?” “Don’t tell me you don’t know,” Thuan said. “You despise weakness in everyone, and in yourself most of all. How…? How am I meant to keep your regard, if I abase myself before you?” He didn’t even see Asmodeus move. His lips were on Thuan’s—the smell of citrus and bergamot in his mouth—and Asmodeus’s hand was stroking, gently, slowly, the nape of his neck.

“We do run the House.” Asmodeus’s voice was a whisper on Thuan’s lips, sending a warmth that spread to his entire face and made his breathing absurdly constricted. “Jointly. Of course you ask. You always ask. Otherwise I’ll be… most disappointed.” He bent down, and kissed Thuan again, running his fingers on the soft, quivering flesh at the base of Thuan’s dragon antlers. “Now tell me what you need.””

As an aside, as  far as I was concerned I loved how in the second book we occasionally got to observe dragons’ shimmering features of their dragon form, but I wanted to see more and I was pleased that the author delivered and not just Thuan, but little girl in the previous excerpt switching forms and a little bit from other secondary characters.

I was especially disappointed in Philippe and Isabelle – not in them as characters , but after how much I rooted for them to be together in book one and how much I hoped that they actually could be together, in this book I didn’t see any romantic chemistry between them.  Don’t get me wrong, they *are* together in a sense that they are staying in close proximity to each other and I certainly didn’t expect anything sexual from them when they were fighting trying to save their community from destruction, but Thuan and Asmodeus were in the middle of the war too and I felt their chemistry.  I am not even lowering my grade for my disappointment, because I fully understand that this is not a Romance book but wanted to share how I felt.

The magic in this book was fascinating, I loved it, especially the khi elements as parts of the magic and how it all works and how contrary to the Magic of fallen everyone could learn how to do it.

The main plot is fast moving and at times surprising, but overall ending made perfect sense and for many characters much happier than I was worried it would be.

→ Sirius
Previous article: REVIEW: I Love You More than the Smell of Swamp Gas by Kevan Atteberry
Next Post: REVIEW: King & Queen of the Poker Game (King & Queen series Book 4) by Diane Michaels