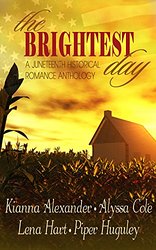 The Brightest Day: A Juneteenth Historical Romance Anthology, with a foreword by the inimitable Beverly Jenkins, brings you four novellas highlighting love, light, and hope set over a period of history that’s often left in the shadows.

I had been eyeing this upcoming anthology for months but still almost let it slip up on me. Luckily for me I snapped to attention when going over my Amazon wish list and got with the program in time to have a review ready for today.

Amazing Grace, by Lena Hart:
It’s the year 1866—the Civil War is over and slavery has ended. Life for 18-year-old Gracie Shaw takes an unexpected turn when she is “encouraged” to marry a man sight-unseen. Boarded on a train headed West—to lawless territory—she is faced with misfortune at every turn and must accept the help of former Confederate soldier, Logan Finley, while denying herself the one thing she wants most. Him.

Though most of this story takes place after the end of the war, the prolog shows the horrors of what slaves endured and why it’s so important to Gracie to be able to make her own decisions about her life. A former soldier heading west and a “mail order” bride going to an arranged marriage is the perfect set up for this era. As Sunita pointed out in another review it makes historic sense for religion to be such a major part of Gracie’s life. I wasn’t sure why Logan is made half Irish and half Mexican. He thinks just a little about how he’s lost this side of himself since moving to the US but that’s about all. His casual move to using first names and uttering profanities at times jared me out of the story, especially when his manners were complimented earlier.

What Gracie and Logan do have in common is wondering where their place is in this unsettled country and what kind of life it will be. They do get time to know each other before the sex but it still felt a twinge fast. Going west is probably the best and only place for an interracial marriage to be accepted but given the other issues and one major hurdle the story raised for them, Gracie’s sudden change of heart was too quick for me. C+

Drifting to You, by Kianna Alexander:
During the sultry Carolina summer of 1875, baker Rosaline Rhodes boards a Juneteenth cruise down the Cape Fear River. She’s there to serve her famous cinnamon spice cake; shipbuilder Will Pruett is there for pleasure. They’ve denied their mutual attraction for months, but now the river won’t be the only thing ebbing and flowing.

Both Will and Rosaline are former slaves who have taken their talents and skills and forged successful lives as free people. They’ve been aware of each other and flirted a little for months. Plus Rosaline’s got some spicy dreams of Will that wake her in a sweat. Will has a past lost opportunity for love haunting him which spurs him on to declare his feelings for Rosaline. She has some horrible experiences from her days as a slave holding her back and shattering any romantic fancies. The story ends up being a strange juxtaposition of riverboat lore and knowledge x with their heart wrenching memories of slavery plus Rosie seeing off a cardboard, boorish, young suitor villain. But his unwanted attentions do make Rosie realize she’s not going to miss her chance at true happiness with Will. I do wish they had spent more time together in the story instead of just talking about how they’ve noticed each other over the past months. B-

A Sweet Way to Freedom, by Piper Huguley:
In 1910, schoolteacher Missouri Baxter refuses to return home with a big belly and no husband. She’s got nine months to teach juke joint owner Arlo Tucker—a most reluctant student—an important lesson about what marriage means to their people. With God on her side, she’ll show him “A Sweet Way to Freedom.”

Missy thought herself in love with someone deliciously different but who also shared her desire to do more and be more for their people and to go to more places than a small Georgia town. Arlo is like a tall, sweet drink of trouble but he’s also a man afraid that he can’t be who he thinks Missy and her baby need. I love that Missy’s got fire in her and won’t cower from the Church matrons over her unwed state nor settle. She gets Arlo to see how right life will be for them and make the decision himself rather than forcing it on him. She also gets him to understand that he needs to do right by his other daughters as well. This story is full of strong women but Miss Annie the midwife is the character who turns out to be my favorite. I hope we see more of her in your next book. The evocation of time and place is immediate and the writing made me wish this one would keep going. B+

Let It Shine, by Alyssa Cole:
Sofronia Wallis knows that proper Black women don’t court trouble by upending the status quo, and they most certainly don’t associate with roughneck Jewish boxers like Ivan Friedman. But it’s 1961 and the Civil Rights movement is in full swing. Change—and love—are coming whether Sofie is ready or not.

Here we have two minority outsiders in tumultuous times. Ivan and Sophie have a shared past and shared loss in her mother’s death. And it’s Ivan who – deep down – really knows Sophie even though it’s been years since they have seen each other. He knows she’s no meek and mild woman, that she’s got fires banked inside just waiting to be fanned into a bonfire. He and the Freedom Rides will be what sets her ablaze. The heat of the scene between them as Ivan teaches Sophie how to handle herself in the potential violence of a sit-in is steaming and what a genius way to show it. Is it twisted of me to say it makes total sense and is far more realistic than the usual “let’s get the hero and heroine physical” historical scenes? If so, sue me. The intensity of the emotions between them in the boxing ring scene almost had me fanning myself.

Both Ivan and Sophie have to face the disappointment of their fathers and face the disappointment they feel at their fathers. Sophie’s dad wants a perfect young daughter who keeps her head down and her white gloves on. Ivan’s father wants his son to stay out of a battle that he sees as not theirs. That they still don’t come around until years later is realistic and brings the story up another notch since it avoids an easy “feel good” quick ending. But you’ve made me see the connection and love between Sophie and Ivan so well that I knew they’d prevail even in the face of so much against them. This one is a jewel. A

The issues facing the characters from all the novellas aren’t easy to read nor should they be for that would cheapen the reality of them. The stories are depictions of steps taken along the way in roughly the first hundred years since Juneteenth. Let’s celebrate that with this anthology. Then let’s progress more.

→ Jayne
Previous article: Tired of being sleek and mobile? Carry a typewriter around.
Next Post: DAILY DEALS: Paranormal, Suspense, and Contemporary Box Sets