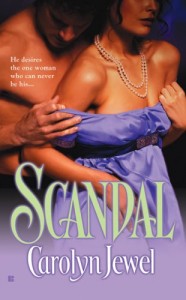 Scandal is the first book of yours I have read, but it won’t be the last.

The book begins when Gwilym, Earl of Banallt, arrives at Havenwood in autumn of 1814. Banallt is a guest of John Mercer, who does not realize that his widowed sister Sophie has a previous acquaintance with Banallt.

When she was only seventeen, Sophie ran off with a fortune hunter and married him over the anvil at Gretna Green. It created a scandal, and Sophie was cut off by her family. It was during the years of her marriage that Sophie became acquainted with Banallt.

It is clear from the very beginning that although he has not seen her in two years, Banallt had strong feelings for Sophie. He hopes that seeing her will confirm his hopes that those feelings are now dead and gone. Banallt, who was also married when he first met Sophie, is now widowed and needs to marry again soon in order to continue his line.

But when he sees Sophie, Banallt realizes that his feelings for her are still alive and acute. Acting on a powerful instinct, Banallt asks Sophie to marry him. But Sophie refuses.

Sophie’s marriage was an unhappy one. Her husband cheated on her constantly, drank and caroused and wasted her dowry. Sophie lived separately from her husband in the country, and took refuge in the novels that she secretly wrote and sold in order to supplement her meager income.

Banallt was a friend of Sophie’s late husband, and despite the fact that he was married at the time, he was also a rake. Sophie and Banallt met when Sophie’s husband brought his friend to his country home. After his first attempt to proposition Sophie failed, Banallt became her friend. Their platonic relationship was a comfort to Sophie, until the day Banallt did something (what it was isn’t revealed until the end of the book) that brought an end to their friendship.

Now Banallt knows he should forget about Sophie, but he simply cannot. When they meet again in London, they are pulled toward one another. Banallt wants to prove to Sophie that he is no longer a rake. Sophie tells herself that she doesn’t want anything to do with Banallt, but the truth is more complicated than that. She is afraid to trust again, afraid that she will be as devastated as she was in her marriage to her husband.

In London, Sophie is pursued by two other gentlemen. Her brother’s mentor, the older Duke of Vedaelin, and Reginald Tallboys, a younger man. I appreciated that neither of these man was portrayed as a villain simply because he was competition for Banallt. Instead, they were both good men who simply didn’t engender the same feelings in Sophie that Banallt did.

There are two interesting subplots. One is about Miss Fidelia Llewellyn, Banallt’s goddaughter, and Sophie’s brother John, who love each other but face the obstacles of Fidelia’s disapproving father and the fact that their marrying would make Sophie and Banallt relatives. The second involves the young Miss George who is pursued by a fortune hunter who reminds Sophie of her late husband Tommy.

A bit past halfway through the book, there was a major plot twist that I didn’t see coming at all. I won’t reveal what it was, but I liked how bold and unexpected it was.

The characterization in this book was also quite good. Banallt’s love for Sophie and his need to prove himself to her was very compelling, as were Sophie’s conflicted feelings for Banallt and her fear that if she gave him the opportunity to do so, he would break her heart.

The story reminded me a bit of some of Mary Balogh’s earlier works, because like those, it was an emotional tale that sometimes put the characters through painful situations, and as in those books, readers are given a window into the characters’ thought process.

Really, if I were to compare this book to food, it would be a classic dish, well-executed. The sort of dish that makes you realize how it got to be a classic in the first place.

I couldn’t agree more. I loved the smoothness and elegant simplicity of your writing. There was a seamless quality to it that, along with the emotional aspects of the story, made the book wholly absorbing, and I stayed up until 3 AM in the morning to finish reading it.

My only major reservation is that I would have liked to know more about Banallt’s first wife and his marriage to her. Had she loved him? Had his infidelities hurt her? Were they very young when they married? Did she remain faithful to him while he strayed? I may be wrong, but I don’t think it was even mentioned how she died, or what her name was.

Besides that I have a couple of very minor quibbles. I would have liked for it to be explained why the duke had sent Sophie flowers and seemed smitten with her before he ever met her, and I was jarred when Tallboys (toward the end of the book) tells Sophie that he had no idea about John and Fidelia’s feelings for one another, when, in an earlier scene, he was the one to tell her that the two were in love.

On the whole though, I felt that these were minor bumps in an otherwise smooth ride, and I found Scandal very rewarding. Thank you for writing such an absorbing, rich and emotional book. It was a journey well worth taking. A-/A.