REVIEW: People of the Book by Geraldine Brooks

I had initially become interested in reading this book after seeing it listed at Fictionwise as a pre-sale item. Right after that it dropped off their site and the possibility of an ebook seemed to vanish into thin air. Don’t know what happened with that but when I spotted it in my local Waldenbooks – and on sale! – I clutched it to my bosoms and headed for the cashier. It turns out to have been an excellent purchase.

On page 195 of my copy, you have a character neatly summarize what I think is the main theme of the book. The fact that I’m about to hand type half a page of text shows how meaningful I think it is.

“You’re right, I said. “It would be something, to be back there, when the haggadah was till just some family’s book, a thing to be used, before it became an exhibit, locked up in a vitrine…”

“Oh, I don’t know,” Raz said. He was poking at the vindaloo suspiciously. He served himself a scant spoonful and loaded the rest of his plate with dal. “It’s still doing what is was meant to do, or it will be, as soon as it goes into the museum. It was made to teach, and it will continue to teach. And it might teach a lot more than just the Exodus story.”

“Well, from what you’ve told me, the book has survived the same human disaster over and over again. Think about it. You’ve got a society where people tolerate differences, like Spain in the Convivencia, and everything’s humming along: creative, prosperous. Then somehow this fear, this hate, this need to demonize ‘the other’ — it just sort of rears up and smashes the whole society. Inquisition, Nazis, extremist Serb nationalists … same old, same old. It seems to me the book, at this point, bears witness to all that.” 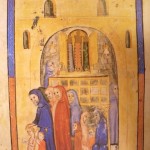 The “People” of the book turns out to be everyone. Not only Jewish people but everyone who had a hand in creating or saving the book. Ozren who dodged snipers and RPGs to get it out of the library in Sarajevo, Serif who calmly smuggled it past the Nazis, poor Mittle who initially rebound it despite the effects of his disease, Venetian Judah Aryeh who gambled with Vistorini for his signature to save the book from the Catholic bonfires, meek Sparrow who alone survives her family’s destruction as the Jews are caste out of Spain, Zahra bint Ibrahim al-Tarek who desired to repay the Jewish family who provided her with a refuge when Al-Andalus fell to their Catholic Majesties, even Werner who couldn’t risk the book falling prey to ethnic warfare because of the work he’d had to do in WWII.

And of course Hanna who is driven not just to rebind and conserve it but who itches to know everything she can discover about who’s handled it in the past. To know how the different, minute things she finds among the pages got there and what stories they have to tell.

I will admit to hating Ozren and Werner for what they do to Hanna’s confidence and belief in herself. And yet, that plus the knowledge she gains about her father steer her in a totally new direction to do work that is as vital to the culture of humanity as is the Haggadah.

Hanna’s relationship to her mother is sad and even depressing. And it doesn’t show neurosurgeons in any great light either. The decision Hanna’s mum made staggers me though of course not as much as it sideswipes Hannah. Here’s one woman who really does think she’s God. “Ozren had been right about one thing: some stories just don’t have happy endings.”

I loved reading about people’s reactions to the Haggadah. Its antiquity, its history, its beauty – the sheer number of miracles required for it to have survived such turmoil’s over the centuries when so many other books didn’t. And that depresses me too – to think of how many books we’ve lost: beauty and knowledge, the hard work of craftsmen gone forever. It brings back my awareness of just how damn lucky I am to have so many books. Not first editions or rarities of course, nothing that would make a collector drool but any book. Books make me so happy that I can’t imagine living in an age when so few had any at all. The thought of deliberately destroying or discarding books still makes me pause and my soul curl up a little. 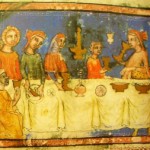 I love that perhaps the least celebrated person in its history is the one to rescue it from obscurity. Lola has survived much herself and yet now she takes pleasure in making sure the Yad Vashem museum is tended so that the history of the Jews’ near destruction will forever be retained. And it is she who, in the end, ‘saves’ the book.

I did laugh my ass off at the description of Massachusetts drivers by people from neighboring states as “Massholes.” This is the second book I’ve read in recent weeks which has denigrated their driving. Massachusetts people, is this correct?

I think you do a marvelous job imagining what might have occurred during the Sarajevo Haggadah’s journey through history. We’ll probably never know for sure exactly what stories it could tell if it had speech. But your mixture of historical information, actual occurrences and ‘just perhaps’ was an entertaining and informative trip. A

This book can be purchased in hardcover from Amazon or Powells. Ebook link mysteriously disappeared.