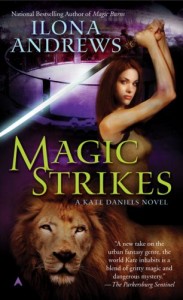 It’s no secret that I’m a big fan of your writing. I was thrilled to beta read Magic Strikes about a year ago. I remember being very impressed by the quality of your manuscript and gave quite a bit of positive feedback. I was happy to discover that the changes made since then have only made it better.

Magic Strikes is the third book about Kate Daniels, kick ass mercenary, and Knight of the Order of Merciful Aid. Book 1 dealt with Kate’s quest to find her guardian’s killer, a search which brought her to the Pack and the Beast Lord’s attention. In Book 2, while Atlanta is gripped by an intense wave of magic known as a flare, Kate’s ties to the Pack continue to grow when she joins up with them to save the city.

Book 3 begins about two months after the events in book 2. Atlanta is still recovering from the backlash caused by the flare. Kate is keeping busy, running from one emergency to the next, and getting very little sleep in between. One such emergency pops up when she is called to rescue her werewolf friend Derek from the always-unpredictable Saiman. It seems that Derek was planning on stealing Midnight Games tickets so that he could speak with a girl on one of the participating teams.

The Midnight Games are an illegal tournament where individuals and teams, made up of the paranormal community, fight and kill for bloodthirsty crowds. Kate attends the Games with Saiman to offer her insight on a surprisingly skillful team known as the Reapers. When Kate is attacked after the Games, she begins to realize just how serious a threat the Reapers are. Her suspicions grow when she realizes that Derek is somehow involved.

However, Derek isn’t the only shape shifter acting a little strange. Jim, the Pack’s Chief of Security, hasn’t been himself lately. While returning home one night, Kate stumbles upon a shifter crime scene investigation. What’s odd is that Jim fails to report the crime to either the proper paranormal agency or to Curran, the Beast Lord. When the next attack hits a little closer to home, Kate must decide between confiding in Curran and trusting her friend and former partner.

The conflict in this book brought with it some very exciting developments. The Reapers are a satisfyingly dangerous group of villains. Their origins were intriguing as was their flat out creepiness. Unfortunately, the most interesting aspect about them is too spoilerish to discuss. But I will say that the catalyst behind the Reapers’ actions, and certain events which unfold right at the very end, have me eagerly awaiting book four.

I continue to love Kate more and more in each book. Her narrative voice, while still given to some snarkiness and frequent quips, has matured a bit. Part of that is due to her increased willingness to open herself up to other people. Whether it’s her protectiveness of her adopted daughter, her fear over a friend’s welfare or her ability to admit to a certain amount of vulnerability where Curran is concerned, Kate has become more likable for the small cracks in her armor.

The kickass uber powerful UF heroine is a character that many authors have tried on for size. And while I’ll admit to a certain amount of fondness towards said character, it doesn’t always work for me. Some authors walk the thin line of attitude and bitchy immaturity, with many falling on the side of the latter. What I like about Kate is that while she may give attitude, she does so for a reason and she does it with humor. And although she may have an array of ever increasing strengths and powers that could make some readers skeptical, she remains one of my favorites, because, as we see in this book, even our uber powerful UF heroine Kate isn’t invincible.

I haven’t really talked much about the Midnight Games, and I shouldn’t. The less said the better. They, of course, play a prominent role here with Kate becoming increasingly involved in conflict surrounding the tournament. I thought The Games were fun, intense, and intensely fun.

I very much enjoyed reading the first two books in your series, but this one is now my favorite. From the first page to the last, Magic Strikes was a riveting, heart pounding ride. Story lines advance, truths are admitted, intriguing characters are introduced and the romance between Kate and Curran develops a sweetness that is simply delightful.

The writing is concise, finely worded and carefully constructed. You pack more in a single page than some authors do in ten. In short, a thoroughly satisfying addition to your series. A-