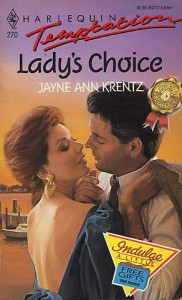 This book was published in 1989 but I don’t think I read it until the early 1990s. My copy was used and I recall that I had purchased it used in its original Harlequin Temptation iteration. Since that time, it has been re-released by Harlequin at least twice more. I anxiously await for it to come out in ebook format. (Hint. Hint.)   The thing that I remember most about this book is that it was the first one that started out with the hero and heroine in bed together.

Juliana Grant is a tall, confident, passionate business woman.   When Travis Sawyer first met her, a relationship is that last thing on his mind but she embodied everything he had ever wanted in a woman.   Travis, a business consultant, had sought out Juliana because she was the only member of the Grant he had not yet met.   He begins to woo her under the guise of offering his consulting services for her burgeoning coffee shop empire.   Travis plans to crush the Grant family because they promised him a part of the business when he saved their bacon but reneged when his engagement to Juliana’s cousin fell through.

Juliana was unaware of the debt her family owes Travis or that Travis is still seeking his pound of flesh. The problem is that Travis is too good by half in his revenge plans. He finds himself helplessly ensnared by Juliana and when he finds that his plans for revenge imperil her business prospects, he works feverishly to prevent the impending disaster he set in motion.

This book was unconventional in many aspects, not the least of which was Juliana’s absolutely wonderful fierceness.   She was a very good businesswoman even if she secretly wanted to a tea empire and not a coffee shop empire.   She wasn’t shy about taking her passion, telling everyone that she loved Travis, assuming that he loved her back and proceeding to plan their life together.   She was an unstoppable force. I loved that both believed that they had found the one true mate for themselves and in a genre filled with the possessive being tossed about by the heroes, it was especially piquant to have the heroine be espousing it:

Because she knew beyond a shadow of a doubt that this particular   man-‘this hard, lean, sexy man     named Travis Sawyer-‘was the   man. The right man. The one she’d been waiting for all her life.

She savored the delicious secret and held herself very still so as not   to awaken the exotic creature lying next to her. She wanted a moment to   luxuriate in the thrilling certainty that she had finally encountered   her true mate.

He was not exactly as she had fondly imagined over the years when she had indulged in a little harmless fantasizing.

The scene goes on with Juliana comparing Travis’ appearance to that of her dream man from his height (only a bit over 6 feet) to his eyes (gray and not her preferred hazel) to his hair (severely cut black versus blond) to his lack of interest in clothes.

There were a few other minor discrepancies   between the real Travis Sawyer and Juliana’s fantasy     version   of her true mate. If she were inclined to be picky, for example, she
could have carped about     the undeniable fact that his rough, grim looks   would probably forever keep him from gracing the cover     of Gentlemen’s   Quarterly magazine. Ah, well, it was GQ’s loss, she told   herself. He looked   perfect     here in her bed.

Juliana’s unabashed embrace of her own sexuality, her own self worth and of Travis always makes me smile.

The revenge plot is also a bit unique because from the very first pages Travis already has regrets over his plans now that he has met Juliana, someone he never thought he would find in all of his life. He wants to capture her passion and loyalty and hold it fast to him. He’s never had someone like Juliana fight for him, over him or even with him and he wants it even more than he thought he wanted revenge.   The true irony is that his plans for destroying the Grants might spell his own demise.

There is a great scene in which Travis thinks he has lost Juliana and he prepares to leave in his very staid automobile when Juliana comes storming out of the country club after him like a Valkryie.   She throws herself on the hood of the auto:

“You’re engaged to me, you bastard,” she yelled back through the   windshield. “You can’t walk out on     me like this. I deserve an   explanation and I’m warning you right now, whatever that explanation   is, it won’t be good enough. Because we aren’t just engaged, we’re   partners, remember? You might be able     to end an engagement like this,   but you can’t end a business relationship so easily.”

Travis response is the only he can give:

The only thing that made it possible for Travis to hang on to his   self-control was the sure and certain knowledge that if he lost it now,   he would never be able to regain it. He looked up at the magnificent   creature standing on the hood of his car and felt the blood pounding   through his veins. Her hair was a wild, crazy shade of orange in the   glare of the parking lot lights. Her shoes sparkled garishly as if   they’d been coated with some sort of cheap glitter dust, and the huge   satin bow at the back of her green dress had come undone.

Travis knew he had never in his life wanted a woman as badly as he   wanted this one.

The one draw back to this story is that Juliana’s cousin and her family are really bastards and they never really get the comeuppance they deserve.

I see so few truly assertive heroines in romance that Lady’s Choice is one I’ve savored since the first that I read it so many years ago.   Travis was a great match for her and in the end, no reader ever doubted the depth of their love for each other or the likelihood of that ever after happiness.